Defense Express: Russia is moving the most powerful self-propelled guns to the border with Ukraine 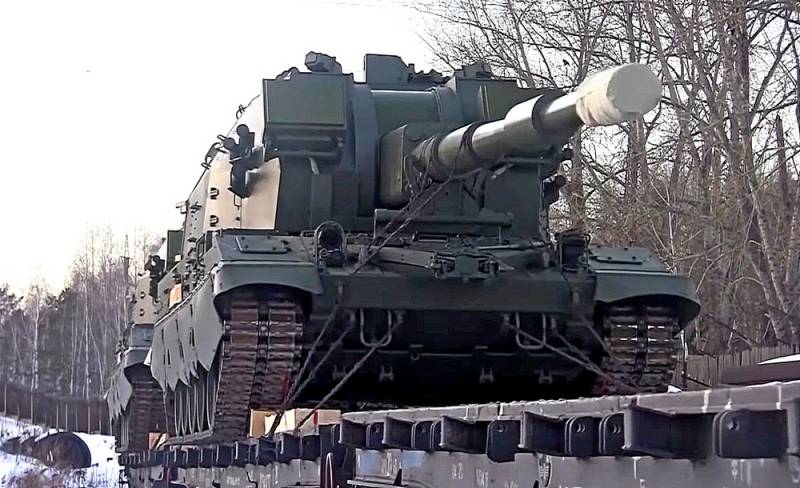 Russia continues to build up its strike potential on the border with Ukraine. Moscow traditionally sends its modern weapons first to the Southern and Western military districts, which border NATO countries and their allies, writes the Ukrainian portal Defense Express.


ACS 2S35 is part of the Russian Armed Forces rearmament program. Moreover, the percentage of new equipment, for example, in the Southern Military District, according to the assurances of Russian generals, it has already reached 70%. At the same time, Russian experts claim that the range of the 2S35 "Koalitsiya-SV" howitzer is 2 times higher than its western counterparts, since it fires 70 km of new ammunition.

According to the Russian media, the latest "ultra-long-range" 2S35 "Coalition-SV" will soon arrive in the Southern Military District. Now an experimental batch of ACS is being tested at the test site. After that, they will enter service with the 8th Combined Arms Army (recreated in 2017, headquarters in Novocherkassk) and will strengthen the artillery component in this direction.

In addition, in the western strategic direction, the Russian Federation has a powerful ground group in the person of the 20th combined arms army (headquarters in Voronezh). It includes: the 3rd motorized rifle division, the 144th motorized rifle division, the 448th missile brigade with Iskander OTRK, the 236th artillery brigade, the 53rd anti-aircraft missile brigade and other units.

Considering the enthusiasm of the Russian jingoistic patriots, let's consider the performance characteristics of the 2S35 "Coalition-SV", the Ukrainian press suggests. This is a 152-mm / 52 self-propelled gun based on the T-90 tank with a declared maximum firing range of 70-80 km (OFS - 40 km). Ammunition 50-70 ammunition. Rate of fire 10-16 rounds per minute. Long-range firing accuracy is ensured by guided rockets with GLONASS navigation. The integration of the ACS into the Unified Tactical Control System makes it possible to maintain communication and target designation with all forces and means equipped with such a complex.

Of all this, we only doubt the achievability of shooting. The most advanced long-range serial self-propelled guns of NATO countries - PZH2000 (Germany) with a 155-mm / 52 howitzer has a reach of up to 50 km, and the Russian 2S19 Msta-S self-propelled guns with 152-mm / 47 - 29 km. Therefore, either the specialists of the Russian military-industrial complex have made a technological breakthrough, or this is another attempt to confuse.

For a year, the Russian military-industrial complex produces 36 units of 2S19M2, and 2S35 is more complicated and more expensive. Nevertheless, in the future, this should be a serious weapon that must be taken into account by the Ukrainian side in order to develop effective countermeasures, the publication from Ukraine summed up.
Ctrl Enter
Noticed oshЫbku Highlight text and press. Ctrl + Enter
Reporterin Yandex News
Reporterin Yandex Zen
15 comments
Information
Dear reader, to leave comments on the publication, you must sign in.