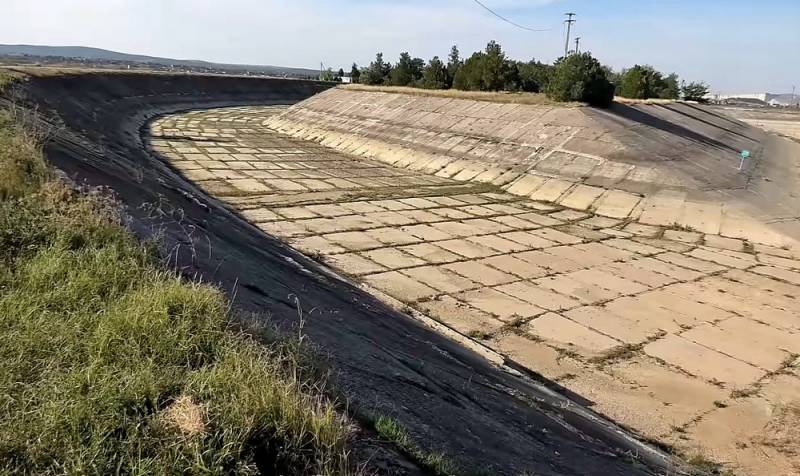 The dry summer of 2020 is over, but the problem of water supply in Crimea is still urgent. In the resort towns of the peninsula, water is supplied only for a couple of hours in the morning and evening. What will happen in the summer of 2021, which may be no less hot and dry than the previous one?


Problems for the Russian Crimea were created by his "evil stepmother" Ukraine, which cut off water supplies through the North Crimean Canal. So far, no one has died of thirst, but the damage to agriculture and the ecology of the peninsula was catastrophic. What is the value of the cloud of acid fumes over the city of Armenian, formed due to the shortage of fresh water in the waste storage facilities of the Crimean Titan enterprise in 2018? The main culprit of the unfavorable situation on the peninsula is undoubtedly Kiev, but a considerable share of the responsibility of our regional authorities and federal authorities cannot be denied. Six years have passed since the annexation of Crimea, and things are still there.

The simplest and most logical solution would be to accuse Ukraine of the genocide of the population of the peninsula as revenge for their political choice and take control of the infrastructure of the North Crimean Canal by the forces of the RF Ministry of Defense. However, the Kremlin is clearly not ready for such a tough scenario. The option to build a water pipeline from the neighboring Kuban is also subject to justified criticism, since the ecological situation on the rivers of the Krasnodar Territory is not the best, and the locals themselves do not have enough water there. Large-scale digging of artesian wells in Crimea has shown itself from the negative side, because due to the mineral composition of groundwater, a gradual and constant salinization of soils occurs, which leads to their sterility. So what is left then?

Currently, there is a discussion on the need to include the problem of water supply in Crimea in the federal target program for the development of regions. If a decision is made, within the framework of the FTP, it will be possible to carry out several measures that can resolve the issue of water supply to the peninsula once and for all.

At first, there is no doubt about the need to repair and modernize the existing pipeline networks. Water losses during transportation through them in places can reach 40-70%. It's like carrying water in a sieve. At the same time, it would be nice to solve the problem with the Crimean sewage system. Swimming in the rivers of the peninsula and in the Black Sea water is not psychologically very comfortable if you know its real composition.

SecondlyIf you take into account the military scenario of the return of water supplies to the peninsula, the most realistic peaceful scenario is the desalination of seawater. It has been said about this for a very long time, but some steps began to be taken only at the end of last year, when the problem against the background of little snowy winter and summer drought became simply glaring. It is not yet clear whether the issue of the construction of desalination plants will be resolved on its own, or some foreign partners will be involved.

Israeli companies that have a lot of practical experience in this matter are asking themselves, but will they agree to work in the sanctioned Crimea? It is possible that the United States will impose restrictive measures on those business structures that may show interest in the peninsula themselves or provide equipment and Technology... Obviously, this problem will have to be solved somehow, and it will take a lot of time.

It is not surprising that in our country they are gushing with alternative ideas for water supply to Crimea. We again returned to the idea of ​​"irrigating" the peninsula, artificially causing rain. No, we are not talking about prayers, this stage with a direct appeal to the "Heavenly Chancellery" the leadership of the Republic has already passed in 2020. Last summer, a specialized Yak-42D aircraft belonging to Roshydromet flew to Crimea. Its task is to treat clouds with silver iodide squibs in order to cause pouring rain from them. Then they did not have time to test the plane in business due to bureaucratic red tape, but in 2021 the experiment could still take place. Experts point to the experience of China, which relies on meteorological aviation, with whose help Beijing intends to "water" more than half of its rather large territory.

Whether it will succeed in Crimea, we will see. Meanwhile, even more exotic ideas sound. It is proposed to install "chimneys" near the Crimean coast, some specialized floating platforms that will fumigate clouds going towards the peninsula so that rain will pour out of them. True, in practice this can only work with a large number of these very "chimneys" that still need to be built, taking over the already small capacities of the domestic shipbuilding industry. Then the Crimean water will become truly "golden", and the budget money will go down the drain in every sense.
Ctrl Enter
Noticed oshЫbku Highlight text and press. Ctrl + Enter
We are
They want to solve the water problem of Crimea in the traditional way
Peace enforcement operation. Russia inflicts a preemptive strike on Kiev
Reporterin Yandex News
Read Reporterin Google News
84 comments
Information
Dear reader, to leave comments on the publication, you must sign in.