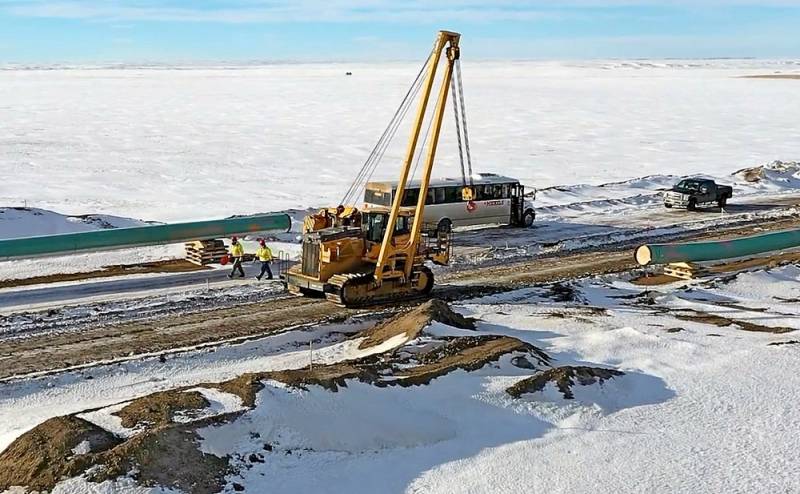 President Joe Biden famously kicked off his presidency by turning a valve on the Keystone XL pipeline from Canada to the United States from day one. If Washington did not regret its closest and loyal allies in Ottawa, then what to expect from the American Democratic Party of Russia?


The Keystone Pipeline network connects the refinery with the oil-bearing provinces of Canada and the United States, and also has access to the ports of the Gulf of Mexico. Its fourth phase involved the construction of an oil pipeline from Alberta, Canada to Nebraska, to a refinery in Steel City. The length of the pipe was to be 1,9 thousand kilometers with a daily pumping capacity of 800 thousand barrels. This project would seriously simplify the delivery of raw materials to Ottawa, as well as reduce the cost for American refineries. The surplus of Canadian oil could be exported from the United States. It is estimated that the construction of such a large-scale oil pipeline could create an additional 28 thousand new jobs.

Despite the obvious economic benefit, Democratic President Barack Obama rejected the application in 2012 on environmental grounds. The "Imperial" Donald Trump, on the other hand, revived the project in 2017. At the same time, construction of the Dakota Access oil pipeline in the northern United States began under him. However, in the summer of 2020, when President Trump was already cracking his seat, the Dakota Access project was stopped due to protests from Native Americans. As soon as Democrat Biden officially entered the White House, he closed the Keystone XL pipeline. But why is Washington today shooting itself in the foot and complicating relations with its friendly neighbor?

In order to understand his motives, it is necessary to consider the general context. The main competitors of the United States, China and the European Union, as well as such developed countries as South Korea and Japan, have set an ambitious goal of achieving zero carbon dioxide emissions in production by 2050. Beijing, however, talks about the turn of 2060, but this does not change the essence of the matter. Fundamentally, the very structure of the world economy will change irreversibly. Leading powers today are actively investing huge amounts of money to ensure that their products meet the latest environmental standards. Obviously, the cost of production will seriously increase in this case, and in order to remain competitive in the world market, the largest players will introduce so-called "carbon taxes" for those who do not comply with them.

Under the Democratic Party, the United States is undoubtedly trying to play ahead of the curve in order to set these environmental standards themselves, which should then become mandatory for everyone else. In the next 10 years, Washington plans to invest in Technologythat will bring fossil fuel consumption to zero, a whopping $ 5 trillion. It is clear that large-scale oil pipelines, despite their medium-term profitability, do not fit well into this concept of a “brave new world”.

By the way, our country with its oil and gas pipelines will not fit in too well. The Europeans have already directly warned Moscow that the consumption of hydrocarbon raw materials will constantly decline. This suggests an idea to build more wind turbines and solar panels in an accelerated manner in order to increase the share of "green energy" in Russia, which can be used in the production of "green hydrogen" and thus maintain our share in the EU market. It is clear that this is a huge investment that only the state, represented by corporations, can do. Logically, then the federal budget should also receive the final profit, right?

In my understanding, the authorities have shown helplessness, weakness and made a gross mistake. As a result, nothing was done. As a result, the EU introduces a cross-border carbon tax, and Russian businesses will pay. Will pay. Only they will pay not their own government, but someone else's. The government's mistake, when what could and should have been commercialized, the government could not commercialize.
I would like to note that Anatoly Borisovich, who is now in the status of an "international negotiator", has been heading first one state corporation, then another, for all the past years, and therefore is in some way involved in such a deplorable result. And his recipe is still the same, proven: "commercialize." If anyone does not understand, we are talking about the next privatization of state property into "terribly effective" private hands. This is our response to the global energy initiatives of the US, EU and China.
Ctrl Enter
Noticed oshЫbku Highlight text and press. Ctrl + Enter
We are
Peace enforcement operation. Russia inflicts a preemptive strike on Kiev
Europe without a Russian trumpet - the epiphany of Britain and the fantasies of Poland
Reporterin Yandex News
Read Reporterin Google News
19 comments
Information
Dear reader, to leave comments on the publication, you must sign in.