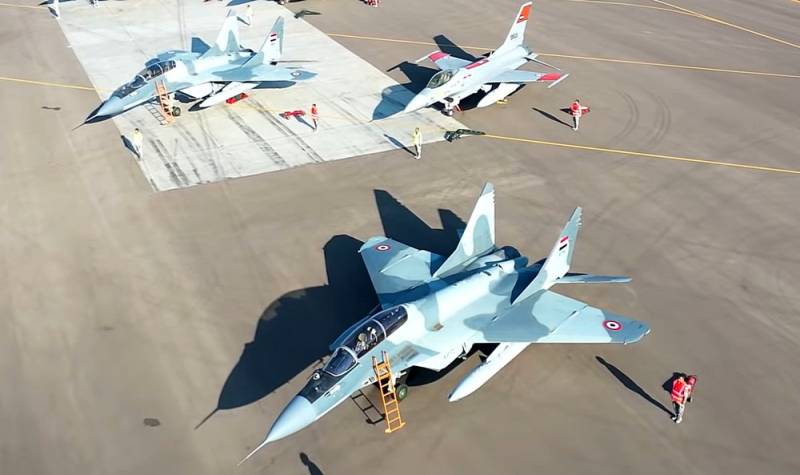 After the overthrow of the Western-oriented Islamist government in 2013, Egypt has moved to closer cooperation with Russia on defense. At that time, the Egyptian Air Force had about 200 American F-16C fighters. But Cairo bought Russian MiG-29Ms, although at that time they did not have any fundamentally new capabilities compared to American combat vehicles. The reasons for the purchase of the Russian MiG-29M by the Egyptians were examined by the Military Watch experts.


Since the mid-1970s, when Egypt ended its defense partnership with the Soviet Union and turned towards NATO, the country has nevertheless been denied access to advanced fighters such as the F-15 Eagle and F-14 Tomcat. On the other hand, such "privileged" partners of the United States as Japan, Iran, Saudi Arabia and Israel received these combat aircraft, which put Egypt at a clear disadvantage compared to its neighbors. Over time, Cairo managed to acquire F-16 fighters, but the Americans greatly reduced the supply of ammunition for them. Therefore, Egypt has decided to buy Russian MiG-29M.

At the time of Egypt's acquisition of the MiG-29, this aircraft was the oldest and least sophisticated Russian fighter, but it represented a major upgrade from the even more outdated F-16C, given the circumstances in which American aircraft were operated. It is important to note that Russia did not in any way limit the use of the supplied combat vehicles by Cairo and did not cut sales of the necessary components.

Moreover, the Russians gave the Egyptians access to the R-27ER and R-77 long-range air-to-air missiles, which, for the first time in decades, provided Egypt with modern capabilities for air warfare. This was vital to maintain a certain parity with the Israeli F-16 and F-15. In addition, the MiG-29Ms purchased by Egypt were more advanced in technical terms than the MiG-29s of neighboring Syria, Libya and Sudan - they had a larger supply of fuel, more powerful engines and modern electronic filling, as well as electronic warfare systems.

The purchase of the MiG-29M largely laid the foundation for Cairo's future purchases of modern Russian combat aircraft - primarily the MiG-35 fighter of the 4 ++ generation, as well as the more advanced Su-35.
Reporterin Yandex News
Reporterin Yandex Zen
4 comments
Information
Dear reader, to leave comments on the publication, you must sign in.