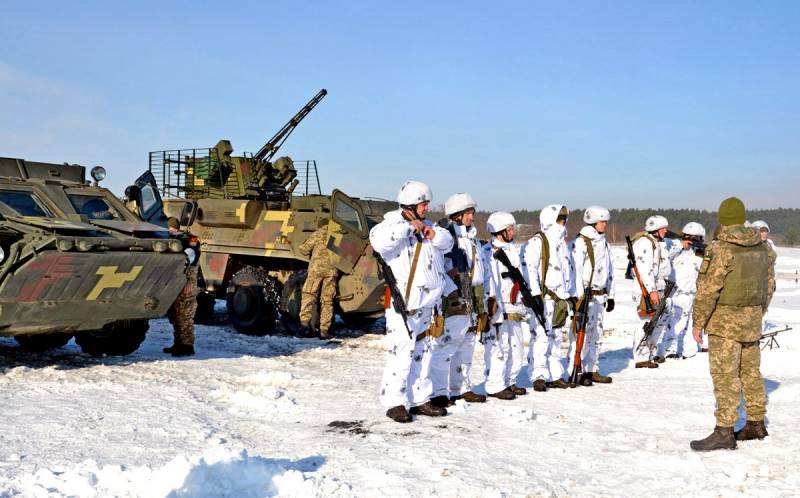 Almost forgotten during the presidency of Donald Trump, Donbass returns to news the agenda. The head of the proclaimed Donetsk People's Republic Denis Pushilin announced his readiness to hold a second referendum on self-determination. The main intrigue is whether the question of joining Russia will be raised at the plebiscite, and how will the Kremlin react to the aspirations of the Russians this time?

I am watching the inauguration of the new US president in the new office on Bankova Street, and I will be glad to welcome Joe Biden to Kiev, well known to him. I am sure our relations will improve.
Indeed, Joe Biden is very familiar with Kiev; during the reign of Barack Obama, he himself, as Vice President of the United States, kicked open any door in the upper corridors of Ukrainian power. It is in the Square that a heap of corruption scandals related to the son of "Sleepy Joe" Hunter stretches. And it was under the democrats in Ukraine that the Maidan took place in 2014, territories were lost, a long-term bloody civil war began, which has not ended to this day.

And now the Democratic Party has returned to power in the United States. Since over the past six years the issue with either the DPR and LPR, or the Crimea, has not been resolved in favor of Kiev, there is no doubt that Washington will again firmly take up this lever of pressure on Moscow. Minsk-1 and Minsk-2 did not help return certain regions of Donetsk and Lugansk regions back to Ukraine. But quite recently, right before our eyes, Azerbaijan was able to resolve by force the long-standing territorial conflict with Armenia over Nagorno-Karabakh. With relative equality of the sides in terms of combat capabilities, the intervention of a third party, Ankara, was enough on the side of Baku, and in 44 days Azerbaijan returned most of the unrecognized republic, and 5 years after the withdrawal of the Russian peacekeepers, it may try to take the rest.

A bad example of resolving a political issue by military force has already inspired Kiev, and then the ideological inspirers of the Maidan and the conflict between Ukraine and Russia have returned to the White House. Over the past 6 years, the Armed Forces of Ukraine have increased their numbers and have seriously increased the level of training, organization and controllability. Let the Ukrainian soldiers and not "john rambos", but they are no longer those hesitant guys who could be safely driven across the field in a white "Niva". And now in Donbass Kiev will begin to incite in Washington, providing him with military support. It is possible that Turkey can also take the side of Ukraine in the war for Donbass, helping the Armed Forces of Ukraine with shock UAVs and its military experts who passed through Syria, Libya and Nagorno-Karabakh.

It is obvious that the DPR and LPR on their own will not be able to withstand such an onslaught. "Vacationers" from Russia are, of course, good, but if the hostilities become large-scale, it is not known how long effective military assistance is possible in such an unofficial format. One thing is good that Donbass has a common border with the Rostov region, in this he was more fortunate than Nagorno-Karabakh or Transnistria.

In this context, it is not surprising that in Donetsk they started talking about a new referendum on self-determination. It is not yet known whether it will actually be carried out, and what questions will be raised in this case. On the one hand, the big mistake in 2014 was to limit ourselves to self-determination and not ask the people about joining Russia. Today the situation is even more complicated, since a significant part of the territory of Donetsk and Luhansk regions is not controlled by the proclaimed republics, and their population will no longer be able to vote. On the other hand, it is not known how this time the Kremlin will react to the results of the referendum. Previously, they limited themselves to "respect", but their results were never recognized. Official propagandists actively promoted the line that "we did not promise anything to anyone." Also popularized was the dubious idea that it was not Russians, but Russian-speaking Ukrainians who were supposedly living in Donbass.

The idea of ​​a new referendum is an instrument of political bargaining with "Western partners" and their puppets in Kiev. If Washington begins to actively use Ukraine against Russia, then a new popular expression of will can indeed be carried out in the territories controlled by Donetsk and Lugansk. It is unlikely that the DPR and LPR will then be automatically admitted to the Russian Federation, but in the event of a large-scale offensive by the Armed Forces of Ukraine with the support of the Turks and Americans, their inclusion as some "federal territories" becomes a little more realistic. The military defeat of Donbass will be a strong image blow for President Putin, but the admission of the two long-suffering republics to Russia to save them, on the contrary, could become a strong PR stunt. This political decision will be supported by the fact that Russian passports are actively distributed in the DPR and LPR, and Moscow should protect its citizens.
Reporterin Yandex News
Reporterin Yandex Zen
67 comments
Information
Dear reader, to leave comments on the publication, you must sign in.