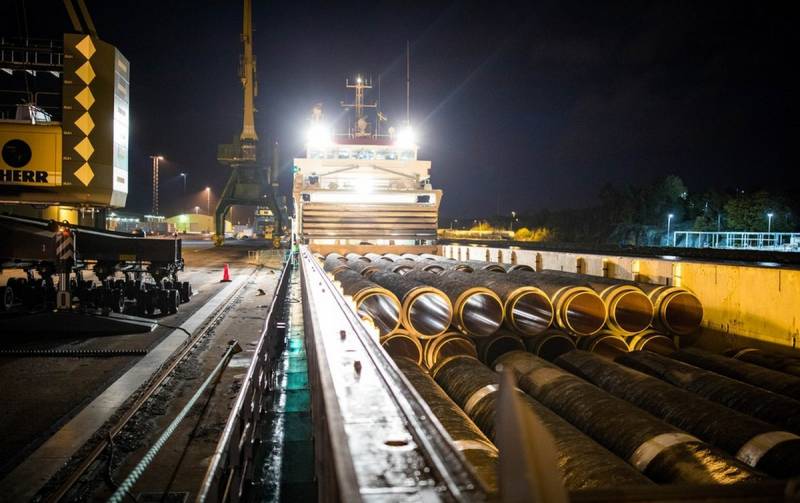 The day before, thunder thundered from clouds thickening over the Nord Stream 2 gas pipeline. At the same time, two events took place: the United States imposed sanctions against the second Russian pipe-laying vessel, Fortuna, and Gazprom, at last, at the official level, admitted that the pipeline might not be completed.


The US Treasury has imposed sanctions against "Fortune", which is now listed among the Americans as "blocked property." Its formal owner is the KVT-Rus company with an authorized capital of 1 rubles and a single CEO and employee in one person. Last good news is that the barge managed to complete the remaining pipe-laying work in German waters. At the same time, two local environmental organizations, the Union for Conservation of Nature and Biodiversity and Deutsche Umwelthilfe (DUH), simultaneously attacked Nord Stream 2 in order to appeal against the permission issued to Gazprom for construction in the German exclusive sea zone. In general, everyone is already accustomed to something like this, but rather unexpectedly, the monopolist acknowledged that due to the increased political risks, the gas pipeline may not really be completed:

In exceptional circumstances, including due to political pressure, such changes may lead to the suspension or termination of the project.
The fact that Nord Stream 2 has a "pipe" case, we write long ago. Does this mean that the previously invigorated management of the state corporation recognized the complexity of the situation? There are different views on this issue.

According to the first, pragmatic, point of view, nothing critical has happened yet. This statement by Gazprom was published as part of the prospectus for the placement of Eurobonds, where the company is simply obliged to notify its investors about the possible risks of investment write-off. European companies have done exactly the same thing. But this does not mean that the project is being drained by the company itself.

The second, more hurray-patriotic approach suggests that in this way Gazprom for the first time decided to publicly pressure its European partners so that they more actively “fit in” for Nord Stream 2. For Germany and all of Western Europe, the gas pipeline has a large economic significance for the coming decades, and for Berlin it is generally an image issue.

The third, most realistic view of the problem boils down to the fact that the management of the state corporation has already begun to prepare "straw" in case of a fall. The United States does not hide the fact that it wants to firmly tie Russia to Ukraine on the issue of gas supplies to Europe. To do this, it is necessary to shut off all bypass pipelines, having previously allowed Gazprom to throw billions of budget funds on them. The Russian company does not have special opportunities to bypass the American sanctions; the sanctions pressure is only increasing. The key question is what will happen next, and there is nothing good ahead.

The transit agreement with Ukraine was concluded for only 5 years, and the first, the most preferential year, has already expired. Now Kiev will have to pay for pumping gas at an increased tariff. Thanks to our "effective top managers" who signed up to these conditions. And what will Gazprom do if Ukraine refuses to renew the contract in 2024? After all, no one has canceled his obligations to supply gas to Europe, the agreement with the EU stipulates that "blue fuel" should be delivered to the border with Slovakia, and transit is the supplier's problem. Also questions to those who could once sign this.

The management of the state corporation has made a bet on the alternative Ukrainian GTS "Turkish Stream" and "Nord Stream-2". If the first is completed with a sin in half and is put into operation in South-Eastern Europe, then the second, apparently, is given up. How Gazprom will fulfill its obligations to the Europeans is unclear. We will have to beg Kiev to increase the volume of pumping, and it will either raise the tariff even more, or refuse altogether, if senior comrades from the United States ask for it. It is clear that this is extremely beneficial for American LNG suppliers, as it will lead to an increase in energy prices in Europe.

And, finally, there is a question about who will pay for the entire banquet with Nord Stream 2. Billions of dollars were thrown into the project, the Europeans, for their part, invested in it in the form of loans issued to Gazprom, plus there are financial obligations to contractors. Refusal to build for political reasons due to sanctions theoretically falls under the definition of force majeure, but it is not yet known what exactly is written in the agreement between the parties. If the company's lawyers did not foresee in advance a serious line of defense in case of a complete failure of the project due to sanctions, then our monopolist will also fly into multibillion-dollar claims from European partners. And this will be a complete fiasco.
Ctrl Enter
Noticed oshЫbku Highlight text and press. Ctrl + Enter
We are
Peace enforcement operation. Russia inflicts a preemptive strike on Kiev
Three years left: Ukraine will be sold in parts
Reporterin Yandex News
Read Reporterin Google News
13 comments
Information
Dear reader, to leave comments on the publication, you must sign in.