Biden's inauguration: Is the US taking a step forward or into the abyss? 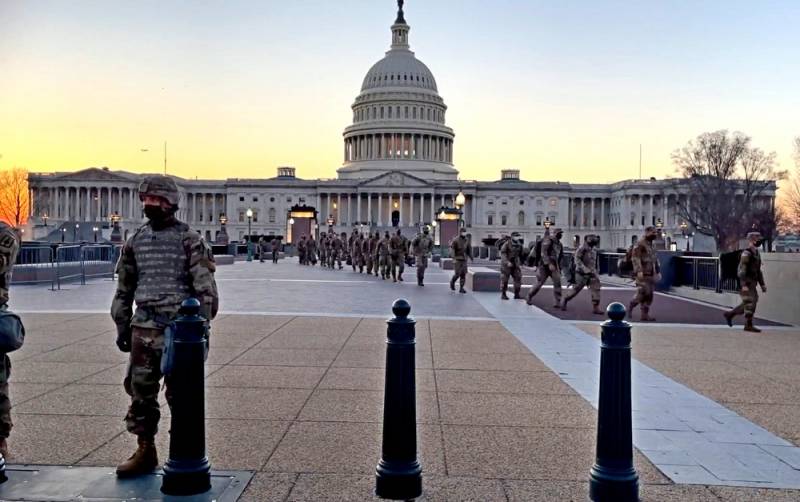 Today in Washington, most likely, the procedure for swearing in the 46th President of the United States of America Joseph Biden will take place. It must be admitted that the new leader is facing the country with such a load of problems, both external and internal, that it did not know the likes of, not only in the present, but also in a much more turbulent last century.


Nevertheless, in the West, the arrival of a new master at the White House is considered a good omen, promising positive changes and new prospects. Optimism is, of course, wonderful. However, it is worth trying to figure out how justified it is in this particular case, and if Biden and his administration have real chances to justify the hopes placed on them.

What is expected of Biden at home and in the world? In fact, the entire wide range of hopes in the new president can be reduced to one, the main thing: he will "fix", "fix", "heal" everything that has ruined, broken, vulgarized and corrupted by his obnoxious predecessor with his ugly "America above everything! ", four years ago, so liked by the majority of his compatriots ... In general, almost according to Nekrasov:" When Biden comes, Biden will judge us. " And many will have to judge - perhaps not a single president over the past 200 years has gotten the United States so divided by racial and political "rifts", so tortured economic and social turmoil. And the coronavirus pandemic, by the way, hasn't gone anywhere either - despite the presence of its own vaccine in the United States, which seems to be recognized as suitable for mass use. It is with her that the newly made "father of the nation", as far as we know, is going to start. Or rather, of course, with the fight against the disease and its consequences - after all, more than 19 million Americans are infected with COVID-23, and the number of deaths from it is approaching 390 thousand.

And here, literally right away, a very significant "weak spot" of the new government appears. It seems that Biden's trouble is that he is going to simultaneously achieve goals that are not only poorly combined, but rather mutually exclusive. As it became known the day before, Biden vowed that he (unlike Trump) "will be guided in his decisions by the data of science and the advice of scientists." In the field of health, "unconditional priority" will receive, of course, the recommendations of experts from the Centers for Disease Control and Prevention (CDC), the National Institutes of Health (NIH) and similar organizations. But there is every reason to believe that the first and main advice that doctors will give to the president will be the tightening of quarantine measures in the country due to the continuous spread of COVID-19.

At the same time, Mr. Biden, with an equally sincere expression on his face, promises the Americans also "saving the national economy", which has received enormous damage precisely from the "coronacrisis". For this he intends to allocate (subject to the support of Congress) the amount of $ 1.9 trillion. In addition to 400 million to "accelerate the pace of vaccination of the population" this includes 350 billion to "help the most affected citizens." In a word, the next "distribution of elephants" is akin to those that were regularly practiced under the now mercilessly criticized Trump and did not really save anything. But the tightening of quarantine will affect the economy immediately and in the most negative way - according to the US Department of Labor, unemployment in the country began to grow rapidly again, and first of all, it is connected precisely with the measures taken by local authorities "to contain the disease" hitting public catering , trade and entertainment industry. Some of Biden's other projects promising a "restart" of the economy, the creation of new jobs and the like also raise considerable doubts.

Most likely, he intends to please those of his fellow party members who, in terms of “environmental extremism,” far spit on Greta Thunberg and dream of making America not great again, but completely “green”. In this case, the whole complex of the US oil-producing and oil-refining industry should not expect anything good. At one time, Donald Trump lifted many bans on the extraction of minerals and the construction of infrastructure for their transportation. Biden, apparently, is determined to return all these restrictions introduced under Barack Obama, and even add fairly new ones. An example is the US-Canada Keystone pipeline. Its construction, estimated at tens of billions of dollars, was “frozen” by Obama and resumed by Trump. The current president intends to put this project on a "stop" again. By the way, he also spoke about a complete ban on shale gas production ... How this is combined with the "revival of the economy", Biden alone knows.

Is the Hegemon returning?

By the worst irony of fate, the event planned in the US capital in too many of its details painfully resembles similar events that took place last year in Minsk. As it turned out, it was in vain that Washington emanated bile and poison over the "inauguration on bayonets" held by Alexander Lukashenko in the midst of the riots organized by the West. Mr. Biden gave the Belarusian "dad" declared by his compatriots a "dictator" and "illegitimate president" a fair head start in terms of militarization and the closedness of the ceremony of coming to power. As already calculated, the army group currently deployed in Washington is much larger than the US Army contingent in Afghanistan. However, the point is not in the number of "bayonets", but in the fact that the United States has finally and irrevocably lost the halo of the "world citadel of democratic values." Democracy is good if its head is forced to hide from fellow citizens behind a two-meter fence, tightly blocked streets and almost a division of the National Guard ... From Biden and his team, "allies and partners" the United States expects no less, but, as it were, no more than the Americans themselves ... They believe that the new US administration will work wonders: NATO, which is falling apart before our eyes, will reconcile and rally again, it will return to the Paris climate agreement, negotiate a new agreement with Iran, and calm North Korea ...

This, however, is not the entire list. Biden is also expected to end the "trade war" with China and "decisive actions" against our country. For example, Bloomberg just writes: "Biden will take up the punishment of Russia immediately after the inauguration." You see, he will put aside the sheets of paper with his own solemn speech, take a bunch of bigger rods - and let the Kremlin arrange a demonstrative whipping! At the same time, all Western dreamers stubbornly ignore the obvious facts. For example, the one that Kim Jong-un, it seems, was just having fun with meetings with Trump, does not seriously think about any "denuclearization" of the DPRK. I won’t be surprised if by Biden’s inauguration they will launch something festive and ballistic - so as not to relax!

Tehran, during Trump's rule, seems to have made significant progress in its own nuclear program, and, most importantly, made sure that the United States with all its aircraft carriers will not take any “forceful” steps, except perhaps for single attacks that look more like terrorist acts. than the actions of a world power, is also unlikely to be as accommodating as before. We'll have to make serious concessions, and for Biden it will mean “loss of face”. As for China, the opposition is also not averse to ending the protracted and already costing economic losses. But - only and exclusively on their own terms. As far as we know, in November 2020, Beijing fulfilled its own annual commitment to export from the United States (which provided for the purchase of additional goods and services for $ 200 billion throughout 2020-2021) by less than 60%. During the conflict, Washington has conducted 11 rounds of sanctions and restrictions on Chinese goods, companies and individuals, bringing their number to 350 in aggregate - an all-time record for the United States. The Celestial Empire was forced to take the most decisive measures to protect its own interests - and it took them.

The past year saw the conclusion of the Comprehensive Investment Agreement between China and the European Union, as well as the establishment by the ASEAN countries of the Regional Comprehensive Economic Partnership (RCEP). Here is another, not so large-scale, but very typical example: Beijing has adopted a "3-5-2 strategy", within the framework of which, by 2022, in all local government structures, a complete replacement of the American computer equipment and software for domestic. As far as is known, the pace of its implementation is fully maintained. After that, hoping that the Chinese comrades will open their arms wide for Biden solely because he appointed Catherine Tai, who is fluent in Chinese, as the US trade representative, is naive to say the least.

This is especially evident in light of recent reports that Biden's nominated Treasury candidate Janet Yellen has already stated that she intends to "use all available tools to combat the abuse and illegal actions of Beijing", which deliberately "undermines the American economy." Somehow not very similar to the end of the conflict, is it? Rather, it looks like an attempt by the United States to return to the world arena in the same role of “hegemon”. If we talk about Russia, then the sharply toughened sanctions demarches by Washington, which has already begun to directly “hit” Nord Stream 2, leave no room for illusions either. However, the reaction, for example, of the Russian Foreign Ministry to the shouts about the arrest of Navalny, which boiled down to the advice “to shut up and deal with your problems,” suggests that there is complete reciprocity here ...

The main misfortune of Joe Biden's team, which is coming into power today, can most likely be an attempt by its head and members to solve all problems by a simple return to the days of Barack Obama. It is not without reason that after the very first appointments, widely announced by the elected president, his future administration in the United States itself began to be referred to as "Obama-3". Nuland alone is worth something ... It is rather strange that people so experienced in policy, stubbornly refuse to understand the absolutely obvious thing - the world is not a film strip or a computer file, which can easily be "rewound" and started again from the place you like. Over the years, it has changed, and irreversibly. Efforts to restore the "status quo" in this matter are simply doomed to failure. Donald Trump, with all his voluntarism, isolationism and other "sins", may have realized that the United States can no longer try to play the role of the absolutely dominant force in the unipolar world led by them. If only because such a world no longer exists ...

Democrats-globalists who brought Biden to power reject such "sedition", as they say, from the doorway. Apparently, they intend not to strive to “make America great again”, but to try again to reshape the Universe for it. This can turn out to be very bad - and, first of all, for themselves.
Reporterin Yandex News
Reporterin Yandex Zen
12 comments
Information
Dear reader, to leave comments on the publication, you must sign in.