Duplicity of the West: demanding the release of Navalny, Assange is ready to jail for 175 years 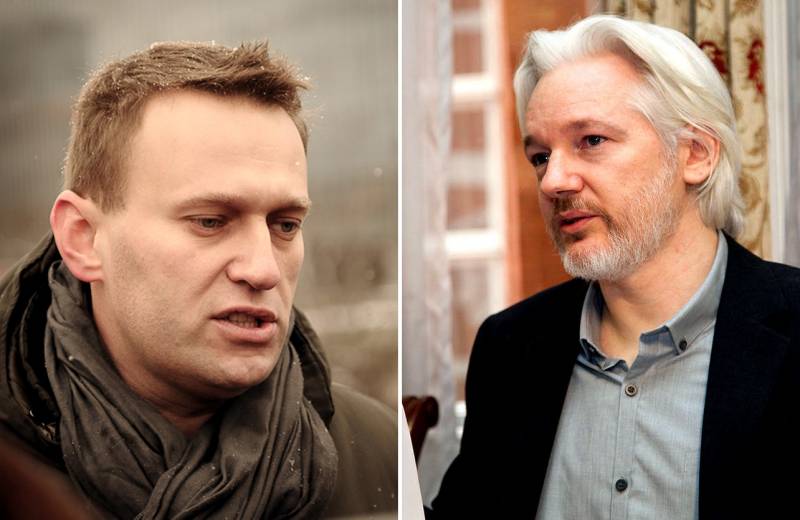 On January 17, 2021, while passing through passport control at Sheremetyevo airport, the famous blogger Alexei Navalny was detained. He has been on the wanted list since December 29 "for multiple violations of the probationary period", to which he was sentenced in the case of "Yves Rocher Vostok" in 2014, the FSIN reported. The service also explained that he will remain in custody until the court determines a preventive measure for violations of the conditions of the probationary period.


And on the same evening, the heads of EU institutions promptly expressed their concern over the arrest of Alexei Navalny, who was on the wanted list, and called for his immediate release. The corresponding statements were spread on Twitter within half an hour after the arrest, the head of the European Council Charles Michel, the EU High Representative for Foreign Affairs and policy security Josep Borrell, European Parliament President David Sassoli.

And the head of the European Council said that "the detention of Alexei Navalny is unacceptable" and called on the Russian authorities to immediately release him.

Similar statements were made by the Foreign Ministers of Lithuania, Latvia and Estonia. And Joe Biden's national security advisor, Jake Sullivan, believes that Navalny should be "immediately released" and "those responsible for the outrageous attempt on his life should be brought to justice."

In response to these calls from the "collective West", Russian Foreign Ministry spokeswoman Maria Zakharova called on Western politicians to respect international law, not to encroach on national legislation and "deal with problems in their own country."

Now let's take a closer look at the attitude of this “collective West” to another blogger, already in their space. And we will talk about the founder of WikiLeaks Julian Assange. Yes, yes, about the same Assange, who was initially for 7 years in voluntary imprisonment at the Ecuadorian Embassy in London, and since 2019 has been in an English prison. And we do not see any angry statements from the EU leadership or the Baltic and American diplomats in the international media. Here again we see double standards.

On June 19, 2012, Assange, who was under recognizance not to leave (roughly like Alexei Navalny), fearing extradition to the United States, took refuge in the Ecuadorian Embassy in London and asked the leadership of the Latin American country for political asylum. The police considered this a violation of the terms of house arrest and announced that he would be arrested upon leaving the embassy.

After the new President of Ecuador, Lenin Moreno, stripped Assange of political asylum, the British police detained the online journalist on April 11, 2019. Then many were struck by the sight of the founder of WikiLeaks, more like a decrepit old man. 7 years in a confined space is hard to endure! No wonder he compared his stay at the embassy with life on a space station.

As a result, a London court sentenced Assange to 50 weeks in prison for violating the terms of bail.

While Assange sits in English dungeons, a former lawyer, common-law wife of WikiLeaks founder Julian Assange, spoke about the bullying he was subjected to in a British prison. On Twitter, Stella Maurice reported that Assange was woken up at five in the morning, handcuffed, stripped naked and X-rayed.

Meanwhile, in the United States, a federal grand jury (the panel of jurors that determines the validity and appropriateness of formal charges against anyone) issued a second indictment, accusing Julian Assange of crimes related to his alleged role in one of the largest thefts of classified information in history of the United States.

Note that although Julian Assange is not even a US citizen, he faces up to 175 years in prison in this country. He is accused of illegally obtaining and publishing classified data (17 points, up to 10 years in prison for each), as well as conspiracy to hack into a computer (up to 5 years in prison). The charges relate to the publication of classified documents of American intelligence and military forces. These papers dealt with the fighting in Afghanistan and Iraq, including the killings of civilians and the torture of prisoners by the US military. In addition, extensive diplomatic correspondence was in the public domain.

If you believe the documents of WikiLeaks, a significant part of the dead civilians were killed by the US military (in particular, there are new references to cases of shooting civilians from helicopters). At the same time, it was not known about 15 thousand dead before the publication of new documents by WikiLeaks. And according to the materials of the "Afghan dossier", the number of civilian casualties during the six years of the war in Afghanistan amounted to 20 thousand people, that is, three times less than in Iraq.

Judging by recent news, English justice, namely the Central Criminal Court of England and Wales, refused to extradite WikiLeaks founder Julian Assange to the US authorities. According to Judge Vanessa Baraitzer, US law enforcement agencies did not provide sufficient convincing guarantees that Assange would not be able to commit suicide after extradition.

In response, the American side will appeal against the court's decision to refuse to extradite the founder of Wikileaks to the United States. At the same time, Washington said that if Assange is transferred to the United States, he will not be sentenced to death, but he will be guaranteed a 175-year term.

Assange's supporters, gathered around the courthouse, greeted the news of the refusal of extradition with applause. At the same time, Reporters Without Borders continues to insist that the online journalist is being persecuted for his professional activities, and demands that the authorities recognize this.

We have cited two cases from the life of bloggers in Russia and in the West. What they have in common, and what are the differences, is up to you, dear reader, to judge. We will recall the well-known question in Russia since the "zero" years - "What is the strength, brother?"
Reporterin Yandex News
Reporterin Yandex Zen
17 comments
Information
Dear reader, to leave comments on the publication, you must sign in.