Search for compromising evidence and photo documents: what did the Americans storming the Capitol do 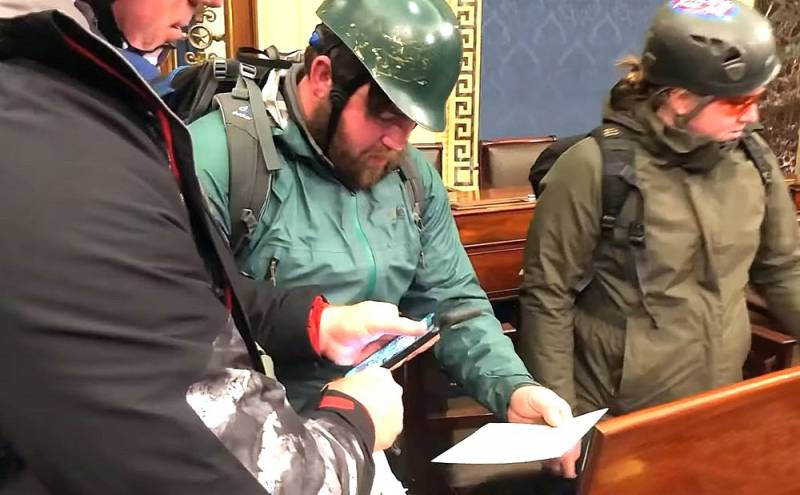 On Wednesday, January 6, crowds of protesters, disagreeing with Donald Trump's loss in the presidential campaign, broke into the building of the American Congress in Washington and occupied the building for several hours. A video on the Youtube channel of The New Yorker tells about what is happening in the Capitol on this fateful day.


With shouts of curses addressed to the police, the protesters, overcoming the resistance of the guards and barriers, entered the Capitol building. Inside the building, the police no longer resisted the protesters who shouted pro-Trump slogans and began to walk up the stairs and offices of the building - they only warned them against manifestations of excessive violence. Walkers along the corridors called for respect for the country's constitution, which protects the freedom of citizens, and shouted about the greatness and rebirth of America.


Then the "dissenters" entered the Senate meeting room. Voices were heard in favor of creating "their own government", but others noted the illegality of such actions, stressing that the main chair of the cabinet belongs to the vice president.

They stole the elections from us, and we cannot sit in their chairs?
- indignantly said one of the guys in the hall.

But one of the demonstrators warned against violent actions and called on to look for the necessary information. Many began to photograph the documents in the meeting room. In particular, they found the documented objection of the Republican from the state of Texas Ted Cruz to the election results in Arizona (according to which Joe Biden was named the winner in the state).

Let's find everything that can be used against these thugs
- called one of the guys photographing the papers.

The color of what is happening was added by a half-dressed man in a horned headdress, snarling and waving the American flag, expressing a noticeable sympathy for everything that was happening - he later asked him to photograph sitting in the chair of the President of the Senate.

One of the policemen calmly urged people to leave the courtroom, to which he was told that there were four million supporters waiting outside the building. Then several people in the office began shouting prayers to the Almighty over the loudspeaker for being able to defend their rights, express their will and send a "message" to all tyrants on Earth - communists and globalists that the spirit of America is alive and it is not subdued and about the "white light" that filled the Senate and the US patriots who love God.

After that, some of the Protestants left the building, but the storming of the Capitol did not end there - more and more "dissenters" rushed in, shots sounded and smoke billowed. Outside, meanwhile, the equipment of the "pro-democratic" mass media was smashed and called to create a list of those who needed revenge and for whom it was worth "declaring the hunt."

Traitors to the guillotine!
- shouted one of the crowd, after which there were calls to mobilize the forces of cities and counties to fight political opponents.
Ctrl Enter
Noticed oshЫbku Highlight text and press. Ctrl + Enter
We are
The storming of the Capitol by the demonstrators called the success of Russia
Revenge for Soleimani: the United States promised to send a plane to the Capitol
Reporterin Yandex News
Read Reporterin Google News
Ad
We are open to cooperation with authors in the news and analytical departments. A prerequisite is the ability to quickly analyze the text and check the facts, to write concisely and interestingly on political and economic topics. We offer flexible working hours and regular payments. Please send your responses with examples of work to [email protected]
Information
Dear reader, to leave comments on the publication, you must sign in.