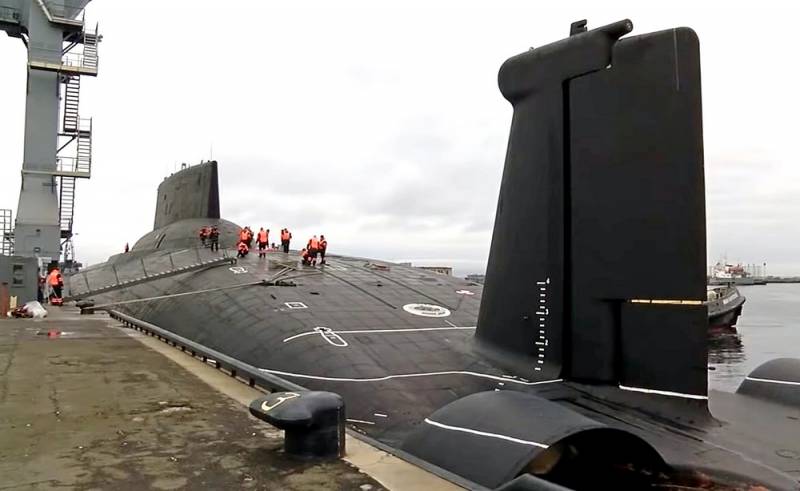 In five years, our last strategic submarine missile cruiser Dmitry Donskoy of Project 941 (Shark) is to be decommissioned and scrapped. However, among the expert community, the idea of ​​modernizing an elderly nuclear submarine and extending its life as a carrier of cruise missiles is quite popular. Is it really worth getting involved with such a "renovation", let's try to figure it out.


Project 941 "Akula" has no analogues, these are the world's largest "nine-story" submarines, the exceptional dimensions of which were determined by the impressive dimensions of the R-39 (RSM-52) ICBMs. Initially, it was planned to build 12 nuclear submarines of this series, then their number was reduced to 10, in the end it turned out only 6. To date, 3 "Sharks" have already been dismantled with active financial "assistance" from the United States and Canada. Arkhangelsk and Severstal are in the queue for disposal, their missile silo covers have been cut down at the request of the same Americans. Only "Dmitry Donskoy" with the tactical number TK-208 remains in the ranks, and it is around his fate that spears break for several years.

Since the R-39 intercontinental ballistic missiles, the carrier of which the "Sharks" were developed, were discontinued and liquidated, the last nuclear submarine of this series in 2002 was converted into an experimental submarine. It was on it that the Bulava ICBM, created for the promising projects 955 and 955A, was originally tested. Today the Boreis are being actively built, and the Bulava has been put into service. Now the question is about the future fate of "Dmitry Donskoy", which is the oldest in the series of Soviet submarines. Since its maintenance costs the budget 300 million rubles a year, it is proposed to be sent to open-hearth after its brothers. But there is also an option with "renovation".

What exactly do they propose to do with the "Shark"?

High-ranking Russian military officials point out that due to the submarine's exceptional size, it can be converted into a carrier of cruise missiles "Caliber", "Onyx" and hypersonic "Zircons", which can be combined with up to 200 units. Say, in this way we will create in the oceans a great latent threat to the American fleet and the United States itself. Indeed, there are successful examples of the modernization of old Soviet ships, for example, the Admiral Nakhimov TARK of the Orlan project. The unparalleled powerful nuclear cruiser is now literally stuffed to capacity with modern weapons and equipment, and other surface ships are being modernized at the same time. The idea to renew and give a second life to "Dmitry Donskoy" has a right to exist, but there are important nuances.

At first, as part of a deep modernization at the old nuclear submarine, it is necessary to replace the old reactor and install modern equipment, which in itself is not a cheap pleasure. Detractors from The National Interest note that the outer steel shell and the inner titanium hulls of the submarine will also have to be replaced. In general, it turns out a kind of "porridge from an ax", in fact, you need to reassemble a giant submarine. Moreover, even an artificially extended service life will be inferior to new nuclear submarines.

Secondlydespite the "renovation", structurally "Dmitry Donskoy" will remain an outdated submarine with two propellers, which makes it quite noisy. In fact, this means that it is not a real threat to the US Navy, since it can be relatively easy to detect. And its destruction in the event of a real war will lead to the loss of 200 cruise missiles at once. It will be possible to actually use the "Shark" only against opponents of a lower order, some "barmaley" in the desert, demonstratively striking their sheds and "carts" with expensive "Calibers".

ThirdlyAs military experts rightly point out, at the cost of modernizing one Dmitry Donskoy, two brand new Boreas can be built at once. It is not entirely correct to draw a direct analogy with the surface fleet here, since we really did cry for the DMZ ships, and it is justified to modernize old cruisers and frigates, but with submarines everything is more or less good.

Finally, the funds that will require the "renovation" of the old nuclear submarine can be used to develop a multipurpose series of low-noise fifth-generation submarines "Husky", which will submitted and in the form of SSBN, and in the form of SSGN, where you can cram to failure "Caliber" and "Zircon". "Shark", of course, it is a pity, it is a symbol of the departed militarytechnical the power of the USSR, but today it really looks like an atavism. In conditions of budget deficit, funds should be spent rationally.
Reporterin Yandex News
Reporterin Yandex Zen
53 comments
Information
Dear reader, to leave comments on the publication, you must sign in.