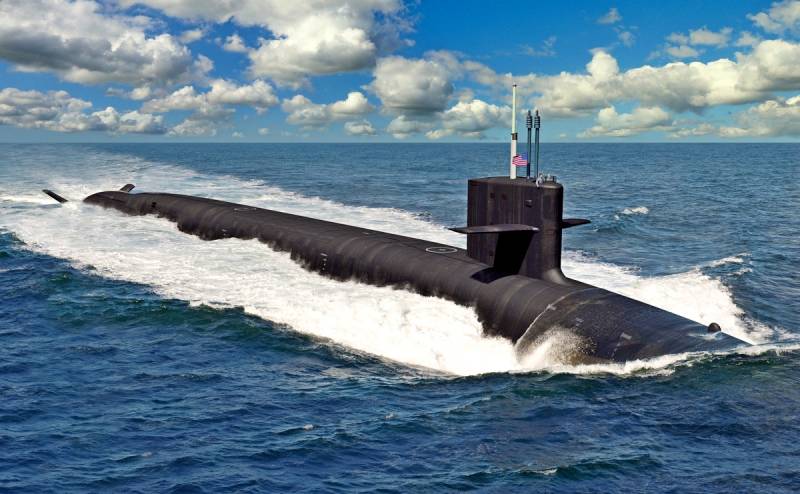 The nuclear submarine fleet is the most important component of the Russian "nuclear triad". Formally, today there is a parity between the United States and the Russian Federation in the number of strategic missile carriers, 14 nuclear submarines each, but the Pentagon intends to gain an advantage by commissioning the next generation Columbia class submarines. Will our modernized Boreis be able to compete with them on an equal footing, and when can we expect the Husky?


The strategic offensive nuclear forces of the US Navy are represented by 14 submarines of the Ohio class (SSBN / SSGN), 4 more submarines belong to the SSGN. They are all unified, which is a significant advantage. On board each SSBN "Ohio" is on 24 ICBM "Trident II" with MIRVs, which have individual guidance. The range of the American missile is 11300 km, the weight of the warhead is 2800 kg. Submarines of this type are constantly on alert, being in the ocean for more than half the time.

The Russian submarine fleet opposing them is full of variety. These are the submarines of the Kalmar project, which are between the 2nd and 3rd generations, and the Dolphin with the Akula, which belong to the third, and the strong fourth generation, represented by the Borey and Borey-A projects. It is expected that by 2027 the Ministry of Defense will have 10 "Boreis", the rest will be in service "Dolphins". Our main stake is on the upgraded Borey-A project 955A, and for good reason.

The new Russian submarine is automated as much as possible, so the crew has been reduced to 107 people. It produces even less noise, since the propeller is not used as a propeller, but a water cannon, while the outer shell of the hull has a noise reduction effect. The newest hydroacoustic complex (SAC) "Irtysh-Amphora-B-055" makes it possible to more effectively classify targets, detect enemy torpedoes, and find holes in the ice. The Borey-A nuclear submarine lacks the characteristic "hump" where the launchers were previously located.

Technology dry start at launch allows for a missile strike without prior unmasking. Each submarine carries 16 Bulava ICBMs. The range of its flight is slightly inferior to the American one, amounting to only 9300 km, the weight of the warhead is 1150 kg. "Ohio" surpasses the Russian fourth generation nuclear submarine in the number of missiles on board, but our "Bulava" is capable of overcoming missile defense with greater efficiency due to flight at low altitude surrounded by 40 false targets. Currently, the Russian Navy has 4 "Borey", one more, "Knyaz Oleg", is in the final stage before delivery. Also, 4 nuclear submarines of project 955A "Borey-A" have already been laid down and are being built at the shipyards. A total of 10 are planned.

Unfortunately, the potential adversary does not sleep. The Pentagon is ready to invest $ 128 billion in the construction of its fourth generation Columbia class submarine. There should be 12 of them, that is, each will cost the American taxpayers in the amount of about 10 billion, and the flagship - in all 14. For comparison, one Ohio SSBN cost $ 3 billion. What exactly is the US willing to pay so much money for?

The Columbia is roughly the size of its predecessor, and there will be even less missiles - only 16. But it will be the most high-precision and super-powerful ICBMs Trident II in the D5 version. The nuclear power plant can serve up to 42 years without a single refueling of the reactor, which will be powered by an all-electric motor. This will make the newest nuclear submarine one of the quietest in the world. Due to the maximum automation, the number of crew members will also be reduced to 157 people. This year, construction of the lead submarine in the series will begin, and it should be completed by 2042.

This will be a very serious challenge for the RF Ministry of Defense. As a response, the project of the nuclear submarine of the fifth generation "Husky" is being considered. There is no complete information about it, but it is known that the most advanced technologies and composite materials will be involved in it. This was directly stated by the Commander-in-Chief of the Russian Navy, Admiral Nikolai Evmenov:

It is no secret that work is underway to create 5th generation nuclear submarines. They will be even more perfect in all their characteristics.
The dimensions of the double-hull submarine will be quite modest, and the crew will be reduced to 90 people. Installation of a new, more advanced power plant is possible. The nuclear submarine can be produced in two versions at once: as an SSBN and as a SSGN. In the first case, the ICBMs on board will be equipped with hypersonic maneuvering units designed to penetrate the most modern missile defense system. In the second case, "Husky" can be equipped with anti-ship "Caliber" and "Zircon" to fight the enemy's AUG and strategic American missile carriers "Komumbia", as well as with the British "Vanguard".

Let's hope that this Russian project will take place and appear in the oceans in time to deter the Pentagon from being too aggressive.
Reporterin Yandex News
Reporterin Yandex Zen
8 comments
Information
Dear reader, to leave comments on the publication, you must sign in.