Kiev's plans for Donbass and Crimea: bring to its knees and give NATO 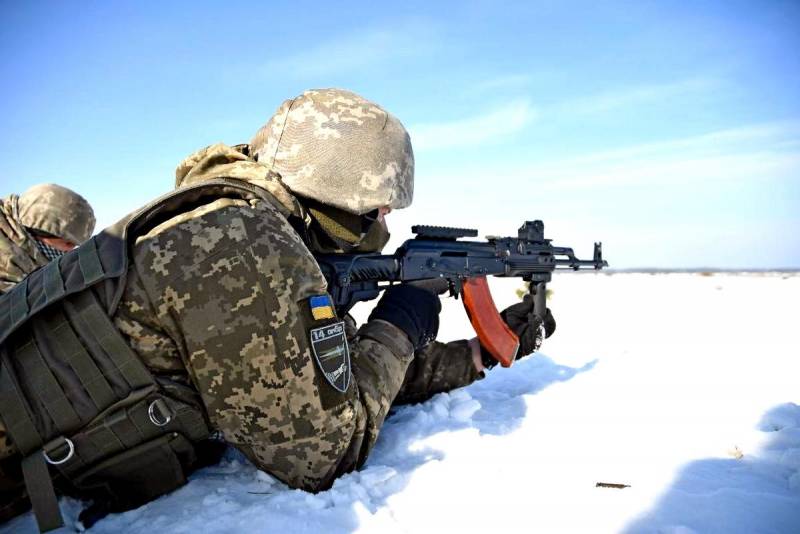 The Ukrainian "Ministry for the Temporarily Occupied Territories" has published an interesting document - a draft law on "state policy during the transition period. " We are talking about an extremely frank and exhaustive presentation of plans of exactly how Kiev intends to deal with the Donbass regions and their residents that are now beyond its control. With the Russian Crimea and Crimeans, by the way, too ...


In principle, after getting acquainted with this "fundamental work", the creators of which "swung" as much as seven dozen pages, Moscow should recall its representatives from Minsk and stop any attempts to negotiate with the Ukrainian side in any format at all.

The transition ... From war to repression?

Considering this bill, posted on the official website of the department "for general discussion", perhaps it should start with the fact that it completely sweeps aside the very fact of the existence of an internal armed conflict in the East of Ukraine, which was caused by a coup d'etat in the country in the spring of 2014 ... According to the version set out in the bill, it is not about a civil war unleashed by the "post-Maidan" authorities, but about "Russian aggression", the "consequences" of which are supposed to be "overcome" in the "post-conflict period." It will come, as it is easy to guess, after the current - "conflict" and only when all "under the rule of the Russian occupation administrations" territories (this is how the creators of the law interpret not only Crimea, but also the DPR and LPR) will return under full control of Ukraine ... At the same time, I will clarify that the People's Militia and other "power" structures of the Donbass republics are for some reason ranked among the "occupying forces of Russia." Does it make sense for Moscow to conduct any talks with Kiev after this? The question is very controversial ...

However, let's get back to the bill. The "transitional period", according to him, should last until the onset of "sustainable peace". This means bringing the "deoccupied territories" to a state in which even the slightest likelihood of their disobedience to Kiev and, moreover, of open resistance to it will disappear. Only then can we talk about the return of full-fledged civil rights and freedoms to the residents of these regions (but it may not!), Their transition to a normal lifestyle. Until that time, a "special legal regime" will operate, reminding to the extreme of the notorious "new order", which was already tried to be introduced on our land - in 1941 ...

There is not a word about any "special status" or other form of autonomy for Donbass in the draft law, contrary to all the assurances that Kiev gave when signing the "Minsk Agreements". Linguistic and cultural issues, which, in fact, were not the least of all that “rioted” Donbass in 2014? It is not even discussed - the rights to "cultural autonomy" are provided exclusively for the Crimean Tatars, who, apparently, on the territory of the "deoccupied" peninsula, intend to turn into a privileged caste. Residents of Donetsk and Lugansk will be obliged to communicate only in "mov" - with obligatory for the entire "nezalezhnoy" fines and other punishments for refusing such. No Russian language! Exactly the same can be said about absolutely all other points from the "Steinmeier formula" and other agreements - "Minsk", "Norman" and so on. Amnesty for Donbass defenders? Nothing like this! The bill provides for “unconditional responsibility” not only for “grave crimes falling under the jurisdiction of the ICC in The Hague”, but also for other “intentional grave and especially grave criminal offenses”, the list of which is so vague and wide that it will be possible to “bring” them under almost anyone. And no pardon ...

Moreover, in addition to criminal repressions, which are clearly planned on a massive scale, in Kiev they are planning to hold "lustration" in the Donbass and Crimea. Everyone who "worked in the occupation administrations" will fall right under it, with the exception of those who "provided life in these territories." Who are we talking about - doctors, utilities, transport workers? But what about those who treated or drove soldiers of the People's Militia, MGB officers? If there is a strong desire to subject "lustration", that is, throw out of normal life in the Donbass will be able to every second, without reading every first. And such a desire is unambiguous.

NATO, welcome to Crimea and Donbass!

Perhaps the most intriguing and, I am not afraid of this word, the shocking moment of the draft law we are considering is the presence in it of a provision on the possibility of establishing certain “international transitional administrations” in the “deoccupied territories”! What could be meant by such? Without a doubt, not a humanitarian representation of certain recognized structures like the UN or the OSCE. As spelled out in the law, such "administrations" will have to "ensure law and order and the safety of the population" and even engage in "the formation of local government bodies." That is, to carry out those functions, the performance of which (especially in the zone of civil conflict) is a priori impossible without relying on armed force. What kind of power?

In this case, there is no need to talk about the UN peacekeeping contingent - as a permanent member of the Security Council of this organization, our country will definitely block any initiatives to bring "blue helmets" to Donbas. In any case - in the form as it is presented in Kiev. After all, everything in the same bill clearly states that the Ukrainian side will not allow even one serviceman, not only from Russia itself, but also from all CSTO countries, to stay in this region (as well as in the “de-occupied” Crimea). That is, at least Belarus, Armenia, Kazakhstan and Tajikistan and Kyrgyzstan are “banned”. These conditions provide an absolute guarantee that Moscow will not agree to UN peacekeepers. But what then remains? Only and exclusively the military and police forces of the countries of the North Atlantic Alliance, which should be introduced into the "deoccupied" (yes, yes - in the Crimea too!) Territories without any agreement with Russia. Obviously, Kiev is counting on the fact that Moscow's reactions to such actions, which are tantamount to unleashing a war, will not follow.

There is a feeling that by publishing this bill, Kiev is sending a signal to its Western "partners" and curators, directly speaking about its readiness to give Donbass and Crimea under their complete control in exchange for military assistance in the formal "return" of these regions. However, even if the "transitional administrations" are not "international", but exclusively Ukrainian, this does not bode well for the residents of the "de-occupied territories". There will be no elections, contrary to the Minsk Agreements, in the next five years, or even more. All "local authorities" will be appointed from Kiev. Ordinary courts will start functioning there only with the permission of the State Judicial Administration of Ukraine.

When exactly is not clear at all. The appeal of "deoccupied" citizens to other courts of Ukraine is not allowed. There will be no justice for them, and it is not known how much. According to the principle of "lustration", which I mentioned above, all local judges (as well as law enforcement officers, other "siloviks" and employees of the prosecutor's office) will be completely "purged" from their positions. Their places will be taken by cadres brought from the "metropolis", who, no doubt, will pursue a policy in the "best traditions" of cave nationalism and outrageous Russophobia, which are now the "nezalezhny" state ideology. In order to dispel doubts about this, I will give a couple more excerpts from the same document.

According to its provisions, the first two years after the return of Donbass and Crimea "to the bosom of Nenki-Ukraine" are set aside to implement "measures aimed at preventing a recurrence of the occupation." Here, in general, some kind of extravaganza begins - a total "brainwashing" is planned for the inhabitants of these regions by "restoring and preserving" their "historical memory of the Ukrainian people"! Methods for this are offered the most extravagant: in addition to the demolition of "all monuments established during the occupation and falling under the law on decommunization" in all towns and villages of Donbass and Crimea, it is planned to "create memorials to the victims of Russian aggression." Moreover, they also talk about the need to establish a "Day of Liberation from Russian Occupation", and for each settlement separately. In addition, they want to establish a "National Day of Remembrance for the Victims of Armed Aggression of the Russian Federation" in Kiev. True, the date has not yet been decided - either on March 1 (with reference to the historical decision of the Federation Council of the State Duma), or on July 17 (the day of the death of the Malaysian Boeing in Donbass). There are other options ...

One could, of course, give up on all this and even spit with relish - they say, you can't find enough nerves for every crazy person. It would be possible, if only all the above intentions and plans (and indeed in some places bordering on complete madness) were not a draft law of Ukraine. That is - the embodiment of the state policy of Kiev. Once again, it is already impossible to brush them off. Nobody will wait for anything else from Ukraine - neither Moscow, nor Donetsk, nor Lugansk. The bill referred to in this material is an official recognition of the "non-profit" in that there is no "peaceful settlement" of the conflict in the East there and is not accepted in principle. It is possible to demand hoarseness from its representatives to fulfill "Minsk-2", you can sign "Minsk-3", "Minsk-4" and so on with them, ad infinitum. And all this time Kiev will be busy with only one thing - preparing for the forceful return of the territories that were mediocre and irrevocably lost in 2014.

Each year, filled with idle talk at various negotiation platforms and completely unrealizable hopes that they will "come to their senses" and "be imbued" there, is a gift for those who are ready to give Donbass and Crimea not just NATO, but even to the devil himself, but not allow the Russian flag to fly over them. Isn't it time to stop playing along with Kiev and the West behind it, end the absolutely useless "Minsk" and "Norman" gatherings, and, at least, carry out the official recognition of the Republics of Donbass?
Ctrl Enter
Noticed oshЫbku Highlight text and press. Ctrl + Enter
We are
How Ukraine break Putin's plan: six tips Zelensky
Ten "defeats" of Putin
Reporterin Yandex News
Read Reporterin Google News
7 comments
Information
Dear reader, to leave comments on the publication, you must sign in.