Why are Bulgarians offended by the Russians?

30 2018 June
88
"Brothers" - the Bulgarians - one of the few Orthodox Slavic peoples of the Balkans. It is clear that the Bulgarians have a very long and close relationship with the Russians. If it were not for Russia, it is possible that political Bulgaria would not have won independence at all, or would have gained much later. So Bulgaria itself in its current form is the result of Russia's victories in the Russian-Turkish wars. Many Russian soldiers were killed on Bulgarian land in the name of liberating it from Ottoman rule. 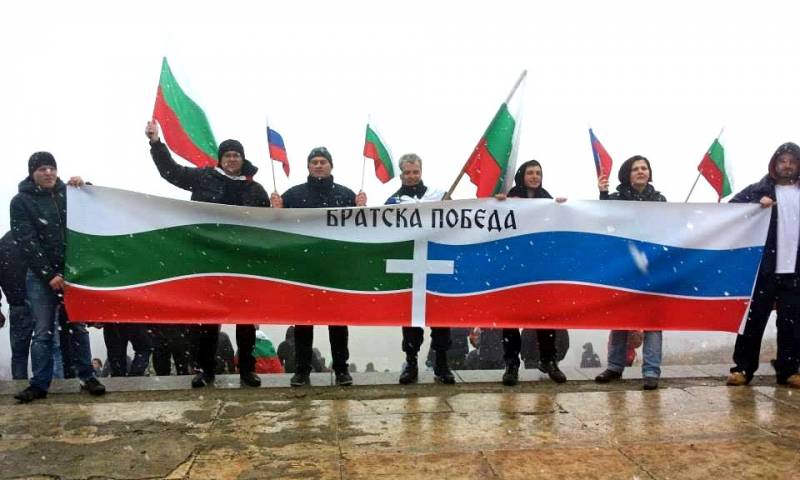 It would seem that Bulgaria should for centuries become a faithful and reliable ally of Russia. But already thirty years after the liberation, during the First World War, Bulgaria was on the side of Germany and that of the Ottoman Empire. Sofia also had allied relations with Hitler, although the Bulgarian Tsar did not declare war on the USSR and did not send Bulgarian soldiers to the front. Many Bulgarians prefer to remain silent about these pages of history, while others begin to recall historical insults to Russia.

At the beginning of the twentieth century, the situation on the Balkan Peninsula escalated. The Bulgarian principality, which formally remained dependent on the Ottoman Empire, declared complete sovereignty in 1908. Then the Balkan Union was created, which included Greece, Bulgaria, Serbia, Montenegro. In 1912, a war broke out with the Ottoman Empire, in which the Balkan countries emerged victorious. The Bulgarian forces almost reached Constantinople itself, but Russia intervened, which was afraid that if the Bulgarians captured Constantinople, the usual balance of power in the region would seriously change, and the Western powers would come after the Bulgarians. Therefore, Russia did not allow a fatal blow to the Ottomans. Bulgarian nationalists are still dissatisfied with the events of those years.

Another “black line” in Russian-Bulgarian relations is jealousy of Serbia. Russia has always preferred Belgrade as an unambiguous and reliable ally. Meanwhile, Bulgaria often clashed with neighboring Serbia, including over Macedonia, which the Bulgarians consider their territory. Russia has always been on the side of Serbia. Ultimately, after World War II, Bulgaria ceded the Macedonian lands of Yugoslavia, in which the Macedonians were recognized as a separate people. After the break-up of the Socialist Federal Republic of Yugoslavia, Macedonia became an independent state, which Bulgarian nationalists also dislike.

But the biggest claim of the Bulgarians to our country is connected with the post-war period of Bulgarian history. In the 1920s - 1940s, a strong communist movement was operating in Bulgaria, which was subjected to repression of the tsarist government. At the same time, the country began to focus on an alliance with Nazi Germany. Although Bulgaria did not enter the war against the Soviet Union, this did not save her from entering the victorious Red Army in the country in 1944. By this time, the Bulgarian leadership had already abandoned the alliance with the Nazis, but the Red Army still took control of the territory of Bulgaria. Soon, the pro-Soviet communist government came to power in Sofia.

The “Sovietization” of Bulgaria still causes mixed opinions among the Bulgarians themselves. Many Bulgarians welcomed the liberation from tsarism and believed that the country had achieved great success under the Communists, others were outraged that Bulgaria had become almost the “sixteenth republic” of the Soviet Union. Now the Bulgarian leadership, like the authorities of many other countries of Eastern Europe, speaks of the Soviet occupation and adheres to the pro-Western line. It is clear that this point of view is broadcast to the masses and at least half of the Bulgarians, especially the younger generation, now share it.
Ctrl Enter
Noticed oshЫbku Highlight text and press. Ctrl + Enter
We are
Where is Russia going?
Scolding everyone for demolishing monuments, Russia should look at itself
Reporterin Yandex News
Read Reporterin Google News
Ad
The publication is looking for authors in the news and analytical departments. Requirements for applicants: literacy, responsibility, efficiency, inexhaustible creative energy, experience in copywriting or journalism, the ability to quickly analyze text and check facts, write concisely and interestingly on political and economic topics. The work is paid. Contact: [email protected]
88 comments
Information
Dear reader, to leave comments on the publication, you must sign in.