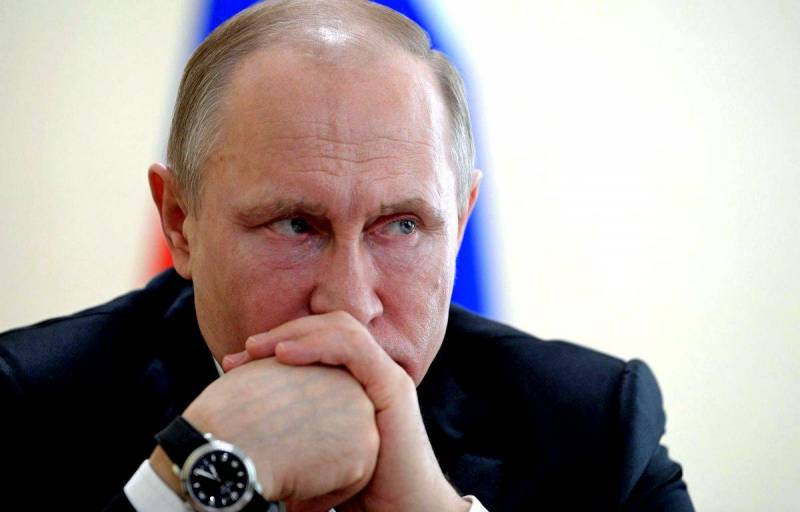 Looking behind the fabulous rebirth of the Russian Federation under Putin, a rebirth truly from the ashes into which the clique of Yeltsin's young reformers and the gravedigger of socialism Gorbachev, who preceded them, drove it, you begin to believe that God does exist and holds his guardian hand over Russia. And it was he who sent her Putin, as a savior from the inevitable collapse and plunder.

The results of Putin's work over 20 years. Briefly

No matter how pathetic it may sound, at the turn of the century Russia actually stood with one foot in the grave. After two Chechen wars, the vultures have not just circled over her. Yes, in fact, they circled, such normal vultures with NATO stars and waited only for an hour when it itself begins to fall apart, in order to pull it apart in its corners, following the example of Yugoslavia that was torn apart by them. And then a truly miracle happened. At the head of Russia appeared a hitherto unknown person of no grenadier growth without a loud voice and general's stripes. And even the West believed that no trouble should be expected from it.

And everything seemed to be going well, according to Washington's plan. But how what happened in 2007 in Munich could have happened is still racking their brains in the West. How Putin managed to dull and lull the vigilance of the collective West is a riddle of riddles, which is probably hidden in the KGB past of the GDP. Where the West was looking, I do not know. But when in 2007 at the Munich Security Conference suddenly jumped (I'm talking about the famous speech of GDP), the West woke up from a lethargic sleep, but it was too late. At that very moment, the world reeled and began to slip out from under their feet. Russia demanded satisfaction and a revision of the rules of the game. Only the head of a great country could afford such impudence, and only feeling the right of the strong.

George W. Bush, who had taken patronage over Putin, clearly sympathizing with him before, hastily handed over the affairs to Obama and retired, never completely believing in the reality of what was happening. You remember what the strongly tanned gentleman, the leader of the pale-faced Comanches, did during his 8 years of reign. He ripped the economy RF to shreds ”, with which he retired on an honorary pension, where he began to write memoirs under the general title“ I and the Genius of Atrocity Putin ”, leaving his heir to ashes instead of diplomatic relations between our countries. To say that Trump, who came to replace him, had an easier time, is also impossible. After the next Address of the GDP to the Federal Assembly in March 2018, the Obama Calibers seemed to him already child's play, when Daggers, Sarmatians, Poseidons, Petrels, Vanguards and Peresvet were added to them. But this was not enough for the restless Putin, and in February 2019 he presented the demoniac cowboy with Zircon, after which the life of the hegemon finally faded and lost all meaning. And I am not exaggerating here at all and not joking, because after the words of VVP “we, as victims of aggression, will go to heaven, and you will simply die,” everyone was no longer joking. The last hope remained that it would not be able to last so long, and in 2024 this whole nightmare would finally end. Because it won't be worse than Putin, and you can try to come to an agreement with someone else, in the hope that the bomb will not hit the same crater twice.

And in logic here, of course, you cannot deny them, if you remember who replaced Stalin in 1953. Stalin, who took over the country with a plow, and passed it 30 years later with an atomic bomb. Although Nikita Sergeevich, too, was not a gift for them, with him Gagarin flew into space, and the Caribbean crisis happened, but the scale of the personality was not the same! Putin's task is not to give them such joy and to carry out the transit of power in 2024 into reliable and trusted hands. And believe me, work in this direction is underway. And you already know these people, it is not yet time to stop at any one of them (the selection is stricter there than in the cosmonaut corps), but when Putin makes a final decision for himself, you will see this person in the post he now holds Mishustin. Now, in the lower echelon of power, those who made it to the short list are being tested, according to the results of their activities, the final decision will be made. I hope that when choosing the final candidate, VVP will take into account all the pitfalls of this profession, which it knows like no other.

But this is a prospect for 2024, and we are now considering 2021. In this context, I would like to draw the attention of the distinguished assembly to a certain sequence of actions of our president. There is definitely a certain cyclical nature. In 2007, he tore apart the calm of the West with his Munich speech. Exactly 7 years later, Crimea happened. I don't want to hint at anything, but the next 7-year cycle ends precisely in 2021. I look forward to great events. While on the inner track, Putin as a collector of Russian lands.

As you can see, even on the internal track, where everything depends on us, we are experiencing cyclopean difficulties, as for the external track, where Russia alone confronts the collective West, we have been doing rubbish there lately. Giving advice is a hopeless thing, and even more so giving advice to the head of state, but, nevertheless, I will still try to do it. We have to proceed from the fact that our "sworn friends" will not leave us alone and will continue to try to squeeze the "anaconda ring" around the Russian Federation, so there are few options for opposing this. Or rather, only two. Either we will continue to resignedly and weakly tolerate all this, or we will finally go over to the offensive on all fronts, professing the Suvorov principle: "The best form of defense is an offensive!"

I sometimes think that it would be good for us if those who want to impose sanctions impose all the sanctions that can be introduced, and as quickly as possible. This would free our hands to protect our national interests by such means as we consider most effective for us.
Believe me, gentlemen, globalists-hegemonists, you will definitely not find it enough! Include your sanctions already. We are looking forward to them!

In order not to depend on sanctions, we need to create a self-sufficient, self-contained internal market. We have everything for this - and inexhaustible natural resources (almost complete periodic table), and our own monetary unit, provided by gold reserves, and unique Technology, and qualified personnel. The only missing link is the population size in the habitat. For the area to be self-sufficient, at least 300-330 million people inhabiting it are needed. Currently, 145 million live in the Russian Federation. Where can I get the same amount? Russia is doomed to the revival of the Union in any capacity. Even the Commonwealth of States, even the Union State. And Putin will move in this direction. And this is not imperial ambitions, but a condition for the survival of the state (the Americans knew what they were doing when they were crushing the USSR).

With all the post-Soviet countries, members and not members of the CSTO, it is necessary to end the game of spillikins, having precisely designated the edges - either you are with us or against us, with all the ensuing visa and economic consequences. The first presupposes the obligatory conduct of joint exercises, the purchase of weapons, as well as joint participation in military operations abroad, similar to NATO. All ideas about the disinterested friendship of peoples must already be left to the history textbooks of the USSR period, in the world of unprincipled cash, where we all came, somewhat different principles govern. If you agree with this state of affairs - you are welcome to us, no - there is a way out! With the Republic of Belarus and its intractable dad, it is also time to end this protracted mess with the creation of the Union State, I think this year is unlikely, and in 2022 this problem will most likely be solved with the creation of the United Armed Forces. By the way, the latter also presupposes the appearance of a new position - the head of the Union State, and I even know a person who can take it in 2024 (you thought right!).

And let the world press scream and accuse us of being aggressive policy and military expansion, after all, they do it anyway. So let them at least have grounds for this. Tell me nonsense? It's okay, let them get used to it! Actually, we are not inventing anything new, we are just copying the style and methods of work of our respected Western "partners", which they have sinned all the time after the collapse of the USSR. So, gentlemen, imperialists, I must grieve you - the Union is returning, so far only in the person of the Russian Federation, but very soon, I foresee, the number of our allies will multiply. And on an absolutely voluntary basis. In this world, where only strength is respected and everything is allowed to the strong, apparently, they do not understand otherwise. You had a historic chance to build an equal world without wars and violence, when in 1991 we voluntarily renounced our superpower status, destroying our country to please you and halving the Armed Forces. How you took advantage of this, we can already see. They began to surround us with their military bases, making our former friends (the Warsaw Pact countries) our enemies. We humbly endured it. But when you began to climb under the covers to us, on the territory of the former USSR, our patience ran out. Enough! Get over it and wake up! I officially inform you that from this moment the rules of the game are changing. And now we establish these rules by the right of the strong! For too long we have been afraid to raise our voices. Enough! Everything has a limit. As you know, there is no reception against scrap. The time when you created problems for us is over, now try to solve the problems that we will create for you, maybe there will be no time and desire to create problems for others.

The best way of defense is an attack! There is enough time to solve these problems before the end of the powers of the GDP, and today's abilities of the Russian Federation are even abundant. And if, being at the helm until 2024, the President of Russia will take at least some of the measures I have proposed to ensure the security of the Russian Federation, then I have no doubt that the transit of power in the country will pass without any problems, giving the future successor of the GDP an opportunity to navigate and continue on the path in the direction already laid by him. To our delight, in spite of the enemies.
Ctrl Enter
Noticed oshЫbku Highlight text and press. Ctrl + Enter
We are
Putin's departure: how to prevent the collapse of Russia's foreign policy
Putin's phenomenon is Russia's main problem
Reporterin Yandex News
Read Reporterin Google News
56 comments
Information
Dear reader, to leave comments on the publication, you must sign in.