War for Nagorno-Karabakh - to Be Continued? 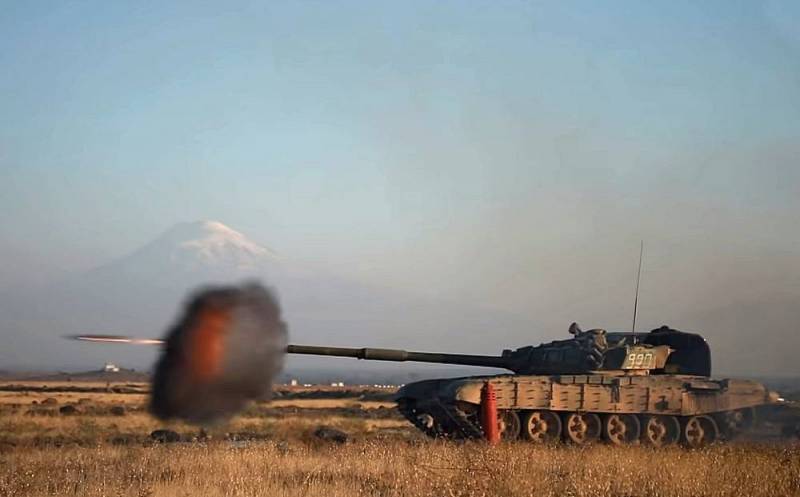 Today, on January 11, a meeting is to be held in Moscow, which has every chance of obtaining the status of fateful later. Azerbaijani President Ilham Aliyev and Armenian Prime Minister Nikol Pashinyan will again be at the negotiating table. Our domestic leader Vladimir Putin will act as a hospitable host, arbiter and mediator between these irreconcilable opponents, two months ago who already managed to force his counterparts to move from military operations to peaceful dialogue.


Will this summit become a point in the conflict between Baku and Yerevan, or at least in their dispute over Nagorno-Karabakh? It would be naive to pin such far-reaching hopes on him. The events of the short time that have passed since the ceasefire, the rhetoric and actions of the heads of both states are too eloquent evidence of the opposite. Rather, we can only talk about extending the pause in the war, the continuation of which, alas, is inevitable.

The second part of this long-established classic formula is known to everyone. To our great regret, judging by the multitude of statements emanating from both Azerbaijani and Armenian officials and representatives of state institutions, it is on it that they intend to act in both countries. For example, at the end of last year, the head of the Armenian Ministry of Foreign Affairs proclaimed "the de-occupation of the territories seized by Azerbaijan and the establishment of the status of Artsakh based on the right of its people to self-determination" as the "main priority" of not only the department headed by him, but the Armenian government as such. The head of the Armenian Foreign Ministry Ara Ayvazyan made such an ambiguous statement during a meeting with representatives of the OSCE Minsk Group on the settlement of the Nagorno-Karabakh conflict. At the same time, the chief diplomat of Yerevan stressed that he was going to “fight for the rights of the inhabitants of Artsakh” and return the territories lost as a result of the recent military conflict exclusively “within the framework of the peace process”, however, it is unlikely that he himself or any of his colleagues could clearly explain how something like this could happen in reality.

Is it any wonder after that that Ayvazyan's visit to the very territory that he is going to "de-occupy" (specifically, to Stepanakert) caused in Baku not just indignation, but a real storm of indignation. It got to the point that the Azerbaijani president personally, breaking into insults, threatened Yerevan "if this happens again" with the use of an "iron fist" and, in general, the consequences that they "will regret even more". The Armenian Foreign Ministry called all the claims of the Azerbaijani leader "groundless and empty." They say that the trips of their leader to Nagorno-Karabakh "do not in the least contradict the agreements of November 9". He wants - and will go.

Generally speaking, the tone of Baku balances on the verge of a defiant and frankly boorish and in communication with other parties in the process of resolving the Karabakh conflict. In particular, they have already managed to present claims against our peacekeepers, who, according to the Azerbaijani side, "go beyond their own mission" and "openly act in the interests of the Armenians." The representatives of Baku allow themselves to make such statements on the basis that, as they claim, Rustam Muradov, who heads the Russian military contingent, “takes an active part in events and meetings, during which he is photographed against the background of the flag of the separatist regime” ... The level of absurdity of the data “Accusations” are so high that it automatically takes them beyond the bounds of common sense and gives rise to fears that in this way they are only looking for a formal reason for the conflict. At the same time, Yerevan reproaches its opponents for things that are much more specific and serious.

Thus, according to the statement of the press secretary of the Armenian Foreign Ministry Anna Naghdalyan, a month after the conclusion of the peace agreement, the Azerbaijani army carried out an attack against the Armenian side in the area of ​​the settlements of Stary Tager and Khtsaberd of the Hadrut region of Karabakh, which led to casualties and the capture of prisoners. Generally speaking, in Yerevan they are extremely dissatisfied with the fulfillment by the Azerbaijanis of clause 8 of the Moscow agreements concerning the exchange of prisoners of war, hostages and other detainees. There are also questions regarding the actions of the servicemen of the Baku army in relation to the peaceful population of Karabakh. According to available information, these issues will certainly be discussed during the new Moscow meeting between Aliyev and Pashinyan. However, of course, not only them. There are many problems and it is difficult to say that they are moving towards their resolution.

However, no matter how many “acute moments” there are in the relations between Azerbaijan and Armenia, their settlement with the help of “Kremlin diplomacy” could be counted on with more or less confidence, if not for the invisible presence of another powerful and ambitious “ player ". In no case should we forget about the role of Ankara in everything that is happening, which again finds itself “beyond the threshold” of the negotiation process and will certainly try to express its “fe” on this matter as sharply and intelligibly as possible for all its participants. Turkey is inclined to regard Azerbaijan's victory in the battle for Karabakh as perhaps the most significant of its own military-political achievements in recent times and will hardly allow Moscow to further level it. For example, in Istanbul in the first days of this year, a symposium was held with a meaningful title: "The balance of forces in the South Caucasus and the Karabakh issue." At this event, the chairman of the Turkish parliament, Mustafa заявлениеentop, made a statement giving a comprehensive idea of ​​how much "dizziness with success" is in Ankara. According to the speaker, "the battles for Karabakh not only demonstrated the incredible effectiveness of the weapons and capabilities provided by Turkey," but also "make us talk about a potential revision of the entire concept of waging wars in the world"! Eka brought a Turkish citizen ... With such "twists" half a step remains until the declaration of his own country "the strongest in the world" and claims to world domination.

The Turks, in fact, possessed such things - and from the earliest times. However, for us another quote from Shentop's speech is much more interesting - the one in which he says that in the modern world "conflicts are not resolved, but only frozen, thus forming new points of confrontation." These words, most likely, contain the "key" to Ankara's vision of further prospects for the situation around Nagorno-Karabakh.

A number of experts today are seriously concerned about the possibility of Turkey using this conflict to create a new hotbed of instability in the entire Caucasian region. In particular, opinions are expressed that instead of returning Azerbaijanis who lived before, enclaves of persons completely controlled by Ankara will be created in the territories “liberated” from the Armenian population, capable of turning into terrorist cells at any second. For example, Turkmans or other representatives of various ethnic and religious groups displaced from Syria, whose services the Turkish side today more than actively resorts to in the context of regional conflicts that it is fanning.

In this regard, the recent statements of Azerbaijani President Ilham Aliyev about the firm intentions of Baku to build in Nagorno-Karabakh in the very near future ... an "international airport" acquire a completely different sound! Moreover, not one, but two - in the Lachin or Kelbajar regions, as well as in the city of Fizuli. At the same time, Aliyev himself admitted that the terrain he planned is "very difficult terrain", but, nevertheless, stressed that this project will be implemented in any case. According to the Azerbaijani leader, colossal investments in the construction of such expensive infrastructure facilities are necessary for the "development of tourism" - both international and domestic. However, such explanations cause, to put it mildly, bewilderment. What kind of tourism is Aliyev counting on in this region ?! Does Azerbaijan have nowhere else to spend huge money? It remains only to assume that in reality airports will be built with financial and technical support from Turkey. And their purpose will not be a tourist one ... On the other hand, if they want to turn Nagorno-Karabakh into a key point for the transfer of military force, then where are they planning to launch an offensive from its territory?

At the talks to be held today in Moscow, most likely, a very narrow range of issues will be considered, primarily of a humanitarian and economic nature. In any case, the official statement of the Kremlin press service is more than stingy and laconic: "It is planned to discuss the progress of the implementation of the agreements of November 9 and ways to resolve the problems that exist in the region." It also indicates that the initiator of the meeting is Vladimir Putin. Presumably, our president would hardly have invited Aliyev and Pashinyan to visit just for the sake of talking about unblocking regional road traffic and normalizing international traffic through the disputed region. Streamlining logistics from Armenia to Russia and Iran, and even the exchange of prisoners and carrying out search and rescue operations in Karabakh - this is all, of course, important, but somehow it does not pull at the level of Vladimir Vladimirovich personally. After all, there are heads of relevant departments.

No less interesting is the fact that literally on the eve of the meeting with Aliyev and Pashinyan, our leader had a confidential conversation with French President Emmanuel Macron, the main topic of which, according to official data, was the upcoming negotiations. Is this connected with the fact that now it is Macron who is the most consistent and tough opponent of Erdogan in Europe? Probably yes.

Ankara and Baku do not hide their intentions to continue the Nagorno-Karabakh conflict, while pursuing much larger-scale military-strategic goals than the capture of Stepanakert and the complete elimination of Artsakh. What did Erdogan and Aliyev’s talk about Yerevan as a territory “historically belonging to Azerbaijanis” in this sense ... At the same time, both of these leaders are well aware that in the very near future Armenia will face not only a change of power and a serious adjustment of foreign policy positions (the country is already talking with might and main about the creation of a Union State with Russia), but, above all, a full-scale reform and modernization of the army and the entire defense complex. With such a development of the situation, it will no longer be possible to repeat the blitzkrieg of 2020.

Such considerations can push someone both in Ankara and in Baku to take very dangerous and thoughtless steps aimed at “accelerating” the process of “final solution of the Karabakh issue”. Presumably, the main goal of the current meeting in Moscow is to exclude even the very possibility of something like this.
Reporterin Yandex News
Reporterin Yandex Zen
6 comments
Information
Dear reader, to leave comments on the publication, you must sign in.