Arctic: US and its allies take concrete steps towards war with Russia 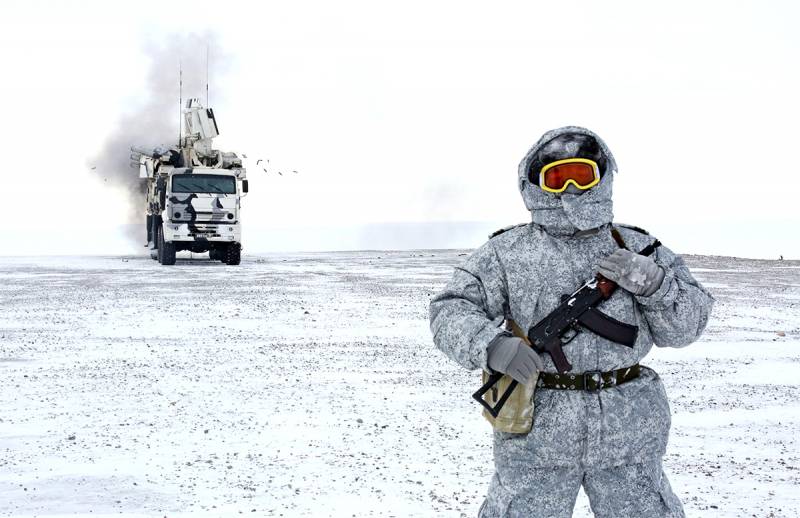 In the United States, a statement has been made at the official level, which with good reason can be regarded as a declaration of war on our country for control of the Northern Sea Route. The high rank and position of the Speaker - US Secretary of the Navy Rear Admiral Kenneth Braithwaite leaves no doubt about the seriousness of the announced intentions and does not allow them to be interpreted other than a direct challenge from Washington to Moscow.


Let's try to figure out how great the threat arising in connection with this, and what the consequences of its implementation may be.

"Freedom of navigation" at the cost of World War III?

As a matter of fact, Mr. Braithwaite announced nothing less than a complete disregard for Russia's position regarding special conditions for the passage of foreign ships (primarily military) in the Arctic waters, along the Northern Sea Route. According to the head of the US naval department, his subordinates in the near foreseeable future intend to "act in this region much more persistent and proactive" in order to "put an end to the claims made by Russia and, to a certain extent, China." How will such actions be expressed specifically? According to the minister, the US Navy plans to "conduct operations to ensure freedom of navigation directly off the northern coast of Russia." In other words, American warships are going to operate on the Northern Sea Route, in the waters that are our territorial waters, just like at home.

Let me remind you that, according to the decision of Moscow, today, in order to navigate the NSR, warships under the flags of foreign states are required, firstly, to officially request permission for this 45 days in advance, and secondly, to provide in advance all the basic data of both the ship itself and its captain. Well, and thirdly, if admission to the NSR is obtained, the "visitors" will certainly have to take on board a Russian pilot. It is clear that Mr. Braithwaite’s department is not going to do any of the above. The best proof of this is the recent boorish trick of the US Navy destroyer John McCain, which violated our sea borders in the Peter the Great Gulf. From there, the Yankees, who had literally lost their shores, had to be escorted out by a clear demonstration of their readiness to use force.

A number of provocative maneuvers organized by NATO forces in the Barents Sea, which reached particular intensity last year, are of the same kind. In May 2020, the US Navy destroyers Donald Cook, Porter and Roosevelt, as well as the British Navy frigate Kent, cruised it for almost a week. Other "allied forces" were represented in the form of the Ulla submarine and two P-3C Orion patrol aircraft from the Norwegian naval forces. In September, a no less representative company arrived at the same address - a task force that included the USS Arleigh Burke-class destroyer and the Norwegian Navy's Thor Heyerdahl frigate, as well as the 23 Sutherland frigate of the British Navy, which was supported by the auxiliary vessel "Tidesprin" "supervised the actions of the grouping." Patrol planes circled in the northern sky - the American P-8 Poseidon and the Danish Challenger, supported by Typhoon fighters of the British Air Force. In total, more than 1200 military men from four countries participated in the maneuvers.

According to the official report, the British sea wolves "guided the task force through many maneuvers, testing its ability to fight on water and under water in one of the harshest regions on the planet." Well, the fact that the test showed the result is rather negative than positive is a separate question, and we will return to it a little later. So far, it is worth noting that by making such demarches, which, in the words of British Defense Secretary Ben Wallace, "are not aimed at provocation," NATO is coming close to an extremely dangerous line, which, in practice, will inevitably be followed by a large-scale armed clash. The fact that Russia does not intend to tolerate a foreign military presence near its northern shores has been made clear in Moscow many times and very clearly. However, for some, these warnings will never reach.

Northern Sea Route and the West: I really want it, but it's very cold

The same Ben Wallace, with the frankness of hereditary pirates and colonialists inherent in the "white Sahibs" from London, in his speeches, has repeatedly acknowledged the true motives behind Britain's actions in the region. The planned sharp increase in the activity of the British Navy in the Barents Sea is due to the fact that "the melting of ice, which fetters the sea routes in the Far North, over time will reduce the delivery time of goods from China to Europe by half." And this, of course, "can bring huge profits" - something really, and such things Mr. Wallace and his compatriots understand perfectly well. And they are only concerned that "Russian barbarians" may "try to openly challenge the principle of freedom of navigation." That is, to prohibit just anyone from roaming back and forth in their territorial waters, without even informing their owners about it. Indeed, barbarism ...

It is because of the desire to control the Northern Sea Route and the potential super-profits from its exploitation, London, through Wallace's mouth, declares that the British Navy now intends to "expand its presence in the North and move forward", operating no further than 100 nautical miles from the Russian coast. Incidentally, Kenneth Braithwaite, who I quoted earlier, also announced "regular patrols" of our shores by American warships precisely because "the sea routes in the North are becoming navigable." Moreover, in the opinion of the head of the American naval department, it is also "an inalienable right and duty of the United States as the dominant naval force in the world" ... In short, if you listen to the Anglo-Saxon ministers and admirals, the words put into the great Russian will soon come true poet in the mouth of Peter the Great: "All flags will visit us!" But in this particular situation, these flags (or rather, naval pennants) are intended to be welcomed uninvited and uninvited. Well, the meeting would be appropriate.

A fair amount of irony lies in the fact that all the grandiose plans described above, fortunately, are still very far from the possibility of practical implementation. The vital truth, let's say, is somewhat different from the victorious reports about "extremely productive operations", which, I remember, broadcast the commander of the frigate "Sutherland" Tom Weaver. Back in 2018, the aircraft carrier Harry Truman showed its full non-combat capability in the conditions of "one of the harshest regions on the planet." The main force of the American Navy, the strike aircraft carrier groups in the Barents Sea, has nothing to do ... However, as it turned out last year, their other ships cannot function normally there either - the previously mentioned destroyer Donald Cook simply froze, as if abandoned in a harsh winter without a garage old "Zhiguli". On it "due to unfavorable climatic conditions" almost all the onboard equipment and weapons were out of order. The formidable ship turned into a defenseless pelvis, dangling on the merciless freezing waves.

Taking into account these completely unreported but extremely unpleasant facts, the entire "series of maneuvers" of the NATO naval group under the leadership of Sutherland boiled down to a rather stupid circling in the Barents Sea in the region of the Norwegian Vardo Peninsula. No one even attempted to really move in the direction of the Northern Sea Route through the Kara Gates, realizing that they could be extremely expensive. By the way, according to available data, the British Typhoons, which until now have not climbed to the North further than Iceland, during the mentioned maneuvers also showed themselves far from being falcons ... With all their great desire to “ride” the Northern Sea Route and dictate their own conditions both the United States and other NATO members today cannot do this physically. It's too cold there for them ...

The US Secretary of the Navy can promise his own "allies" to carry out operations to "ensure freedom of navigation", but let him first specify how he intends to carry them out. With the help of a couple of icebreakers that are far from being in the best condition - against four dozen Russian ones? The Pentagon's grandiose plans for the laying and construction of new ships, including those capable of effectively operating in the specific conditions of the Far North, bringing the number of US Navy combat units to more than half a thousand - that's all, as they say, pie in the sky. In 2020, the head of the American defense department, Mark Esper, was forced to admit that the US military fleet, which in reality does not even reach up to 300 pennants, lags behind the Chinese, which has 350 surface ships and submarines, at least quantitatively. The Russian forces, perfectly adapted for operations in the harshest latitudes, both on earth, in the sky and at sea, in their combat qualities surpass everything that the Americans can try to use in the Far North, many times over.

However, the Pentagon does not seem to be fully aware of this fact and continues to take actions aimed at trying to change the balance of power in their favor. One of the last of these, to put it mildly, ill-considered decisions - the forced transfer to the Eielson airbase located in Alaska of the F-35A Lightning II multipurpose fighter-bombers. It is being carried out, again, "to contain Russia." Now the 336th and 335th squadrons stationed there have two dozen "most modern", but by the end of this year the number of these machines is planned to be increased to 54. One of the local senators, Dan Sullivan, speaking in Washington, boasted that "such a cluster There are no fifth generation fighters and will not be anywhere else on Earth! " A very dubious thing to be proud of - after all, the enthusiasm of such a large equipment, by and large, can only cause those who will aim at him "Daggers" and "Zircons" ...

Military and policy The United States is taking new steps that directly lead to a potential escalation of armed conflict in the theater of operations, where the advantage and chances of success will definitely not be on the side of the United States and NATO. Persistent attempts to cling to the myth of one's own total superiority and "domination" in the world that has long been untrue to reality can lead in this case to a very deplorable result.
Reporterin Yandex News
Reporterin Yandex Zen
36 comments
Information
Dear reader, to leave comments on the publication, you must sign in.