Revenge of globalists: outright "chaos" won in the USA 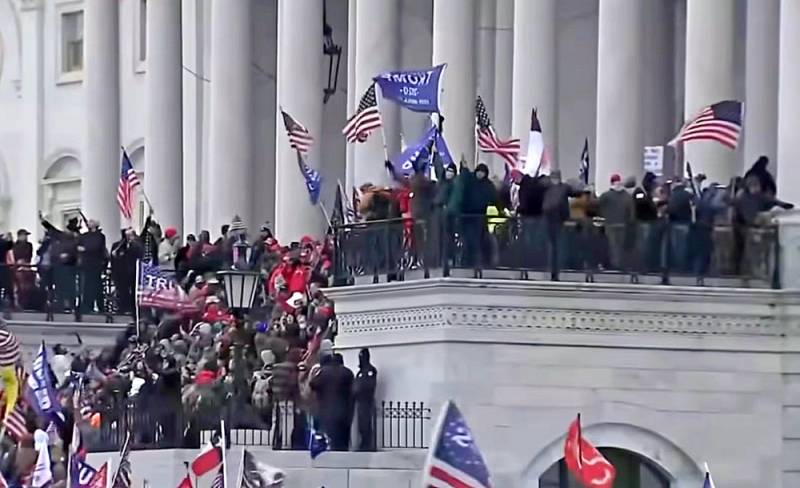 Did you think that all the "tin" remained in 2020? Alas, no, everything is just beginning. The day before what happened in Washington was what can be safely called the end of conservative America and the complete revenge of the "globalists". President Donald Trump, who put his bet on Law and Order, lost miserably, and now the "hegemon", and with him the rest of the world, will be ruled by the most real "lawlessness".


January 6, 2021 in the United States there was its "arson of the Reichstag". The so-called "Trump troops" stormed the American Capitol after calling on the president to resist fraudulent elections, where his victory was stolen. During the attack, shooting was opened, the "Capitoline Hundred" did not work, but four were killed. The police and the National Guard were forced to respond to stop the "desecration of the temple of democracy." What happened will have the most serious consequences both personally for Donald Trump and for the rest of America, which he tried to make "great again."

Trump, who apparently won the presidential election, actually lost, because he relied exclusively on legal measures to defend his victory. He did not use force and administrative resources, did not turn to the "street", intending to protest Joe Biden's "victory" in court. The latter played a cruel joke on him. His opponents, the Democrats, who got their hands on the "color revolutions" around the world, apparently, the Republican was harshly set up. At a rally in Washington called Save America March, President Trump said:

We will never give up, we will never admit defeat. It will not happen. You cannot admit defeat when it comes to theft. Our country has gone through enough. We won't take it anymore.
After that, some of his "supporters" rushed to the Capitol, where the vote was being counted at that time. Wrapped in American flags, they began to attack the police, shooting began, and casualties appeared. The president himself appealed to his "army" with an appeal to remain calm and did not support their actions. In the same vein that "violence is not our method," said Donald Trump Jr. But we all know well whose method it is.

There is information that among the storming of the Capitol were activists of the so-called AntiFA, "street militants" of Biden's headquarters. Let's face it, what happened looks like a setup by a Republican. The indignant comments of the leaders of the US Democratic Party indirectly testify to this. Barack Obama called yesterday's events "violence, dishonor and shame, fueled by the incumbent president." Bill Clinton accused Trump of "attacking the Constitution and the country." George W. Bush even said something about the "banana republic". It is interesting that the prominent Republican Mitt Romney joined them and declared about "the uprising incited by the president."
In general, for Donald Trump personally, this whole story can end very badly. The case smells not only of the promised impeachment, but also of serious criminal cases. However, Trump's defeat is also the defeat of the entire conservative America, where a brazen and cynical coup d'état undoubtedly took place.

Democrats Joe Biden and his vice president Kamala Harris will soon visit the White House. In addition, the US Democratic Party is now taking control of the legislature, thanks to the victory over the Republicans in Georgia. By a strange coincidence, when counting the votes, the same Dominion system was used, which had already helped Sleepy Joe in November. The Democrats prevailed in the same dramatic style "with the last bit of strength." Given the fact that the Vice President of the United States heads the Senate and has the right to vote, the "globalists" gain almost complete power over the country. The Republican Party still holds the Supreme Court, but that didn't help her much.

The consequences will be extremely serious both for the United States itself and for the rest of the world, given the degree of influence of the "hegemon." Political scientists and numerous experts are now speculating that Donald Trump and the Republicans will be able to recoup in 2024. Yesterday's "arson of the Reichstag" put an end to these naive dreams, which, with a high degree of probability, will end up being put on prison bunks for him. The leadership of the Republican Party also actually bowed before the Democrats, which dealt a heavy blow to its image in the eyes of voters. She simply may not have a chance of revenge in four years.

The US Democratic Party makes no secret of the fact that it is not averse to destroying the traditional two-party system and becoming a sort of "United America". For this, Joe Biden's team will have to carry out a series of reforms, which we will discuss in detail told earlier. First, Democrats can graciously legalize the millions of migrants that constitute their loyal electoral base. Due to this, they are guaranteed to take Texas for themselves, and they will not be able to defeat the Republican candidate in 2024. Secondly, Washington will be able to increase the number of states in the country by accepting new ones, for example, Puerto Rico, into the federation, and splitting the existing ones into parts. If we correctly take into account the sympathies of the population of these territories, the Democratic Party will receive new electors and senators loyal to itself, which will consolidate its stay in power forever. Third, the White House will expand the composition of the US Supreme Court with its supporters from eight to fifteen.

In addition, Biden's team can open the US borders to new migrants, sending them to those states where the Republican electorate is still dominant, to "dilute" it. After a while, these states will become a support for "globalists" who will have the right to raise the issue of changing the very system of American elections, and this will leave the Republican Party no chance of returning to power at all. To summarize, it turns out that yesterday conservative America lost, it is likely that forever. Trump's stake on Law & Order was beaten, outright "chaos" won out. And this is extremely unfortunate.
Ctrl Enter
Noticed oshЫbku Highlight text and press. Ctrl + Enter
We are
"We must beat first": the geopolitical alignment around Russia is continuously deteriorating
Ten "defeats" of Putin
Reporterin Yandex News
Read Reporterin Google News
37 comments
Information
Dear reader, to leave comments on the publication, you must sign in.