The storming of the Capitol: in the United States, not a revolution, but something much more dangerous 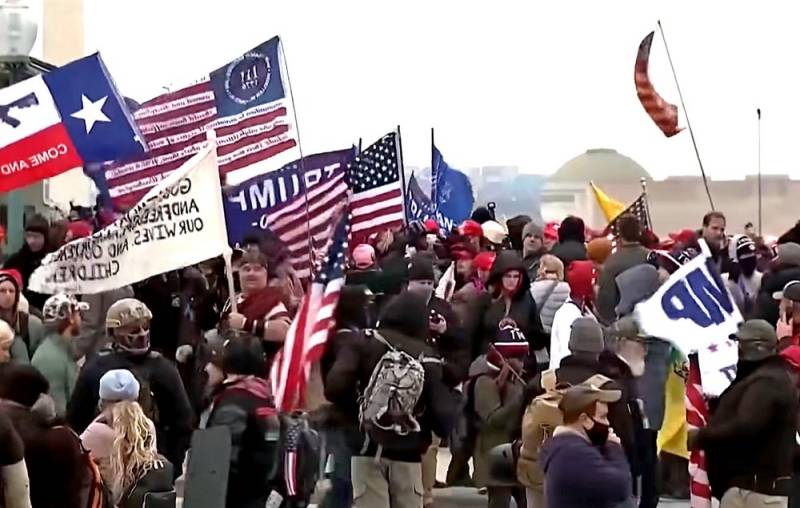 The events that gripped Washington on January 6 were largely predictable and even quite concretely predicted by some analysts. Nevertheless, the overwhelming majority of both the citizens of the United States itself and the inhabitants of other countries of the world did not believe to the last that it would come to the storming of the main American government institutions, shooting and shedding blood in the "citadel of world democracy."


Nevertheless, this is exactly what it all came to. So what happens in the “shining city on the hill” from where for many decades the rest of the world has been teaching, trying to “educate” and “guide you on the right path”? Is it really a revolution ?! Let's try to figure it out without unnecessary emotions.

"We see the city of Washington in the beginning of the year ..."

Honestly, the lines from the immortal poem by Sergei Mikhalkov still pop up in memory in the process of viewing messages from today's news tapes, 99% filled with disturbing news from overseas. Well, fortunately, soldiers with sailors do not run around the American capital, especially when they shoot on the move. Anyway, at the time of this writing. According to available information, the Pentagon most decisively rejected the request of the Speaker of the US House of Representatives Nancy Pelosi, officially transmitted through the Capitol Police Department, to immediately send the National Guard to "clear the building of the raging crowd." In any case, this is exactly what the representatives of the Democratic Party say, indignant and shocked by the events unfolding in the center of the American capital. By the way, White House press secretary Kaylee McEnany claims that Donald Trump tried to give a similar order to Washington to restore order to the military.

Nevertheless, the people in uniform preferred to maintain complete neutrality - the main thing for them is not to end up in the role of the extreme, and even though the grass on the lawn in front of the White House does not grow ... For everyone, the very protection of the "temple of democracy" had to take the rap, which, by the way, Trump asked his raging supporters to "support" in his personal address. It turned out badly with support - it all ended with shooting to kill. Either the guards, or (according to another version), US Secret Service officers opened fire and wounded at least two of the uninvited guests. The condition of one of them, a young girl, was assessed as "critical".

As a matter of fact, everything happened according to the classic scenario of "spontaneous popular revolt" - at first, it seemed, well orchestrated, but later got out of control and took on the features of "senseless and merciless." The Internet is already full of photographs of the Capitol "invaders". Honestly, it is almost impossible to distinguish them from absolutely similar photographs taken at one time in Kiev, Tbilisi, Yerevan ... Here are citizens with faces completely not disfigured by their intellect gutting the offices of congressmen or dragging their favorite interior items - obviously for souvenirs. These are the same "fighters for democracy" who freely sit in the speaker's chair, and who at the service table of Pelosi herself (and that's what the old woman was angry about!) ... Half of those walking around the Capitol generally look like some kind of freaks dressed up in suits, more befitting a Halloween party than a civil rights process.

There is a feeling that the boomerang of "color revolutions", "Arab springs" and other "Maidans", having made a full circle, landed with a crash and crash exactly where it was launched from. However, it is not. Or rather, not quite so. As they say in one well-known and very vital anecdote, "Maidan" in the United States is impossible because there is no US Embassy in this country. " And this is the absolute truth. All those lewd practices that in the last couple of decades have been called "revolutions", even with the prefix "colored", of course, are by no means such. All these are coups d'état, inspired from abroad and supported by a certain, most rotten and corrupt part of the local "elites". Something completely different is happening in the United States today. What exactly?

"Infernal Battle for the White House"

A real revolution (based on the situation according to the formula: "the upper classes cannot - the lower classes do not want") is all the more impossible in the United States. With all the colossal material and social inequality that exists in this country, with all the bulk of existing problems, there can be no question of it. Take at least the fact that the overwhelming majority of Americans' commitment to government aid and support in the form of loans, allowances and even ration cards is an excellent vaccine against the transformation of the amorphous and disunited "popular masses" into cohesive ranks of "fighters against the regime." Besides, here's another question: who could lead such a struggle? Trump, Biden, Pelosi, Pence - all these are, in fact, puppets from one box, like the Karabas-Barabas dolls. Yes, sometimes some of them begin to think of themselves as "independent", but this in no way negates the unbreakable threads stretching to their limbs.

A rigid two-party system within which there is политическая The “struggle” of representatives of the same ruling class, quite conditionally divided into “Republicans” and “Democrats”, determines the absence in American society of real forces capable of changing the existing political or social order. You can believe in the existence of a so-called "deep state" in the United States or consider it a conspiracy fiction, but deny the fact that behind the presidents, secretaries of state, the heads of the Pentagon and the CIA, in a thick shadow, there are powerful forces that "shuffle" and change them in their own way desire is simply impossible. So who will fight with whom in this situation and for what?

In fact, the beginning of the riots that resulted in the storming of the building of the US Congress was initiated by a rally organized by Donald Trump with the pretentious name "March to Save America", at which he once again announced that his legitimate and fair victory was "stolen", and "American democracy turned out to be worse than in third world countries." After that, from the lips of the still incumbent head of state there was a call to US Vice President Mike Pence "to act honestly and give victory to the Republicans", as well as assurances that he "will never come to terms with the defeat received due to Democratic fraud." As a matter of fact, Trump did not explicitly call on his own supporters to storm the Capitol, where at that moment a joint session of both houses of Congress was held, dedicated to the official recognition of Joe Biden's presidency. He simply did everything for them to go there ...

His further appeals to the Capitol protesters smashing to smithereens and in half, whom he seemed to persuade "not to conflict with the police", "to vacate the occupied premises", "to go home" and generally behave decently, this is ... Well, you understand. Something like a mantra from the cat Leopold: "Guys, let's live together!" As a matter of fact, the main effect has already been achieved - the meeting of the congressmen has been interrupted, they themselves, according to information from some sources, are hastily evacuated somewhere to a "protected military base", and the proclamation of Biden as the new master of the White House did not take place. At the same time, it should be understood that it is unlikely that Trump seriously expects in this way to really regain his "stolen victory". No - everything that is happening now is (at least according to his idea) just the beginning of the 2024 election campaign. A very impressive start, admittedly.

With all this, something is still happening in Washington, which, I suppose, does not fit into the plans and intentions of Trump or any of his supporters. This is not a revolution - it is a breakthrough into what seemed to be the most stable, strong and orderly "heart" of the Western world of the elements of chaos on the planet. The revolution has clear goals and objectives. She always has leaders with whom to negotiate. A revolution is a transition of society to another level (it does not matter - the highest or the lowest), but a different one. Chaos has no leaders, it has no goal, except for the destruction of everything and everything around. He is completely irrational and unpredictable. This is a blind, cruel element, which is incredibly difficult to fight, and sometimes even impossible. Its attack on the United States was evidenced by many events of the past year, however, to all appearances, Washington did not believe that it was serious. As it turned out - in vain. Most likely, the current unrest will be suppressed, and the country will once again return to some semblance of a normal and measured life. However, on January 6, 2021, the United States took another huge step towards its own collapse.

At the time of the end of this article, information from Washington is quite contradictory. Some sources claim that the Capitol is completely cleared of "invaders" by the forces of law and order. Others say a fire broke out in the building, caused by deliberate arson. Washington has imposed a severe curfew with a complete ban on citizens outside the home. According to reports from local law enforcement officials, improvised explosive devices were found near both the Democratic and Republican party headquarters. Also, a bomb-like object was found near the Capitol. A number of US senators allegedly announced the beginning of the procedure for preparing the impeachment of Donald Trump in order to guarantee and kick him out of the White House before January 20 and “save the country”. Trump himself, turning to his supporters, condemned the violence ... and immediately reiterated the "stolen elections"! Joe Biden called it "mutiny" and "the darkest moment in modern American history." The girl, wounded by the guards of the Capitol, has died. Her name has not yet been announced, however, something suggests that in the coming days the whole world will know him.

Trump supporters got a heroine and a martyr. "Sacred sacrifice" on the altar of "great American democracy". "The hellish battle for the White House", which Trump, I remember, promised Biden, is being implemented and it seems that this is just the beginning. A country that has sown the wind around the world for years is reaping its storm today.
Reporterin Yandex News
Reporterin Yandex Zen
69 comments
Information
Dear reader, to leave comments on the publication, you must sign in.