The Russian Navy can replenish with two aircraft carriers: what kind of ships were laid in the Crimea 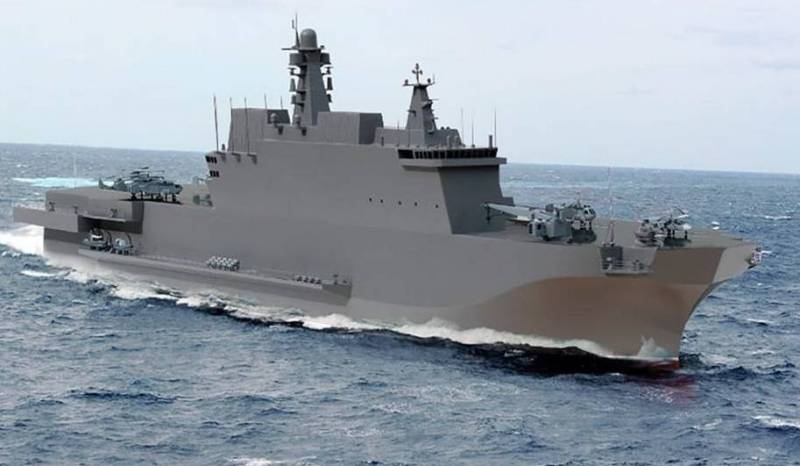 The debate about whether Russia needs its own aircraft carriers or not has been going on for many years. Complicating the issue is the fact that the only domestic aircraft-carrying cruiser "Admiral Kuznetsov" has shown itself in practice not in the best way. Projects "Storm" and "Manatee", it seems, will remain on paper for more than a decade, however, most likely, the Russian Navy may still receive a pair of light aircraft carriers in the foreseeable future. How can this be possible?


Last year, two Project 23900 universal amphibious assault ships (UDC) "Ivan Rogov" and "Mitrofan Moskalenko" were laid down in Kerch. They are considered our response to the French Mistral helicopter carriers that were never delivered. All components for both ships must be strictly domestic production. UDCs are designed to transport thousands of marines, 75 armored vehicles, 4 landing boats, as well as 16 helicopters: Ka-29, Ka-27, Ka-31 (RER), Ka-52K shock and several drones. Given that Moscow is now pursuing an active external policiesusing their military contingents abroad, the ships will obviously be useful. However, there is a possibility that both UDCs have a slightly different fate. President Putin personally hinted at this:

They are good, modern. We even planned to redo them a little and use them for other purposes. Almost the same, but for different purposes. But now I will not talk about it yet.
For other purposes? This is already interesting. If you look at the entire short history of their construction, you can see how the displacement of ships is constantly growing. First, the figure was 15 thousand tons, then 20 thousand, then 30 thousand tons. The last officially announced displacement figure for both UDC is 40 thousand tons. The resulting ships are of a very decent size. By the way, the "Admiral Kuznetsov" has a total displacement of 59,1 thousand tons, and the Japanese helicopter carrier Izumo "type 22DDH" - 27 thousand tons. We remembered about these two ships not in vain, since the heavy aircraft-carrying cruiser "Admiral" was originally designed as a helicopter carrier, and Tokyo recently decided to turn both of its helicopter carriers into light aircraft carriers, equipping them with American F-35 aircraft.

Inevitably, one has to ask the question, can not both Russian UDCs be transformed in the same way in the future? The ability to transfer two thousand marines with armored vehicles somewhere is good, but having a couple of aircraft-carrying ships in the Black or Mediterranean Sea is even better. True, then the second question arises, which aircraft can be accommodated on "Ivan Rogov" and "Mitrofan Moskalenko". If the much larger Kuznetsov had landing problems, then what about the converted UDC?

And here we can recall that at the end of the existence of the USSR, we had already created the Yak-141, a supersonic all-weather carrier-based fighter, which was intended for use on the Admiral Kuznetsov and its brothers. The unique aircraft set a lot of records, but on a promising project it put an end to the collapse of the Soviet Union, which made the Yak-141 useless. The formal reason for the curtailment of work was the crash of the fighter during landing, and mass production did not begin. Interestingly, according to the American edition of Task and Purpose, the Lockheed Martin corporation could have been inspired by the Soviet fighter when creating its "unique" F-35, since at one time it did not disdain to cooperate with the Yakovlev Design Bureau:

Almost certainly, the data collected from the old Soviet VTOL aircraft project was used in the development of the VTOL F-35 Joint Strike Fighter variant. This means that the F-35 owes at least part of its existence to the Soviet-era weapons program.
So ... And we are always told that this is the United States ahead of the rest of the world.

Since 2017, Russia has been developing a new vertical takeoff and landing aircraft (VTOL). The implementation period of the updated project, which will clearly be based on the developments on the Yak-141 and its version called the Yak-201, is estimated at 7-10 years. Supersonic VTOL fighters can be used both on aircraft carriers and on land, where there are no prepared runways. If this project is revived and modernized, Russia will receive an excellent multipurpose aircraft that can serve both on land and in carrier-based aviation, and the Russian Navy will replenish with two light aircraft carriers.
Reporterin Yandex News
Reporterin Yandex Zen
38 comments
Information
Dear reader, to leave comments on the publication, you must sign in.