What Russia was able to achieve in 2020 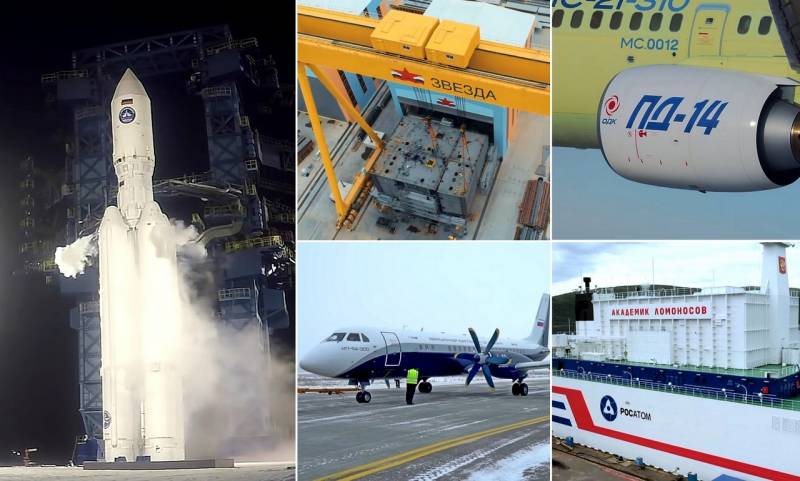 After the collapse of the USSR, the young Russian Federation, like other former Soviet republics, began to be actively drawn into the so-called "Western world". Since transnational corporations (TNCs) do not need competitors, the industry that we inherited was to be liquidated under the most plausible pretexts.


Why do we need our machines or computers, which the Russians still don't really have to make them? We need to focus on the production and export of hydrocarbons, and high Technology leave to those who understand this better. Then we will buy everything that is needed abroad for petrodollars. Terribly “ineffective” state enterprises should be transferred to private hands for symbolic money, and it is here that they will truly reveal their potential. Free market, fair competition, capitalism, happiness! ..

In practice, these false myths turned into predatory privatizations that spawned a narrow layer of oligarchs. Thousands and thousands of factories simply ceased to exist as unnecessary. How can a domestic industrial enterprise that, for example, have no opportunity to take an affordable loan to modernize its equipment, can compete with the products of TNK, which has free access to the Russian domestic market, with its lobbyists in high government offices? It turned out that the free market and capitalism are happiness only for monstrous Western corporations, which themselves dictate the rules of the game, and Russia is destined to play the role of a peripheral raw materials semi-colony.

In all its glory, the validity of this statement was manifested in the period from 2014 to 2020, when the United States and its allies began to impose sectoral sanctions against our country. Suddenly it became clear that Russia is critically dependent on its geopolitical adversaries, the NATO bloc. This is also the supply of imported components for the civil sector. economics and the defense industry, and the right to use foreign technologies, and even in the matter of selling our key export product, oil and gas, we are totally dependent on "Western partners". For many years we have been building pipelines for them at our own expense and begging the Europeans to buy our gas.

You can't live like this. Large-scale industrialization and diversification of the Russian economy, real import substitution are needed. And certain steps in this direction have already been taken. Ill-wishers try to portray Russia as a wild and backward country, but, fortunately, this is far from the case. Despite the activities of systemic liberals in power, we still have a lot of groundwork in the field of high technologies. Let us recall the main achievements of the country in the outgoing year 2020.

Thirteen years later, the first Russian floating nuclear power plant “Akademik Lomonosov” was completed, which headed to the place of its future work in Chukotka. The power plant, equipped with two reactors, has a capacity of 13 MW. Its capacity to provide heat and electricity is sufficient for a city with a population of 70 thousand people. There is even a gym, swimming pool and library for a crew of 100 on board. Rostatom announced plans to build 70 such floating nuclear power plants. They can be in demand not only in hard-to-reach regions of Russia with an underdeveloped infrastructure, but also become an export product of the state corporation to the countries of Africa and Asia.

There is no doubt that our country is still among the world leaders in the field of peaceful nuclear energy. This year, the BelNPP, built with the help of Russian specialists, went into operation. It launched a VVER-1200, a new generation safe reactor. The Akkuyu nuclear power plant is currently under construction on the southern coast of Turkey, where four such reactors will operate. Let's face it, a country with such energy technologies cannot be called wild and backward without blushing. In addition, Russia goes head to head with the United States of America in the development of safe thermonuclear reactors, about which we are in detail told earlier. A super-powerful UVL-2M laser was put into operation in Sarov, which is used in the study of technologies for controlled thermonuclear fusion. Specialists of the Kurchatov Institute were able to register solar neutrino particles formed inside the sun during the thermonuclear CNO cycle.

First of all, it should be noted that Roscosmos has set a certain record: 2 years without serious accidents, which may indicate the establishment of order and stabilization of work within the state corporation. The second successful launch of the Angara-A5 heavy carrier rocket can also be considered a real achievement. told... This opens up new opportunities for civil and military space. The Russian space observatory "Spektr-RG" in 2020 made the first X-ray image of the surrounding space.

It should be added to this that problems on the Russian segment of the ISS have become more frequent, therefore, it is already quite serious started talking on the need to build their own national orbital station. The development of modules for "orbitals" was discontinued 5 years ago, but it is not too late to revive all these industries. A potential project of a domestic space station has already been presented. It will be difficult and expensive to build and launch it on our own, but we can handle it. The heavy "Angara-A5" arrived just in time, it can also open the way for Russia to the lunar and Martian programs. Our country also has developments in the field of a nuclear space tug with a carrying capacity of 10 tons, which the United States did not like so much that they imposed sanctions against the corresponding enterprises of Roscosmos.

The domestic civil aircraft industry can be considered the most affected by the "reformers". The liberals dragged the unprepared country into the WTO, where they immediately adopted new environmental standards for aircraft engines, which the Russian power plants did not comply with. And it’s a no brainer that this was done in the interests of the American Boeing and the European Airbus, which eventually divided our sky among themselves. Capitalism, happiness, right?

The "revival" of the national aircraft industry in Russia was led in an extremely controversial way, having closed the finished project of the short-haul Tu-334 in favor of the "Superjet-100". In fact, the latter turned out to be a banal designer of imported components, which raises the question of its prospects today, when the United States imposed sanctions on the supply of components for the aircraft. Fortunately, our country is still not "snow-covered Africa", as ill-wishers are trying to portray it. There were developments on the still Soviet short-haul Il-114, which they were able to quickly modernize and revive already with modern engines of our own design.

In the segment of medium-haul liners this year it turned out lift into the sky MS-21. The plane is really good and can be a real competitor to Boeing and Airbus, because the US imposed sanctions against this project. But the "wild and backward" country somehow managed to independently develop the PD-14 engine, which now flaunts under the wings of the liner. Also, work has been accelerated on the creation of a super-powerful PD-35 power plant, which will be installed on wide-body aircraft from 2027.

The ultra-modern Zvezda shipyard built in Primorye has launched the first Russian-built Aframax-class supertanker named Vladimir Monomakh. A total of 12 vessels are planned for the series, and the extraordinary speed of construction (a little over 2 years for the entire cycle) cannot but surprise. Shipbuilding gives orders to metallurgists, oil workers, chemists, equipment manufacturers. At the same place, at Zvezda, 5 Arc7 gas tankers are currently being built for the Russian project Arctic-LNG-2; an absolutely unparalleled in the world super-icebreaker of the Leader class has been laid down, winter period. Over the next decade, it is planned to launch 3 vessels of this class. There is no doubt that thanks to such a shipyard, Russia has sharply increased its quotations in the world shipbuilding.

Despite a lot of problems, identified in the domestic health care due to the extreme conditions of the coronavirus pandemic, Russian medicine was among the first to find answers to its challenges. This is evidenced by the rapid development of the Sputnik V vaccine against COVID-19. Also, in parallel, other Russian research centers are developing their drugs. Violent attacks on the domestic vaccine indicate that Western pharmaceutical TNCs see it as a real threat to their products, from which people faint on the air.

Russia still maintains a leading position in the most technologically complex and knowledge-intensive spheres. Of course, our country still has a lot of serious problems, but they all belong to the category of resolvable ones. As they say, there would be a desire.
Reporterin Yandex News
Reporterin Yandex Zen
77 comments
Information
Dear reader, to leave comments on the publication, you must sign in.