Only war with Iran will help Trump stay in power 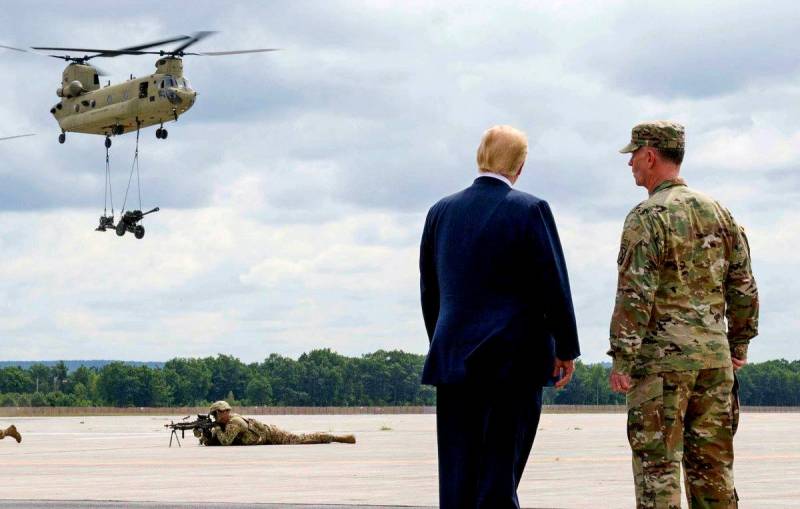 2020 will be costly for the United States. The "globalists" rushing to power carried out a banal coup d'etat in the "hegemon" itself in order to remove the "imperial" Trump from power. The deed is practically done, but now the United States can be placed on a par with some Ukraine or Honduras.


Everything, the "exceptional nation" has ceased to be exceptional, and this is not an exaggeration. Until recently, Americans sincerely considered themselves superior to all other peoples. Still: they had the fairest elections, the most impartial court and the most objective media. All the most. But it ended when the US Democratic Party applied against the US itself technology coup d'état, tested in many other countries, and now the "hegemon" from an arrogant gentleman with a whip and a cane, who considers himself entitled to teach the life of others, has practically officially turned into a banal "gopnik with a nuclear batter".

The open secret is that the Dominion system and voting by mail were used to steal votes from Trump and to falsify them in favor of Biden. Here is what the American president himself says about this:

The proof is irrefutable! Late night mass ballot box stuffing in wavering states, ballot box filling (on video), voters who voted twice, dead voters, false signatures, illegal immigrant voters, banned Republican election observers, MORE VOTES, THAN PHYSICAL, and much more ...
How familiar to the inhabitants of any "banana republic" and many so-called developing countries! But how is this possible in the "citadel of democracy"? Where are the courts, independent media, law enforcement agencies, political party? Interesting question.

The powerful FBI and the US Department of Justice cannot be seen or heard, for which Donald Trump publicly tried to shame them. As a result, the president had to dismiss the head of the Ministry of Justice and the Prosecutor General. The head of the Pentagon, Michael Esper, also had to be fired. The cybersecurity agency claims the elections were fair and honest. The CIA is considered to be directly involved in the process of falsification. President Trump, despite the presence of a heap of evidence, lost in all courts without exception, even in the Supreme, where the Republicans had a good position. The Texas suit was formally dismissed without consideration of the merits.

It played a role that almost 100% of the American press is owned by several globalist corporations, which set the "correct" agenda, independently nominating the winner of the election. They have joined the defamation of Donald Trump and their social networks, which determine which of his posts are "right" and which are "wrong." So much for freedom of speech. The cherry on top is the free press's advice to Trump to "shut up and leave."

The latest evidence of the global conspiracy of the American elites against President Trump is the behavior of a number of his party members. Among them are Mitch McConnell, the Republican speaker of the US Senate, and the former US presidential candidate billionaire and Mormon politician Mitt Romney, who recognized Joe Biden's victory and demanded that Donald Trump admit defeat and leave. In general, deception, cowardice and betrayal are all around.

Why did it happen? Probably because for the "globalists" the US national interests are not a top priority, as for the "imperial" Trump. For them, the "hegemon" is just a printing money press and a military club, which can knock off anyone who does not agree with their rules of the game. America can no longer be great, because the US Democratic Party has turned it into another "banana republic", only a big one with nuclear weapons, but this does not change the essence of the matter. Now Americans will be like everyone else.

Is there anything Trump can do in his remaining days in power? American society is openly discussing the possibility of introducing martial law in the United States. The president himself called the idea of ​​martial law another fake. Indeed, this requires either a serious natural disaster or a direct war, but only Congress can declare war. However, there is a small loophole here. If, in the time remaining in Donald Trump's time, Iran inflicts a "retaliation strike" on the American military infrastructure in the Middle East, the president may respond toughly by starting an armed conflict. And then there will be an escalation, there will be reasons for declaring war on the Islamic Republic and martial law.
Reporterin Yandex News
Reporterin Yandex Zen
13 comments
Information
Dear reader, to leave comments on the publication, you must sign in.