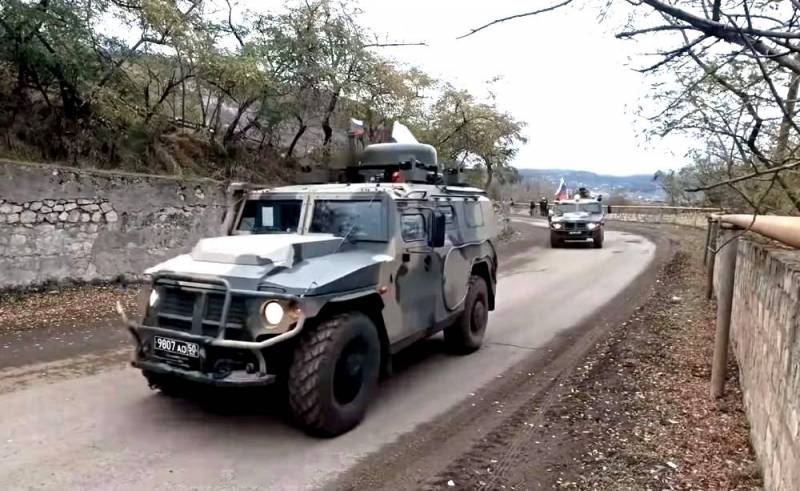 The steadily approaching 2021 could bring a resumption of the armed conflict in Nagorno-Karabakh. The reason for this is the military defeat of Armenia and the resulting political the crisis. The Russian peacekeepers caught between a rock and a hard place will be paying for Yerevan's actions.


The one and a half month war for Nagorno-Karabakh ended with a crushing defeat and surrender of Stepanakert and Yerevan. Russian peacekeepers were called in to fix and stabilize the situation on the renewed contact line, which is now lined up in favor of Baku and Ankara. Recall that the Kremlin did not demonstratively interfere in the conflict between Armenia and Azerbaijan, but after the surrender of Yerevan it sent a whole motorized rifle brigade to Nagorno-Karabakh. Most domestic and a considerable number of foreign media outlets interpreted this as a geopolitical victory of President Putin, but the worm of doubt about this remained, and not in vain.

At first, the supply of two thousand soldiers with the attached combat technique represents the most serious logistic problem, which we discuss in detail told earlier. They need regular food, medical support, supplies of fuel and lubricants, as well as ammunition, especially in the event of some kind of hostilities. All this is complicated by the fact that neither Armenia nor Nagorno-Karabakh have a common border with Russia, and deliveries can only be carried out by air, which in itself is not a cheap pleasure, and even through the territory of countries that are not the most friendly to us. Okay, for the sake of preserving the world you can spend money, but this is far from the main problem.

Secondlyas we already mentioned, even the forces of an entire motorized rifle brigade are frankly insufficient to ensure security along the entire line of contact. The terrain is difficult, mountainous, in the territory occupied by the Azerbaijani military, there are Armenian enclaves, which Baku with a clear conscience cleans up with the help of special forces, because of which blood has been shed. Russian peacekeepers have already had to wedge themselves between the warring parties.

Thirdly, now there is a new threat to stability in the region. Azerbaijani sources report that some "illegal armed Armenian groups" have begun to operate in the territory controlled by Baku in Nagorno-Karabakh. As a result of their attacks, one serviceman of the Azerbaijani Armed Forces has already died and one was wounded. Since the Armenian population has been expelled from the mentioned territory, it may not be about partisanship, but about saboteurs. The question is who sends them and why.

On the one hand, certain political forces in Yerevan interested in overthrowing Nikol Pashinyan, who has lost popularity among the people, can arrange similar provocations in order to try to carry out revenge and revise the humiliating terms of surrender. Taking into account the mood in the Armenian society, such an approach has some basis. But, on the other hand, Armenia, to put it mildly, is not ready for military revenge today, which led to its quick defeat from the coalition of Azerbaijan and Turkey. It would be very naive and imprudent to believe that with the resumption of hostilities, given the existing initial data, something will change in favor of Yerevan and Stepanakert.

Let's face it, the renewal of the offensive while the enemy is weak and suppressed would be advantageous, rather, for Baku and Ankara. Thus, it rises again question about what the Russian peacekeepers will then have to do. They are expected to somehow separate the opposing sides, but how should two thousand motorized riflemen without heavy weapons, locked in foreign mountains without reliable supplies, do this? In the literal sense of the word, they find themselves between a rock and a hard place in the event of an escalation of the conflict, which is deliberately provoked either by the Azerbaijani "partners" or by the Armenian "allies". In this regard, I would again like to draw attention to the need to adequately define the goals and objectives set for our servicemen and adjust the format of their presence.
Ctrl Enter
Noticed oshЫbku Highlight text and press. Ctrl + Enter
We are
Shameful world. What the parties to the conflict in Karabakh won and lost
Ten "defeats" of Putin
Reporterin Yandex News
Read Reporterin Google News
10 comments
Information
Dear reader, to leave comments on the publication, you must sign in.