Kiev's talk about "total war" is a bluff. This is not what you need to fear 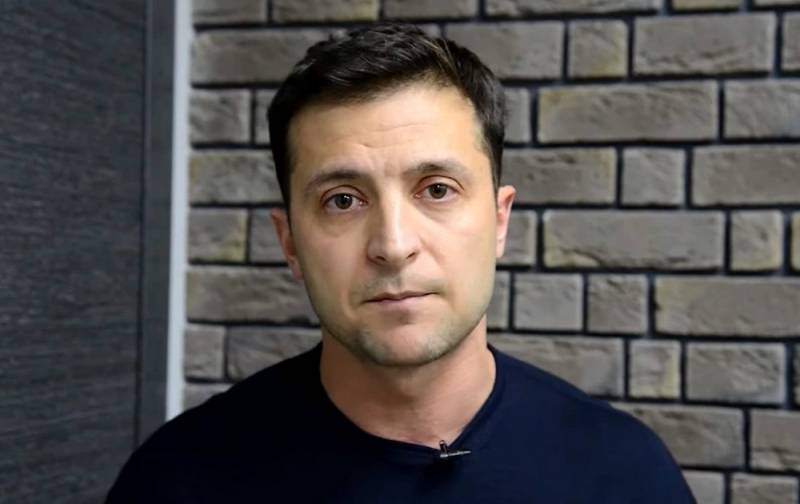 The statement by Ukrainian President Volodymyr Zelenskiy about carrying out “total mobilization” in the country in the event of a hypothetical “Russian attack” caused a completely different reaction, which he probably expected. In “non-profit”, their own “leader of the nation” was for the most part severely criticized, but in our country they were simply ridiculed. The warrior was found ...


However, this situation, for all its obvious absurdity, is not at all a reason for complacently relaxed teasing. While the comedian president allows himself to chat incessantly and to no avail, people much more serious than him continue to work to transform Ukraine into an increasingly aggressive and dangerous vanguard of the anti-Russian "front". And now this is not at all funny.

"And how alone we will die in the struggle for this ..." Will Ukrainians fight?

Those who made fun of Zelensky's words were absolutely right, rightly pointing out that talking about the “general mobilization of both men and women” in a country where “the authorities” cannot get their own citizens to comply with the mask regime and traffic rules (for their own safety!) is at least inappropriate. On the other hand, the gentlemen who assert that "the majority of servicemen of the Armed Forces of Ukraine will quickly go over to the side of Russia," to put it mildly, go too far. Well, or wishful thinking. However, this happens, obviously, because in our country very many have a rather vague idea of ​​the real attitude of the inhabitants of the "nezalezhnoy" to the war.

To say that it is very heterogeneous is to say nothing. As a matter of fact, Ukrainians in this issue can be more or less clearly divided into three different categories. To the first, we can conditionally include those who really will not go to the front line for any price, but will put on a uniform unless under the threat of immediate execution. There are many of them. A lot, I would say. At the same time, such subjects are even verbally “patriotic” and willingly support any Russophobic “movements”. But only and exclusively from a safe distance. The second category, one might say, is the opposite of the previous one. We can count among her "ideological" and really sincere "patriots", not only ready ones, but really eager to fight with weapons in their hands. To deny their presence in Ukraine is simply stupid - after all, the numerous "volunteer battalions" were really not created out of domination. Most of their fighters, alas, have not gone anywhere and have not changed their extremely Russophobic beliefs.

The fact that many of these individuals simply could not realize themselves in a normal life in any area (except perhaps pure criminality) and preferred to clothe their own moral squalor and spiritual emptiness in a beautiful package of "patriotic", but in fact misanthropic ideas, does not change things at all. These will fight. What is most unpleasant, the absolute majority of such cadres either already have real combat experience, or have not been so weakly trained by their own "ideological brothers" who have sniffed gunpowder. However, it's time to move on to the third category. It is much more numerous than it might seem to someone from afar, and at the same time it is extremely unobtrusive. I had a chance to personally communicate with its representatives, including those who have already visited the Donbass with weapons in their hands - they are quite communicative, and are not at all inclined to hide their own worldview. For them, service, war, participation in hostilities is just work.

By and large, they are deeply in parallel - to work at a construction site (both in Europe and in Russia) or to participate in the "anti-terrorist operation". If only they paid - more and regularly. They are absolutely not an ounce of Russophobes. If they are offered a decent salary, they will fight even against their own compatriots from the East, even against the Russians, even against the Hungarians or some Zulu. Absolutely nothing personal - just "labor migrants". They are not burdened by any principles and beliefs at all, and as a result, they are relieved of "bloody boys in the eyes", as well as other torments of conscience. They will not commit atrocities on their own, but the order will be carried out, whatever it may be. Here they also go to fight - under certain circumstances and conditions.

Ukraine as a source of "cannon fodder" for the West

By the way, I forgot to mention another category. About those who, at any cost, evaded and is evading participation in the ATO or the Joint Forces and will never raise weapons against a Russian soldier in their lives. And this is not because of the unwillingness to "put the head under the bullets", but solely out of convictions. Such people, if our army comes to Ukraine, will sincerely see it as a liberator and savior. But this category, alas, is small and has a tendency to constant decrease. Someone leaves the country, someone passes away, and someone just breaks down ... policy (a former deputy of the local parliament) Vasily Volga, who says that "the Kremlin simply does not understand or does not want to see objective reality." According to Volga, it lies in the fact that "the joint efforts of the new Ukrainian education system," mass culture ", mass media and even the church represented by the OCU and similar schismatic organizations have already transformed Ukrainians into anti-Russians by 60%, at least." I will neither agree nor argue with the named politician "interest rate", because I do not know by what method he derived it, but the fact that he indicated the general tendency absolutely precisely is a fact.

For those in doubt, I will give one example - one of the largest in the USSR, the Kiev Museum of the Great Patriotic War was long ago turned into a memorial to the "Maidan", ATO and Bandera scum. Moreover, its leaders and employees did this not at all at gunpoint ... All this I am setting forth solely in order to substantiate a simple thesis - the number of citizens of the "nezalezhnoy" who will consider a war with Russia a completely normal thing, alas, is growing every year. This is an objective reality. And as for the creation of the necessary circumstances and conditions, which I mentioned above, here is a separate conversation.

Now in our country, the words of the Deputy Secretary of the National Security and Defense Council of Ukraine Serhiy Krivonos (by the way, he is not a general at all, as he is represented, but a colonel) are widely quoted, who spoke extremely harshly about Zelensky's “unrealistic” initiatives regarding “general mobilization”. At the same time, for some reason, no one mentions a few different words of the same character, spoken by him not so long ago. Colonel Krivonos, in another interview, very ardently defended the idea of ​​creating private military companies in Ukraine. Here they are, in his opinion, just can become the very way "to fight not with meat, but with a small number of personnel in combination with an advanced technique", About which he spoke, criticizing his president. Moreover, the NSDC deputy secretary sees in the country such a number of "veterans who do not want to be anything but warriors" that if, as he believes, "an urgently needed law on PMCs" is adopted, he predicts a "non-profit" entry "to the world market." Here are the conditions under which a significant part of Ukrainians will indeed “get under the gun”, and not because of any “mobilization” invented by Zelensky, but very voluntarily. You will say that this is unrealistic due to, at least, material reasons?

Let's take our time. While Zelensky was busted in front of journalists about the "last and decisive battle" in which he is ready to lead his people without exception, the deputy head of his office, Roman Mashovets, was dealing with much more important issues. In particular, he held a meeting with the US Charge d'Affaires in Ukraine Christina Quinn, dedicated to summing up the results of cooperation between Kiev and Washington in the military field in 2020 and, most importantly, developing plans to expand and deepen work in this direction for the next year and even more. long-term perspective. The most interesting, you know, the conversation turned out, apparently!

According to official information about the event, Mashovets, who represented the head of state, made very large-scale proposals. In particular - to immediately begin working out a draft bilateral agreement on defense cooperation. The document should cover all areas of Ukrainian-American cooperation in this area, including, in particular, "the personnel policy of the army and the military-industrial complex, the development of the combat capabilities of the Armed Forces of Ukraine, the comprehensive support and arming of troops, the reform of the military-industrial complex, the training of military units and the development of defense technologies" ... In a word, the "nezalezhnoy" army is not just ready, but tearfully begs to be transferred under direct and complete control from the Pentagon. And there, you know, they don't even mind at all! Christina Queen, in turn, noted the importance of Ukraine joining the NATO Enhanced Opportunities Program and (here it is - the main thing!) "Confirmed the readiness of the United States to continue providing assistance for the development of Ukraine's defense capabilities and to develop new, expanded formats of cooperation with it."

Can the United States go along the path of creating a private PMC, which will be trained by their “specialists”, armed and equipped with the products of the American military-industrial complex, and, in the end, fully controlled by their overseas “mentors” and owners? A very possible option. In any case, the Ukrainian army is already massively trained by instructors from the United States, Britain, and other NATO countries, and the priority is given to practicing the tactics of urban battles, conducting anti-partisan operations and similar things, which are probably planned to be used during the "de-occupation" of Donbass. And then the Western curators will use the survivors of this war and the thugs "tied" in its blood for their other needs ...

Moscow looks at all this with astonishing equanimity, content to ridicule Zelensky's fantasies about creating a Volkssturm in Ukrainian style. The only sign of the Kremlin's "insight" in this matter can be considered the words of Dmitry Peskov, which he said on TV just a couple of days ago. The press secretary of the Russian president finally admitted that "in Kiev, no one is going to implement the" Minsk agreements "- for the implementation of the agreements reached in Paris," no one there even took it. " Well, well, it's better than nothing. However, in this case, the question arises: what to do next with the increasingly militant Ukraine? The United States seems to have the answer. And what about Russia?
Reporterin Yandex News
Reporterin Yandex Zen
11 comments
Information
Dear reader, to leave comments on the publication, you must sign in.