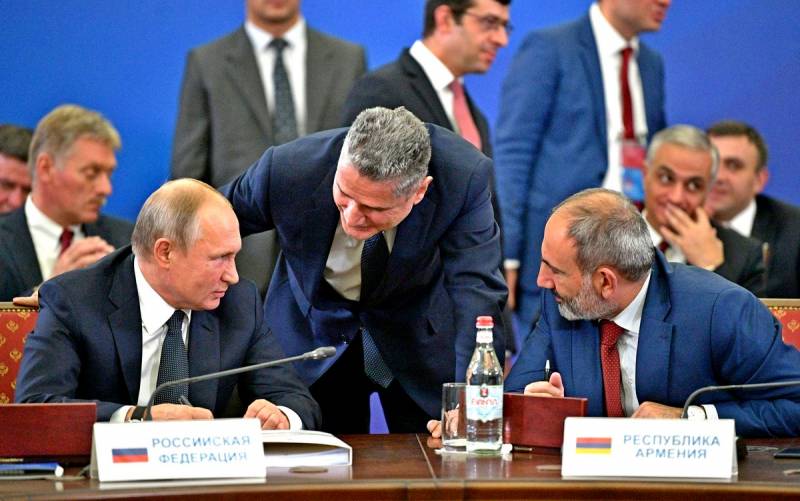 All those who, not so long ago, let off sarcastic taunts about the "geopolitical fiasco of Russia in the Caucasus", life presents one unpleasant surprise after another. No, no one even doubts that the original idea of ​​certain forces was exactly this - inflicting a crushing and humiliating defeat on Armenia, “knock” our country out of the region, proving its “failure” both militarily and politically. But everything turned out a little differently, but to be honest - exactly the opposite.


Today Yerevan is ready for rapprochement with Moscow as never before. How close can such a rapprochement be and what can it bring to both countries?

Why does Armenia need it?

A complete, in fact, military defeat, solely thanks to the intervention of Moscow, which did not result in a final catastrophe in the form of a complete occupation of Nagorno-Karabakh by the Azerbaijani troops and their exit already to the Armenian borders, made many in Yerevan think. As expected, the first reactions to defeat were pain and anger, frustration and resentment. Despite the fact that some tried to channel these feelings into an anti-Russian channel, “throwing into the masses” maxims that “the Russians had betrayed”, the real culprits of the incident were named rather quickly. Moreover, as local policyAnd, for the most part, ordinary people showed unanimity, rare for such cases, pointing to the same persons - the current Prime Minister of the country Nikol Pashinyan and his entourage. Official Yerevan had to make enormous efforts to prevent the spontaneous protests from erupting into a full-scale classic "riot", which would certainly be as senseless as it is merciless.

By the way, Moscow's position played a significant role here, where they made it clear that such excesses were categorically not supported. Pashinyan, despite the popular impulse of his compatriots, managed to stay in power for a while, but now everyone understands that the departure of the leader who lost the Karabakh war is only a matter of time. The opposition does not even want to listen to its proposals for early elections, planned after "wide consultations" for next year - the immediate resignation of the former "Maidan" leader of power remains on its part demand number 1. At the same time, it is of great interest to our country that one of the main things that his opponents blame Pashinyan is "the cooling of relations with Russia."

In fact, representatives of almost all political forces that have unitedly rallied now in order to change Armenia agree on one thing - its further development, and, in fact, existence without the closest cooperation with our country will not only be problematic, but rather , impossible. It doesn't take a genius to realize the obvious - only Russian peacekeepers in Artsakh are holding back Baku and Ankara from continuing the war. However, the term of their mandate is set at 5 years, and the Azerbaijani and Turkish leaders are already broadcasting with might and main about the upcoming conquests, calling almost the entire territory of Armenia their "ancestral lands". That is why, for example, the leader of the Enlightened Armenia party, Edmon Marukyan, recently called for the creation of a second Russian military base in the country, in the Syunik region. According to the politician, in the current conditions, after the loss of the "Karabakh security belt", it is necessary to protect against the Azerbaijani threat.

However, another political force, the Alliance party, went much further in its proposals. In the opinion of its head Tigran Urikhanyan, in the current situation it should be not just about deepening cooperation with Russia, but about creating a Union State with it. The politician emphasizes that in no case is it about the "absorption" of Armenia by our country, but only about "the creation of an interstate union with maximum mutual integration." The representatives of the Alliance see the basis for this as already existing structures, such as the CSTO and the EAEU. At the same time, the main goal for Armenian politicians is "to create joint military units, at least - border forces" and "to protect the borders of Armenia and Artsakh with the participation of the Russian Armed Forces." Quite expected.

Why is it Russia?

It must be admitted that after many ambiguous moments (including rather unpleasant ones) that took place in the process of creating the Union State with Belarus, such a formulation itself causes, at least, caution. “What, again hassle, endless promises and promises, and subsequently - incessant extortionate claims? No, thank you ... ”- it is not surprising if the proposal of the Armenian side will cause just such a reaction. Let me argue that the situations with Minsk and Yerevan are completely incomparable. It was Alexander Lukashenko who at one time could afford to “pump rights”, demand endless preferences and benefits, and threaten the Kremlin to “block transit”, “turn the country to the West” and the like. Those who come after Pashinyan's complete inevitable displacement to power in Yerevan will not have such opportunities. Friendship with Moscow for any Armenian leader will be a matter of life and death for his entire country - exactly as long as Azerbaijan and Turkey are flexing their muscles near its borders. That is, always. So such moments in this case are most likely excluded.

Yes, economic the benefit from such an alliance, frankly speaking, is not visible - the trade turnover with Armenia is today only 0.3% in the structure of our foreign trade. However, in the current situation, we are talking about something completely different. If Russia right now, using the fruits of its own diplomatic victory of November 9, 2020, does not begin to strengthen its positions in the Caucasus in the most decisive and comprehensive way, it may happen that they will be completely lost very soon. At the present stage, Armenia is practically the only country in the region with which it is possible not only to create a strong military-political alliance, but also simply to have good-neighborly relations.

Taking into account completely hostile Georgia and Azerbaijan, which is completely and completely under the influence of Ankara, there is simply no other way out for us. Rather, they don't leave it to us. The statements made by Aliyev and Erdogan at the "victory parade" held not so long ago in Baku, bearing in themselves quite specific territorial claims to neighboring states, alas, should not be taken as traditional boast for the eastern rulers. They really think so, and, what is much more dangerous, they firmly intend to follow the path of implementing their own expansionist plans, completely disregarding others. Delirious either by the revival of the Ottoman Port, or by the creation of the Great Turan, the newly-minted "sultan" instead of talking about "one people of two countries", having gained full control over Azerbaijan, today is already talking about five countries "with one people." If Recep Erdogan is not stopped in the Caucasus, this will have to be done when he ignites the flames of war in Turkestan, over which the ominous shadow of Ankara now hangs. Turkmenistan, Uzbekistan, Kazakhstan ...

The Turks' appetites are not just great - they are huge. One of the areas in which Erdogan has recently sharply intensified his efforts is the creation of a new military-political bloc in the Central Asian and Caucasian regions - a kind of "Turkic NATO" headed by Turkey, of course. What can we oppose to such an alliance, if these ideas, God forbid, come true? CSTO in its current form? Don't even try. New alliances are needed like air, and while proposals for their creation are heard not from Moscow, but from Yerevan, it is perhaps worth taking advantage of such a unique opportunity. The second one may not be introduced ...

By the way, why shouldn't such an association become, at least, triple, including Russia, Belarus and Armenia? To begin with ... In Minsk, the level of negotiability has just significantly increased, so why not act with this factor in mind? In the end, how much talk has been and continues to be that the collapse of the USSR was "the greatest tragedy of the twentieth century," that Russia should, like in the old days, start "collecting land" - solely by the free will of the peoples inhabiting them .. So here it is - the case! Yes, of course, taking Armenia under its protection and complete patronage (let's call a spade a spade), as it has been in all centuries, imposes a number of obligations on Russia and puts it in front of certain risks. But here it is - either a world power, or a "regional state". With the prospect of a "world" section. The third way in the style: "our hut is on the edge" does not exist in reality. And it never existed. Clashes with Turkey, if it continues to follow the current imperial-revanchist course (and it will most likely be so), our country cannot avoid in any case - why deceive ourselves? The question is whether someone will be on our side when we have to confront Ankara and its allies.

And, by the way, with regard to Armenia, there will be others who want it very quickly - in the event that Moscow repels it. As it became known recently from the French media, the local president Emmanuel Macron, during a meeting with representatives of the local Armenian diaspora, rather harshly criticized Nikol Pashinyan for the fact that he “did not ask for support and advice” during the Karabakh crisis. One should not assume that the USA, European states, France, in particular, do not have their own interests in the Caucasus and specifically in Armenia. As it is. And by some strange coincidence, they all go completely against the interests of Russia.

Pro-Western Armenia, which will be forced to sever relations with our country, and then gradually “feed” Aliyev and Erdogan after Nagorno-Karabakh, conducting political bargaining with them, is definitely not needed by either the people living in it or our country. Over the years of its own indecision, Russia has received more than enough "non-brothers" and enemies on its own borders. It's high time to end this. The union of Moscow and Yerevan may well become a long-awaited "turning point" here.
Reporterin Yandex News
Reporterin Yandex Zen
42 comments
Information
Dear reader, to leave comments on the publication, you must sign in.