From "Zircons" to anti-aircraft missiles: how the North Pole will be dangerous for the USA 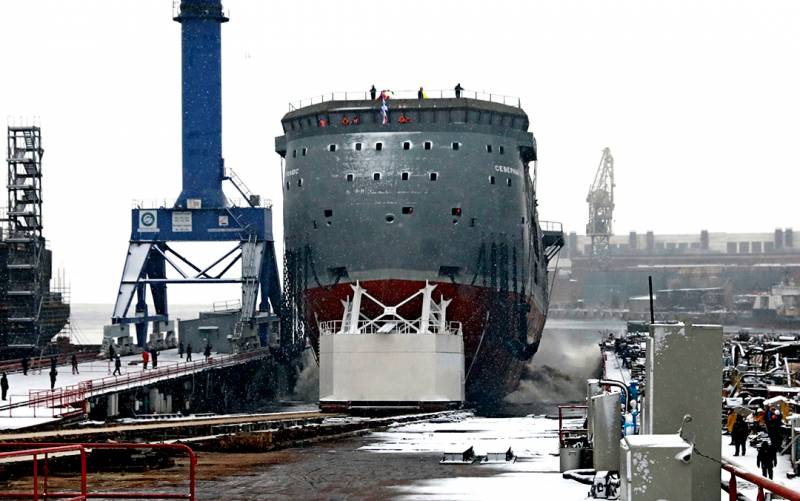 Russia has a unique ship that should help consolidate our dominance in the Arctic. But instead of recognizing this achievement, the Western press casually called him "the ugliest in the world." Let's figure out exactly what the Americans were wrong about.


Strictly speaking, the Russian "North Pole" is not so much a ship as a self-propelled Arctic platform of project 00903. With a length of 83,1 meters and a width of 22,5 meters, it has a displacement of over 10 tons. This swimming apparatus has a pronounced egg-shaped shape, which allowed The Drive to comment on it so unflatteringly:

The new Russian Arctic research vessel may be the ugliest ship we've seen.
However, its amazing appearance is dictated solely by considerations of functionality. The platform is designed for autonomous operation in polar ice for two years. Being surrounded by ice, it is able to freeze in them safely, maintaining the integrity of the round sides, which will simply be squeezed up. Today, no one else in the world has anything like it. This gives Russia truly unique opportunities.

The main purpose of the "North Pole" is the peaceful exploration of the Arctic. In addition to the 24 crew members, 34 passengers, including scientists, can accommodate and work on board. The need for such a platform has been long overdue. The polar ice is rapidly melting, and it is no longer possible to organize a safe permanent station on a drifting ice floe. Ice conditions are constantly changing, which interferes with research. And they are needed.

The official customer for the construction of the self-propelled platform is Roshydromet. However, underwater studies of the bottom of the Arctic Ocean are necessary not only for meteorologists, but for the entire state in order to reliably substantiate Russian claims to the Arctic shelf in front of other competitors. Unsurprisingly, there were $ 100 million in the budget to build such a special ship.

But the "North Pole" also has a military purpose. Do not forget that the Arctic is currently being actively militarized. This vessel is already equipped with a helicopter landing area and speedboats. If necessary, it can be used as a carrier of attack and reconnaissance UAVs, as well as underwater drones. Project 00903 in the future can be deeply modernized based on the operating experience of the North Pole. If we seriously increase the size of the platform, on its basis it is possible to develop a unique Arctic helicopter carrier that will perform anti-submarine functions in the Arctic Ocean, looking for American nuclear submarines. So Russia will get its autonomous floating airfields in the Arctic, which our combat icebreakers will be able to cover.

Theoretically, it is also possible to use them otherwise. For example, after finalizing the successors of the North Pole, it can be turned into carriers of the Kalibr cruise missiles or the Zircon hypersonic missiles, as well as anti-missiles, thereby closing the northern direction. Recall that it is through the Far North that the shortest distance between the United States and the Russian Federation passes for the flight of intercontinental ballistic missiles. In combination with other types of weapons and troops, floating Arctic platforms can make a significant contribution to increasing the defense capability of our country.
Reporterin Yandex News
Reporterin Yandex Zen
3 comments
Information
Dear reader, to leave comments on the publication, you must sign in.