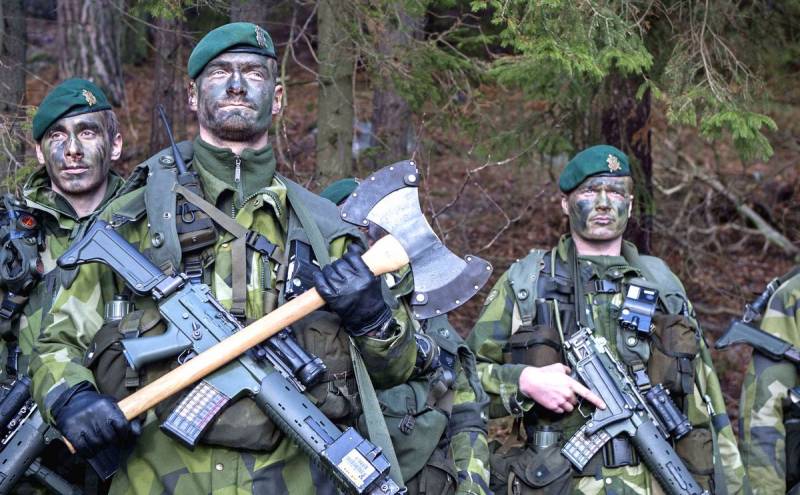 The outgoing year, frankly speaking, did not add stability and peace to the life of mankind. Almost everywhere "old" military conflicts continued, and in some places new, fierce and bloody ones broke out. Alas, it cannot be said that the borders of our Fatherland are in peace and security - the war in the Caucasus, the alarming events in Belarus, the confrontation in the east of Ukraine, the sharp increase in NATO military preparations, which have a clear anti-Russian orientation in Poland and the Baltic states ...


It seems that threats in the Northern direction will soon be added to this alarming list. Once a mortal enemy of Russia, but the last two centuries coexisted with it without any problems and mutual claims, Sweden is sharply changing its course from good-neighborliness to confrontation. How far can this process go?

From war to peace and back

People of today's generations can hardly take Sweden seriously as our country's geopolitical enemy. Nevertheless, let me remind you that this was not always the case. In the list of countries with which our ancestors waged full-scale wars, this state occupies one of the first places. If we take into account only the conflicts in which Russia has participated since the times of the sovereigns Ivan III, Ivan IV, Fedor I and Alexei Mikhailovich, then there are a dozen of them. But if we add to those, as many historians do, fierce battles with those who tried to crush it under themselves and conquer the Swedes of the Novgorod Republic, then the number will probably double. The culmination of the Swedish-Russian confrontation was the Northern War, which Peter I waged for access to the Baltic. Ultimately, our opponents in it, although they added to the list of those who invaded the Russian lands with fire and sword, were completely defeated. Russia has finally turned into an empire, and Sweden has lost its ambition to become one.

However, attempts at armed revenge were undertaken by Stockholm up to the beginning of the 1939th century - with the same negative result for it. Ultimately, they, along with the results of past clashes, cost Sweden almost a third of its territory. From then on, the lesson seemed to have been learned. Nevertheless, the Swedes never missed any chances to spoil our country, albeit surreptitiously - during the Winter War of 11, out of 8 thousand foreign volunteers who fought against the Red Army on the side of the Finns, XNUMX thousand were Swedes. Yes, and military assistance in the form of supplies of weapons, ammunition and equipment Stockholm rendered Helsinki more than significant. During World War II, the Swedes seemed to be neutral, but ... Let's not forget that almost half of the Wehrmacht's weapons were made precisely of metal smelted from high-quality Swedish ore, which flowed into the Third Reich right up to 1945.

After the division of the world into two camps with centers in Washington and Moscow, as well as the creation of the corresponding militarypolitical blocs - NATO and OVD, Sweden announced that it will continue to adhere to a policy of neutrality. She, like Finland, rejected an offer to join the North Atlantic Alliance, of which Scandinavian Denmark and Norway became members. Yes, starting in 1994 Stockholm began to slowly be drawn into NATO's "orbit" - first becoming a member of the Partnership for Peace, then joining in one way or another to various missions of the Alliance in the Balkans, Afghanistan and Africa. And in 2014, at his summit in Wales, Sweden was “blessed” with the status of an “expanded partnership”. Nevertheless, over the past years, the country's military budget has been steadily reduced and the issue of full-fledged accession to NATO has not been raised in principle. Moreover, back in September of this year, Swedish Defense Minister Peter Hultkvist gave an interview to the German newspaper Allgemeine Zeitung, in which he clearly and clearly stated: Stockholm has no intentions or plans to join the North Atlantic bloc. The reason is simple - "unwillingness to increase tension in relations with Moscow."

Nevertheless, literally a couple of months later, the same Hultqvist began to say completely different things. It turns out that the "global security environment" has drastically changed and not for the better, of course. When did this happen? According to the head of the Swedish defense department - "after Russia's aggression against Georgia, the annexation of Crimea and the conflict in Ukraine." Also, Hultqvist is extremely concerned about "the modernization of Russian military capabilities, the conduct of very complex exercises by Moscow and the strengthening of its activity in the Arctic and the Baltic Sea zone." It’s a strange thing - it’s like not an Estonian, but a Swede ... Or is "late ignition" really a distinctive feature of gentlemen with a "persistent, Nordic character"?

Are 200 years of neutrality ending?

In fact, the Russian-Georgian conflict took place in 2008. Crimea returned to our country in 2014. Why did they swing for so long? Or is Mr. Minister still trying to "fit the problem to the answer", coming up with "grounds" for a sharp change in the country's course from neutral to anti-Russian and militaristic? I must say that a significant deterioration in relations between Stockholm and Moscow has been outlined literally in the last couple of years. Let me remind you of some moments from this sad chronology: at the end of February 2019, a certain citizen was detained in Stockholm, allegedly “recruited by Russian intelligence” and working for it. As a result, naturally, a diplomatic scandal erupted.

The fact that what happened was not an accident, but a new state position of Sweden, was evidenced by a voluminous report released just a month later by the counterintelligence service (SAPO) there, in which our country was directly accused of developing some kind of "gray zone doctrine" in which it allegedly "tries to act methods of propaganda, cyber attacks and takeover of strategic companies and technologies ”. The claims, of course, were copied with Scandinavian accuracy from the “senior comrades” - those Western countries that had already launched a frenzied information attack on our country during this period. This was followed by repeated demarches of official Stockholm, which increasingly began to see a threat in Russian military aircraft and ships, which, in fact, carried out completely ordinary sorties and campaigns. The situation was heating up gradually, but steadily. In July of this year, the general military duty, which had long gone into oblivion, was returned to the "neutral" country. The military budget of Stockholm from 2014 to the next 2021 increased by 85%! However, as it turned out, this is far from the limit.

In the future, the country's defense budget for the period from 2021 to 2025 should increase by another 40% and reach a volume of 89 billion kroons or 10,6 billion dollars. This will be a record for the past 70 years. Now Stockholm spends on the military, it needs about 1.1% of its own GDP, but at such a pace, you see, it will soon reach the 2% that Washington requires from its NATO partners. Corresponding changes are taking place in the country's armed forces - there is a rapid "muscle building". First of all, this is expressed in a sharp increase in the staff size of the army, which, according to existing plans, should practically double by 2030, reaching 90 thousand people against the current 55. It is planned to restore the previously disbanded military units, and the stable filling of these new units should ensure an increase in the number conscripts up to 8 thousand people annually, which, again, will double their current number.

Militarily, Sweden should be taken quite seriously - let's not forget that this country, unlike many others in the West, is fully self-sufficient not only with the simplest types of weapons and military equipment, but also with tanks, combat aircraft, and even warships and submarines ... One of the striking examples of the fact that everything that is happening is not empty words, was the deployment by the Swedish army of one of its units on the island of Gotland in the Baltic Sea, again directly linked by Stockholm with the "increased military activity of Russia in this area", which began to cause Swedish side "concern" since 2014. The Swedish military unit based on this Baltic island was disbanded in 2005. Now times have changed.

However, all this might not have looked so alarming yet if Stockholm had not recently begun to take more than real steps, indicating its desire to cross out the neutrality that lasted for two centuries (albeit at times purely on paper) and join the North Atlantic Alliance. Such actions, perhaps, cause much more concern than the formation of new regiments by Sweden and the increase in the cost of their maintenance. Last week, the local parliament, the Riksdag, voted in favor of a decision that effectively opens the way for the country to join NATO. It is about calling on the government to declare in law the possibility of joining the Alliance, which was previously denied in principle at the state level. This is not to say that this highly controversial decision was unanimous - it was adopted by a majority of 204 votes against 145.

Among those who, foaming at the mouth, argue that Sweden today “needs security guarantees that only NATO membership can provide” are representatives of the center-right parties there - the Moderate, Liberal, Center, and also Christian Democrats. The opponents of the North Atlantic aspirations of their colleagues have traditionally been parliamentarians from the Social Democratic and Left parties, as well as the “greens”. The incident lies in the fact that the current government of the country consists of representatives of these very political forces. The ideas of supporters of joining the alliance have already been sharply criticized by the head of the Swedish Foreign Ministry, Anna Linde, who said that such steps would lead to "negative consequences for the country's security."

Alas, as we know, in the countries of Europe, political coalitions and governments sometimes change at a truly kaleidoscopic speed. There is no guarantee that tomorrow in Stockholm those who are torn to "embrace" the North Atlantic bloc will not prevail. And, by the way, the Riksdag voted very amicably for a sharp increase in the army and inflation of the military budget. Without a doubt, such a turn of events does not bode well for Russia. First of all, due to the fact that in the near future the North, in particular the Arctic zone, promise to become an arena for a very tense confrontation between our country and NATO. The increase in the forces and resources of a potential adversary, especially at the expense of a Scandinavian state with a sufficiently developed military industry, should not frighten us, of course, but it definitely does not cause joy.
Reporterin Yandex News
Reporterin Yandex Zen
48 comments
Information
Dear reader, to leave comments on the publication, you must sign in.