Not tested by Syria: why write-off is the best option for "Admiral Kuznetsov" 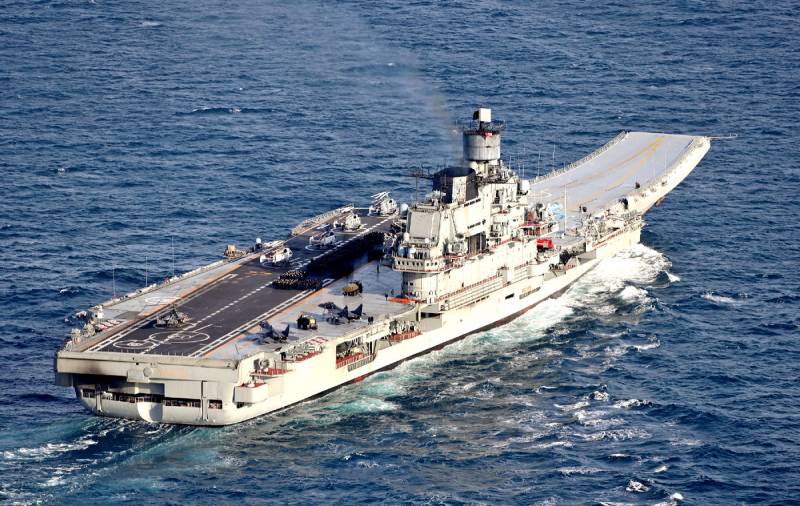 As reported, the command of the Russian Navy hopes for an early return to service of our only aircraft-carrying cruiser, Admiral Kuznetsov. Recall that the flagship of the Northern Fleet was first nearly drowned during repairs, and then almost burned during a fire. Despite this, the unlucky ship is expected to return, but whether it is really needed today in our naval forces, let's try to figure it out.


Let's face it, this is not the most successful aircraft carrier in the world. The problems are of a constructive nature, since initially, before its evolution into Project 1143.5, it was created as a helicopter carrier capable of receiving vertical takeoff and landing aircraft. This was not done because of a good life: the ship was under construction in Nikolaev, and the passage of clean aircraft carriers through the Turkish straits is prohibited, therefore it was necessary to equip it with missiles, turning it into a cruiser. But after that changes were made, and they tried to convert the aircraft carrier into a full-fledged aircraft carrier so that heavy carrier-based fighter-bombers could land and take off on it.

The result made itself felt in Syria, where the path was marked by a smoky trail of problematic boilers. Of the 420 sorties made by naval aviation, according to the data of American observers, 154 were carried out from the deck of the "Admiral". At the same time, we lost 2 aircraft at once in 20 days, not in a battle with terrorists. The reasons were constant technical problems at Kuznetsov, sometimes with an aerofinisher, sometimes with a cable. At the same time, the main real combat load of the Russian Aerospace Forces fell on the Khmeimim airbase. In other words, the aircraft carrier was sent to the Mediterranean Sea as a kind of "scare", but it turned out, alas, not very convincing.

After Syria, some conclusions were made, the cruiser was driven back to the north for deep modernization. And already there a tragic story happened with a floating dock, when the "Admiral" almost sank in peacetime. After he was almost finished off by a large-scale fire during the repair. With all this, the press publishes photographs from the Severomorsk-3 airfield, where aircraft from Kuznetsov are improperly stored, and naval aviation pilots, accordingly, do not fly. The latter is a big problem in itself. Without enough flying hours, pilots simply lose their skills. The NITKA airfield is located in the Crimea, a similar simulator in Yeisk has not been completed, the cruiser is under continuous repair. This means that de facto we do not have efficient naval aviation for an aircraft carrier.

And here it is necessary to ask the question, does Russia need such a defective ship at all? To be completely correct, then this is only part of a more complex and controversial question of whether our country needs aircraft carriers? And we will not have a definite answer to it, only thoughts out loud.

On the one hand, aircraft carriers are traditionally symbolized with naval power, which only great powers are capable of, and the projection of power outward. It is enough for the United States to send its "100 thousand tons of democracy" anywhere in the world to take Washington's point of view on any issue into account. If Russia had a couple of full-fledged AUGs, we could send them to the shores of Syria or Venezuela, anchor them near the Kuril Islands, and the quality of the external policy Moscow would have reached a completely different level.

On the other hand, this "genre" itself is experiencing a serious crisis. With the development of missile and hypersonic weapons, aircraft carriers are increasingly transformed from the Death Star into just a large floating target. It is very expensive to build and maintain them, beyond the strength of today's Russian industry and budget. So far, we have cried the cat too for large surface ships of the far sea zone. What other aircraft carriers? Now, if instead of holding the Olympics and the World Cup, the funds invested in them were spent on building a modern fleet with a pair of full-fledged aircraft carriers, and they were already available, then the conversation would be different. And you see, our military doctrine would not be strictly defensive. In the meantime, you can only lick your lips at the beautiful models of Manatees and Storms, this is definitely not a matter of the next decade, or even two.

So it turns out that the surface component of our Navy is frankly weak. The return to service of the patched "Admiral Kuznetsov" will fundamentally change nothing. The ship is unsuccessful, old, its resource, despite the modernization, is nearing exhaustion. The best thing that can be done for him is to write off, transfer from the north to the Black Sea, where conditions are better for him, and turn it into a training ship, where pilots of naval aviation can keep fit on it in the hope that someday in Russia a full-fledged aircraft carrier will be built.
Reporterin Yandex News
Reporterin Yandex Zen
17 comments
Information
Dear reader, to leave comments on the publication, you must sign in.