Russia risks dropping out of the superpower space race 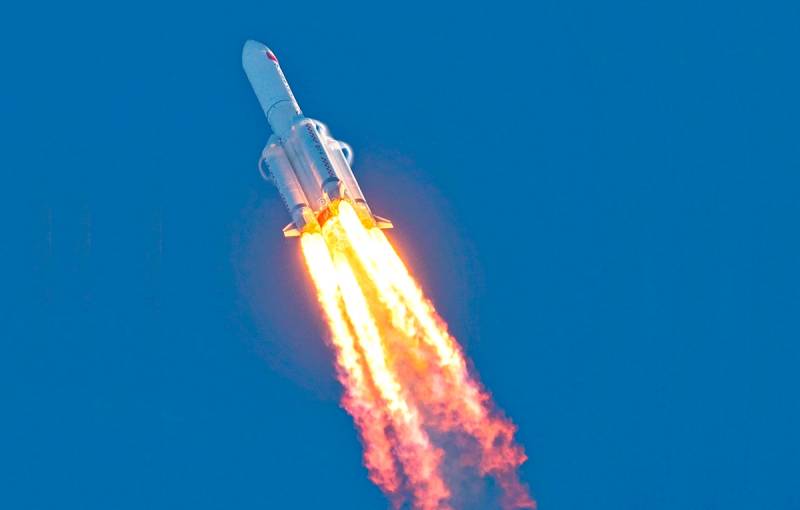 While the head of Roscosmos, Dmitry Rogozin, curses joyfully from the realization that something else is flying in his economy, China is preparing to share the Moon, Mars and the resources of the asteroid belt with the United States. How did it happen that the PRC has become a great space power, whose achievements cannot but cause a feeling of jealousy in Russians?


A certain irritation from the Chinese successes is caused by the fact that Beijing has learned everything from us. Cooperation with the USSR in the field of rocketry began back in 1956, but in the 60s it was curtailed for political reasons. In 1970, the Long March-1 launch vehicle launched the first Chinese satellite into orbit. After the collapse of the Soviet Union, the PRC began an in-depth study and borrowing of our developments on the basis of intergovernmental agreements of 1992 and 1996. Chinese cosmonauts trained in Russia, and their first manned spacecraft, Shenzhou (Shenzhou), painfully resembled the Soyuz. The result was in 2003 the flight into space of the "Chinese Gagarin" Yan Liwei.

It is quite significant that Beijing did not take part in the ISS project, unlike Moscow. Instead, the PRC continued to copy the Soviet Technologyby launching their own orbital stations Tiangong (Tiangong) and Tiangong-2, suspiciously reminiscent of our Salyut and Almaz. So the Celestial Empire became one of the three countries capable of independently launching spacecraft intended for long-term stay of astronauts in orbit. It is quite indicative that the Russian leadership at the same time preferred to get rid of its Mir station, although this decision to this day causes an ambiguous attitude towards itself.

The next step of the PRC was its own lunar program. The Chinese repeated the experience of the USSR, sending several devices to the surface of the satellite, successfully taking and delivering samples of lunar soil to Earth, but were able to go further. The Chang'e-4 mission continues on the far side of the Moon, which no other country, not even the United States, has yet been able to do. Beijing does not hide the fact that the study of the soil is necessary for the future construction of a permanent lunar base, which means a manned flight, which for certain reasons could not be carried out by the Soviet Union at one time.

The development of an earth satellite will take place in several stages, and it should become an intermediate link on the way to Mars and the tempting resources of the asteroid belt. To accomplish such ambitious tasks, China will need its own super-heavy rocket, work on which is already underway. It is called "Changzheng-9" (CZ-9, "Long March-9") and will be able to launch into low-earth orbit up to 140 tons, up to 50 tons on a departure trajectory to the Moon and up to 44 tons - to Mars. The creation of such a giant is a very difficult technological task.

The fact is that the dimensions of the upper stage diameter are limited by the railway dimensions, since the missiles must be transported somehow from the place of production to the launch pad. By the way, dependence on logistics is also a problem for our country. The Chinese approached the solution of the problem radically, abandoning rail transport in favor of sea transport. From the mainland of the country, the cosmodrome was moved to the island of Hainan. But the achievements of the Chinese are not limited to this. They were able to rethink the experience of Soviet engineers and create their own kerosene-oxygen rocket engines with a thrust of over 500 tons and 150-ton solid-fuel boosters. For "Changzheng-9" new hydrogen engines with a thrust of 200 tons are being developed, which were tentatively named YF-220.

There is every reason to believe that China's super-heavy rocket will fly by 2030, damn it. It will allow in one fell swoop to solve all the tasks of delivering a manned lunar mission. Our Angara-A5, like Changzheng-5, is theoretically capable of this only by coordinating several launches, which is very expensive, time-consuming and difficult. Beijing also has another option with the simultaneous use of two missiles at once, one of which will deliver the crew to the lunar orbit, the second - the landing module. By the way, "Chang'e-5" suspiciously reminded specialists of the lunar lander.

But nothing will end there. The Chinese research station Tianwen 1 is already on its way to Mars. In a few months, it should deliver to the Red Planet an analogue of the American rover Opportunity, which will study the atmosphere, soil and magnetic field, as well as an orbital probe, which will transmit data on the state of the Mars space to Beijing. It will be unpleasant to remember that the Russian probe Phobos-Grunt, which was supposed to deliver the Chinese microsatellite Inkho-1 to Mars, in 2011 could not fly away from the Earth and burned up in the dense layers of the atmosphere.

Let's be realistic: the Moon, Mars, asteroids and deep space will be divided between only two technological superpowers - the United States and China, which almost completely parasitizes on our developments. If in the next few years nothing changes for the better in Russia, Russian cosmonautics will only continue to regress under the "curse". And, perhaps, it is worth considering why such a thing became possible at all.
Reporterin Yandex News
Reporterin Yandex Zen
124 comments
Information
Dear reader, to leave comments on the publication, you must sign in.