The scripts for Navalny are being written in the USA. But not in the CIA, but in Hollywood 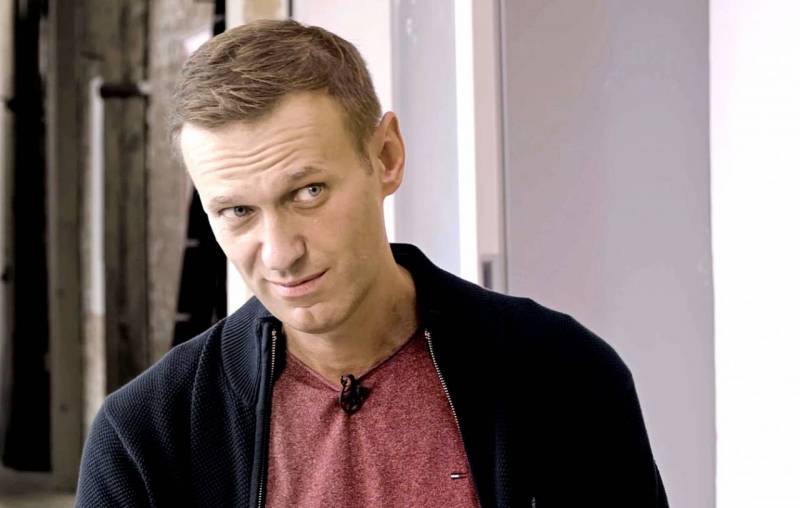 A new page in the "investigation of the century", carried out in relation to his own "poisoning" by the most "die-hard fighter against corruption" in Russia, Alexei Navalny, perhaps should have put an end to this whole story. I will not argue that the last video in this series, critically overflowing with absurdity, completely unrealistic "details", and in general built on an initially impossible situation, is the bottom for this figure.


All the ebullient activity of the “great oppositionist” shows that there is most likely no limit for him to fall ... Another thing is of interest here - why are Navalny's Western puppeteers trying to spur events so rapidly, at the same time making completely miserable insinuations?

Do you remember one of the anecdotes born of the appearance on our television screens of the unforgettable "Seventeen Moments of Spring"? Well, the one where Stirlitz walked along the corridors of the Reich Chancellery and something betrayed him as a Russian spy: either a casually dressed NSDAP badge, or a budenovka on his head and a parachute dragging along the ground behind him ... Kopelyan's voice off-screen: “Yes , Stirlitz has never been so close to failure! " Indeed, Mr. Navalny this time came much closer to his own complete and final exposure as a noted liar and puppet of the West. The statement made on this occasion by the press service of the FSB of Russia, in which the "investigation" is directly named "a planned provocation carried out with the direct and direct support of the Western special services", definitely hits the bull's eye. By definition, the video that was dumped by the "un-etched" fugitive on the Internet cannot be anything else. I say this not because I do not like Navalny, but, on the contrary, I adore the FSB. The reasons are different.

First, it is an outright lie that is always disgusting. Secondly, with his little things, this bitch will rot the very essence of journalism and clearly demonstrates what keeps 90% of the inhabitants of both Russia and the rest of the world for, sorry, complete idiots. Thirdly, the falsehood in this case is instantly, at first glance visible to those who are at least superficially familiar with the specifics of the activities of the special services. Relying on the fact that the rest will "buy" on outright (otherwise not to say) bullshit.

It seems that the script for this nonsense was written by the same crooks who cooked up “masterpieces” of the level of “Red Sparrow” or “Anna” - with absolutely zero knowledge of both Russian realities and the “cuisine” of domestic “power” structures. There are things that are impossible in principle. We will talk about them right here and now. So: the situation that Navalny is trying to "sell" to all of us, as real, is absurd and contrived a priori: he, you see, "called a high-ranking FSB officer" from the number that he took for "his switchboard" and therefore, as dear, posted " all the terrible details of the poisoning. " This is pure nonsense - from the first to the last word! In any special service there are topics on which conversations are not conducted through the telephone under any circumstances. I repeat - absolutely not for any! There are things that are not talked about even in their own offices - perhaps in special rooms equipped with protection from any possible and impossible ways of removing information.

If we assume for a second that the secret service really carried out an operation to eliminate someone, then this is exactly the case ... And it does not matter who the interlocutor presented himself as - even the assistant secretary of the Security Council, even the president, even the Generalissimo of the Galaxy. Even if for refusing to speak to him an unknown person on the other end of the line would threaten immediate dismissal, execution on the spot, and heavenly punishment, a real FSB officer would immediately interrupt the conversation and rush to report to his immediate superior. Do you know why? Because I would take it as a test - at least for compliance with the secrecy regime. This would be the end of the “interview”. Dot.

In principle, further "art" Navalny and his curators can not be discussed, but since we have begun, we will continue, and point by point. At the very beginning of the conversation, the caller introduces himself, as has already been said, as an assistant to the secretary of the Security Council and asks the fake Kudryavtsev to "briefly tell about the special operation" and then "write a detailed report." The first question - what, FSB employees are obliged to report directly to the clerks from the Security Council? And on the phone too? What are these regulatory documents or job descriptions? And by the way, why did the National Security Council suddenly decide to use the FSB switchboard for communication? However, these are technical details, but they are too egregious. The second question - the call, according to Navalny, took place on December 14, and he was "hounded" on August 20. And that, during this time "participants of the special operation" did not write reports about everything ?! Yes, believe me, they would have given birth to them more than Leo Tolstoy - novels. And in no less volumes, by the way. Absolute nonsense ... Okay, let's move on.

From the "investigation" of the "oppositionist" himself, it follows that the man whom he passes off as Kudryavtsev "followed him for a long time." So - in the video, Navalny chirps with his own, not at all altered, disgusting voice, known today, alas, throughout Russia. And the FSB officer, God knows how long his "grazing", will not recognize this voice ?! Don't be ridiculous ... You can try as much as you like to "rub" us about the "blatant level of unprofessionalism" allegedly inherent in the Russian special services (which, again, is a Hollywood fiction, and not reality), however, such a shame would not be kept, let alone in "Top-secret special laboratory of the FSB", but even in the most miserable and staff-starved regional police department in a sergeant position.

The next point is the mentioning of a lot of things in a conversation, as they say, "in plain text." A multivolume philological study can be written on the topic of professional jargon, or rather, the "Aesopian language" used by intelligence officers. Maybe it does exist, I don’t know ... In any case, “person involved”, “subject”, “address”, “product”, “material” - these are the words that can sound even in a very private conversation between two “ operatives "or in a report to the immediate superior. And not stupid and straightforward: "we worked in cowards!" Yes, no self-respecting "opera" would have blurted out such a thing, even in a drunken stupor, to his own reflection in the mirror. Believe me, the habit of speaking in such a way that the meaning of the conversation becomes completely incomprehensible to an uninitiated person, even sitting at the same table, eats into the blood and bone marrow of such people tightly. And it becomes their indestructible distinctive feature forever.

Employees of the "office" of the level to which, according to Navalny, Kudryavtsev belongs, do not say SO! Quite a lousy cast. Deuce, with two minuses. Yes, perhaps, and at all count. Indeed, in the course of the conversation, the “FSB officer”, allegedly sent by the “authorities” to “eliminate evidence in Omsk,” suddenly starts asking puzzled questions: “What happened in Tomsk ?!” So much for the "poisoner". There are so many such egregious moments in a conversation with "Kudryavtsev" that if you start to take him apart "by the bones," there will be no room. And is it worth it to engage in dissection of such an unappetizing subject as another "duck" born by Navalny? Created in the best traditions of Hollywood movies about "bloody gebn", this creation is just as ridiculous, fake and implausible. “There are those who believe,” you say? Well, you never know who believes in what ... In neighboring Ukraine there are still those who believe in the "ideals of the Maidan", so what? You don't have enough room for everyone, you know.

Do people in the West realize that by acting so clumsy and unprofessional, they run the risk of "hacking down" the whole venture in the bud? Hard to tell. Most likely, there really is considered the absolute majority of Russian citizens to be people with very limited mental abilities, moreover, completely devoid of even the slightest ability to analyze and critically analyze the information material presented to them. To tell the truth, what is happening most of all looks like actions in a terrible rush, the desire to be in time for some, as they like to say in the US itself, “deadline”. It is very likely that the elections to the domestic parliament in 2021 were finally defined in the West as such. The most interesting thing is that, without really straining, I managed to find a direct confirmation of this hypothesis. It consists in the following: On December 10 of this year, the US State Department officially, moreover, in writing, notified Congress of its intention to close the country's two consulates, which remained in Russia so far. We are talking about diplomatic missions in Vladivostok and Yekaterinburg. Some people associate this demarche with the "cyberattack of Russian hackers", the scandal regarding which erupted just at the suggestion of the head of the State Department Mike Pompeo. However, it does not add up - the document was clearly prepared a week, or even two before the topic was "raised on the shield" in Washington. The point here, most likely, is completely different.

This, I stress, is not about reducing the US diplomatic presence in Russia - according to the plans of the local foreign ministry, three dozen local consular staff will be fired. But ten American diplomats will move to Moscow. So what we have before us is a real redeployment of forces, bringing them together into a single "fist" in the capital, where a "big deal" is clearly being planned. After all, Russia will simply not allow more diplomats from the United States than there are now to enter the country. Indeed, why would the Americans have a "Maidan" in Yekaterinburg or Vladivostok? According to their plans, a "color revolution" must surely break out in Moscow - after the elections to the State Duma are declared "rigged" in the US Embassy. It is difficult to find another explanation for what is happening, especially in combination with the frenzied pressure that we observe from the West, which is trying at a forced pace to "mold" from Navalny not just a "prominent oppositionist", but a "revolutionary leader" of an all-Russian scale.

It is likely that the United States is using him in the same way as the Ukrainian Gongadze, as a “sacred victim”. Perhaps they will really bet on this more than dubious figure in their special operation to seize power in Russia. We'll find out soon enough. And Navalny too ...
Reporterin Yandex News
Reporterin Yandex Zen
6 comments
Information
Dear reader, to leave comments on the publication, you must sign in.