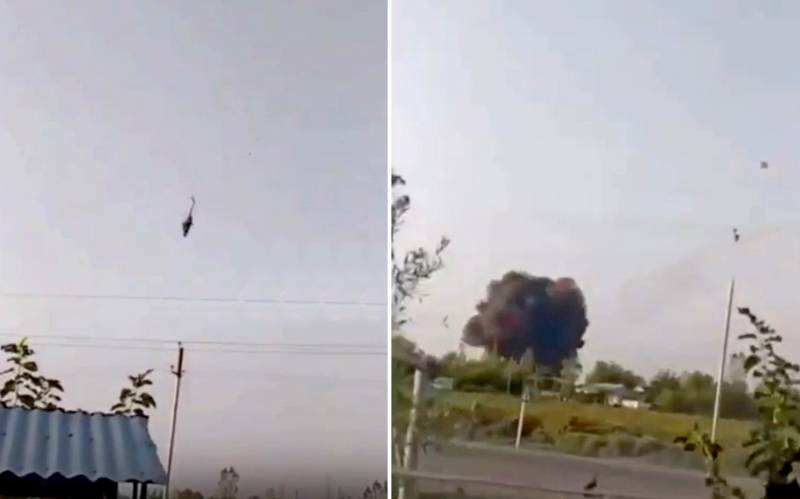 Footage has appeared on the web showing the fall of the Azerbaijan Air Force's Mi-17 multipurpose helicopter shot down by the Armenian military in the sky over Nagorno-Karabakh. The Armenian side claims that we are talking about a rotary-winged vehicle destroyed by a shot from MANPADS on September 27, 2020, on the day of the beginning of the open phase of hostilities.


It should be noted that the video presented does indeed show the Mi-17 helicopter (export version of the Mi-8MT). Moreover, on that day, Yerevan and Stepanakert were informed that such a plane had been shot down by the AONK air defense system. At the same time, the Azerbaijani Ministry of Defense then denied the very fact of such an incident. Later, Baku admitted what had happened.

Users of social networks noticed that in the specified video, only one of the crew members leaves the car, jumping out with a parachute. The opening of the dome is clearly visible, and the person taking the picture reacts to it. The operator even distracted from the moment the helicopter touched the ground and the subsequent explosion. Apparently, he was waiting for the appearance of several open parachutes in the sky.


The crew of the rotorcraft consists of three people. At the same time, the board can carry up to 24 paratroopers. From the short video, only a few assumptions can be made. First, there were no “passengers” in the helicopter. Second, the helicopter crew members could start jumping out earlier, and the video shows the latter. Third, only one crew member was able to jump out.
Ctrl Enter
Noticed oshЫbku Highlight text and press. Ctrl + Enter
We are
The Armenians showed the Turkish "Bayraktar" shot down over Karabakh
The Americans calculated the loss of Russian aviation in Syria in 4 years
Reporterin Yandex News
Read Reporterin Google News
Information
Dear reader, to leave comments on the publication, you must sign in.