The Kremlin "nullifies" Zelensky. What signals did Putin send to Ukraine at a press conference 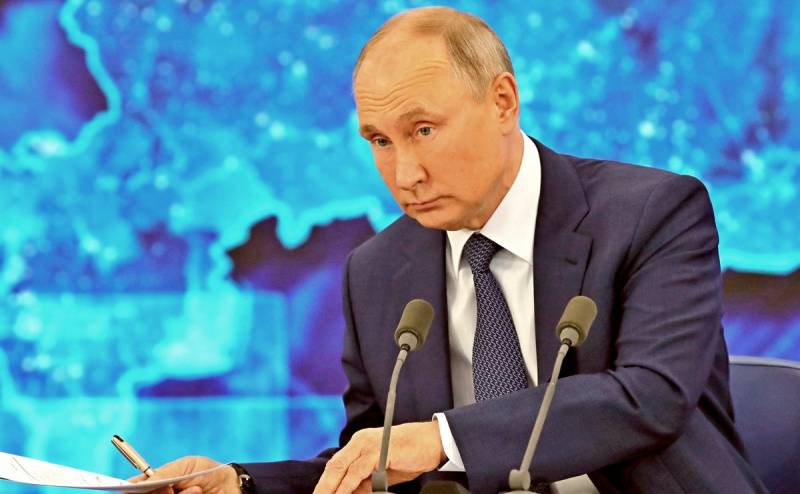 The current traditional press conference of the President of Russia passed without much excitement, sensations and scandals. Some even considered it "boring". Nevertheless, for those who know how to draw conclusions based on the minimum amount of information, and especially from the general context, it is quite capable of providing food for the mind. In particular, regarding the topic, questions on which have been heard at every such event for many years - relations between our country and Ukraine.


Little has been said, but enough for the clever, as they say.

First of all, it is worth noting that when answering a question about the prospects for a dialogue between Moscow and Kiev, as well as the settlement of the situation in Donbass, Vladimir Vladimirovich carefully avoided calling the president "non-existent" by his first name and patronymic, or at least last name. It seems to me alone that in the case of our leader, this, to put it mildly, is not the best sign? However, these are particulars. Putin made it quite concretely that he no longer has confidence in any of the representatives of the Ukrainian government, who, in his words, “come based on the confidence of the majority of voters”, which they receive “using the slogans of uniting the country”. The problem is that in reality something completely opposite happens next. Our president sees the reason for this "lack of courage", which makes the winners of the Ukrainian elections "look back at the nationalists." The issue of resolving the crisis in the East of Ukraine, according to Vladimir Vladimirovich, "depends on its power."

However, here's an interesting nuance: not completely, but only "in many ways." With this reservation, Putin either once again emphasizes political lack of independence of Kiev, or makes it clear that the local authorities will not be allowed to decide the fate of the inhabitants of Donbass on their own in any case. Moreover, the president expressed himself more directly on this score, stating that the Ukrainian politicians who are clearly following the path of rejecting the Minsk agreements "will not be able to reconsider anything unilaterally." Our president sums up the outcome of the Paris meeting in the "Normandy format" clearly and concretely "from what was agreed, nothing has been done or unlocked." Especially - "in terms of political settlement." Consequently, this "read between the lines" more than clearly, neither new meetings, nor new conversations are completely inappropriate.

It is high time to recall exactly how Vladimir Putin spoke about Zelensky a little over a year ago - after he was elected president of the "nezalezhnaya". For the first time, he spoke more or less in detail on this topic during the St. Petersburg International Economic Forum, which took place less than a month after this "epoch-making" event. It should be noted that even then Vladimir Vladimirovich, apparently, did not experience any special illusions about his newly-made "colleague." He characterized him, first of all, as a "talented actor", quite transparently hinting that the former comedian would need "completely different qualities, experience and knowledge" to lead the country than those that he has. At the same time, he added that the main indicator will be whether "the new head of state has enough courage to make decisions and take responsibility for their consequences." Then Putin explained that he was in no hurry to congratulate Zelensky on his election due to his "contradictory statements, in which Russia is still referred to as an enemy and aggressor."

However, the Russian leader expressed the hope that the new Ukrainian president "will determine what he wants to achieve." At the same time, Putin said that he "did not refuse contacts" with him, adding to this the sacramental: "wait and see." Lived. We saw ... In the very near future, the rhetoric of the Russian leader regarding Zelensky became noticeably harsher: he advised Zelensky "to understand that he is not in a comedy, but in a tragedy," and finally begin to fulfill his own election promises regarding the establishment of peace in Donbass ... Then there was the Paris summit - the first and last meeting of the two presidents. The one that, at this press conference, Putin, in fact, described as completely ineffectual.

From words to deeds

No matter how brief Vladimir Vladimirovich's speech on the "Ukrainian-Donbass" issue was, concrete conclusions can be drawn from it. The Kremlin has finally become disillusioned with the Ukrainian side, its negotiability, and, most importantly, the ability to really change something in the key issues that determine the agenda in relations between the two countries. For almost a year after the Paris meeting in the "Normandy format" Kiev managed to engage in imitation of violent activities to implement its decisions. However, when it became clear that no one was going to take the fooling around of the Ukrainian side at face value, one after another, extremely hostile and even somewhat threatening statements began to sound from the “non-profit”. It was "Kravchuk's plan", completely contrary to "Minsk" and, therefore, completely unacceptable neither for the DPR and LPR, nor for Russia. That statement by the same figure who began to demand that our country be “disconnected from SWIFT”. A real sensation was the revelations of the speaker of the Ukrainian delegation in the Minsk TKG, Oleksiy Arestovich, who openly admitted that "the policies of Poroshenko and Zelensky towards Donbass coincide almost completely." The Ukrainian presidential administration intends, in spite of everything that was agreed both in Minsk and in Paris, to demand an unconditional transfer of the border and the entry of a "UN peacekeeping contingent" into Donbas. Essentially, NATO troops.

Moreover, now Kiev, most likely, will be very active in seeking entry into the "Normandy format" also for the United States and Great Britain. That is, the transformation of this already, frankly, not very effective negotiating platform into a meeting of the most inveterate Russophobes. With a great deal of confidence, we can assume that our country will not take part in this kind of “get-togethers” under any circumstances, which will reduce their meaning and value to zero.

The “zeroing” of Zelensky and his “team” in the eyes of Moscow is caused not only by the above-mentioned points, but also by a number of others, which no less clearly and unequivocally indicate Ukraine's unwillingness to go along the path of a peaceful settlement of the conflict in Donbas and at least a relative normalization of relations with Russia ... The provocative maneuvers with the participation of foreign servicemen that did not stop all last year on the territory of the "non-railway", the increasingly concrete talks about the construction of military bases in the country for NATO countries (the same Britain) and the like, speak for themselves. Add to this the incessant Russophobic demarches of politicians and government officials at various levels and the legislative "delights" of Kiev, aimed at persecuting not only Russian citizens, but also its own Russian-speaking population.

As examples, we can mention the bill submitted by the Cabinet of Ministers to the local parliament on the "internment" of Russians who find themselves on Ukrainian territory, or the total ban on the use of the Russian language in any public sphere, from medicine to the service sector, which comes into force on January 16 next year. The unhealthy activity of the "non-profit" at the international level does not subside either - let me remind you that, for example, on April 30 of this year, the local Verkhovna Rada adopted the notorious Resolution No. 3068, in which it called on the "international community" to recognize Russia as an "aggressor country", to condemn it, and, most importantly, in no case should the previously imposed sanctions be lifted. By the way, every single MP from Zelensky's Servant of the People party who voted for this masterpiece of Russophobia was subsequently included in the expanded list of persons against whom our country imposed personal sanctions. Weak, of course, but at least something.

In truth, what is most intriguing in Putin's recent words is the passage that Russia intends to "continue to help Donbass", and "not only in the humanitarian field, but also through direct cooperation." Moreover, according to the president, "support will continue to grow." You know, the thesis of "direct cooperation" can be interpreted very, very broadly. Of course, only Vladimir Vladimirovich himself knows what exactly is meant by these words. We can only guess. What are the next steps to grant Russian citizenship in the DPR and LPR to everyone? Official cooperation of the Russian state with the local authorities, from which the recognition of the Republics themselves is a stone's throw? Something suggests that in this case the matter will not be limited to a couple of new humanitarian convoys. And here Kiev really has something to worry about.

By his speech at a press conference, Vladimir Putin made it clear that Moscow no longer intends to correlate its actions either with Ukraine itself or with the “world community” looming behind its back, giving more and more new carte blanches to the “non-profit” to drag out the peace process. settlement. Those who persistently continue unsuitable attempts to shift the blame for the civil war going on in the country since 2014 to Russia should heed the presidential answer to the question of an Air Force representative: “Yes, we are white and fluffy! In comparison with you ... ”By the way, the fact that Putin practically did not communicate with representatives of foreign media also testifies to a lot. Russia, it seems, is really ready to get rid of the humiliating and perhaps the most harmful habit in its entire history - to live with an eye to the West. Whatever they think and say about us, this, by and large, is their own business. The country does not withdraw into itself - it simply returns its self-esteem.

Incidentally, the representative of Ukraine, Roman Tsymbalyuk, who was present at the event, understood everything very correctly. In his express interview, published hot on the heels of the presidential press conference in one of the Ukrainian media, he said so: “Putin made it clear that all Zelensky’s initiatives on“ de-occupation ”have nothing to do with life ... Russians ready to negotiate with us only on concessions and surrender ... ”Well, it even came to that at last. Better later than never.
Ctrl Enter
Noticed oshЫbku Highlight text and press. Ctrl + Enter
We are
"We must beat first": the geopolitical alignment around Russia is continuously deteriorating
Ten "defeats" of Putin
Reporterin Yandex News
Read Reporterin Google News
17 comments
Information
Dear reader, to leave comments on the publication, you must sign in.