War without permission: changes in NATO pose a direct threat to the Russian Federation 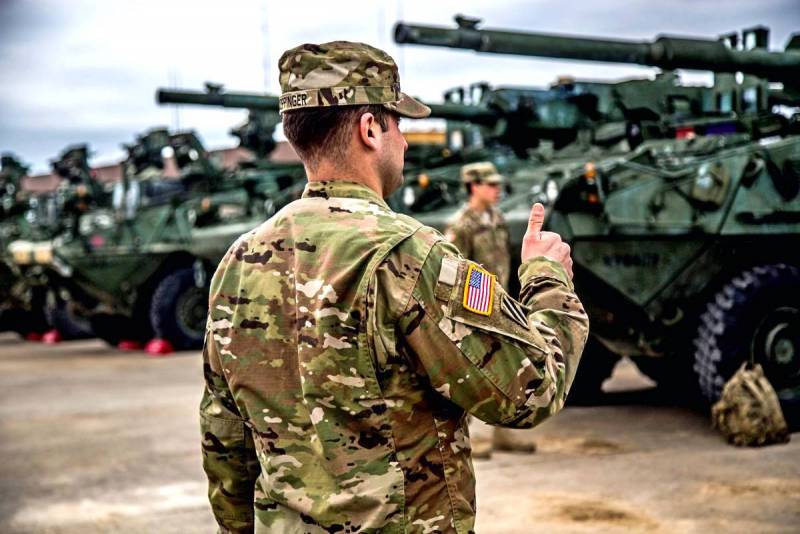 Not so long ago, the report "NATO-2030", prepared by order of the Secretary General of this military-political bloc, became public. For us, this document is interesting, first of all, because it is it, most likely, that will become the basis of the updated strategy of the North Atlantic Alliance, which will replace the current one, adopted in the distant and very different from the current times of 2010.


Without a doubt, the suggestions and recommendations made in this truly fundamental work will not necessarily be implemented. However, it is certainly worth analyzing them and, on this basis, trying to predict the possible lines of behavior of our potential adversary.

"Fading" Russia, which "nightmares" everyone

The starting point for creating a very voluminous (almost 70 pages) analytical review, containing in addition almost one and a half hundred recommendations, was the 2019 NATO leaders' summit held in London. It was then that the famous words of French President Emmanuel Macron about the "brain death" of the Alliance were heard, and the comrades-in-arms, who were deeply offended by the diagnosis made by Paris, gave Jens Stoltenberg an order: if you are General Secretary, please, prepare a clever and scientifically based concept of reforming the bloc. So that everyone does not call names ... The NATO chief approached the matter with all seriousness and attracted to him those whom he considered the best minds of our time.

The hand in the creation of the report, in particular, was put by the former head of the German Ministry of Internal Affairs Thomas de Mezieres, Aaron Mitchell - Assistant Secretary of State for European and Eurasian Affairs (albeit also a former one). Scientists, the military, policy, "Leading business representatives". Humanitarians, technocrats, bureaucrats from 30 countries of the North Atlantic Alliance - they all worked on the report for 8 months. Now this epoch-making work is finally completed and submitted to the judgment of both Stoltenberg himself and other leaders of the Alliance. The debate on this issue promises to be not too long - initially a new summit at the highest level, in the process of which the adoption of a new strategic concept of NATO should take place, was planned for the summer-autumn of next year. However, in light of the election of US President Joe Biden, signaling with all his might of the desire to "restore transatlantic unity", the leaders of the Alliance countries decided to forge the iron while hot and meet in the spring. And then to say - if you believe the authors of the report, the situation is urgent.

What, in their opinion, is the main threat to peace and stability in the world today? The old, fully exhausted bogey of "international terrorism" has been forgotten and thrown into the trash as completely unnecessary. Today, NATO is facing a "military and ideological threat" posed by "authoritarian states whose revisionist foreign policy programs force them to aggressively try to expand their own influence and power." Who are these clever guys talking about? Yes, about us, of course. And, of course, about China. At the same time, analysts of the North Atlantic Alliance see Russia as a country that "is clearly withering economically and demographically," but at the same time "is constantly showing a desire for territorial aggression." Earlier attempts to build some kind of "parity strategic relationship" with Moscow, according to the authors of the report, were a waste of time. Can you build with these Russians ?!

Further, as usual, the document contains a list of specific claims against our country: just imagine, it has the audacity to “build up military power in the regions of the Black and Baltic Seas” (is it okay that this is actually our territory?), And even “ conducts military operations near the borders of the Alliance "- here as an example ... the exercises" Kavkaz-2020 "are cited. No comment. Moreover, the Russians "are demonstrating a readiness to use chemical weapons on NATO territory" - this is, if anyone has not guessed, about Salisbury and the Skripals. And also "carry out aggression in non-traditional forms." No, no, not at all what you thought! This means "hacker attacks, interference in elections, support for extremism and separatism in Europe." In a word, a set of the most absurd and far-fetched Russophobic accusations. Against this background, the mention of "attacks on Ukraine and Georgia" looks like a complete lack of creativity.

Interestingly, in this report, China is mentioned in a slightly different context, although it is mentioned a little less often than Russia (90 times against 100). The Celestial Empire appears to the North Atlantic Alliance not as a military one (despite the "expansion of the military presence throughout the world and the development of weapons with a global reach" indicated in the text), but as an economic and ideological rival. The reason is simple - the West today simply cannot exist without China as a trading partner and the most important world production and technological center. The same Jens Stoltenberg is forced to admit that Beijing "is not an enemy of NATO."

However, he immediately clarifies: the desire of this country for leadership in certain areas and its efforts to “turn into a leading world technological superpower "are, of course, a" challenge to the technological advantage and security "of the North Atlantic Alliance and the entire" collective West ". Now, if China, as it once did, “knew its place” and was content with the role of a “world workshop”, providing the “civilized countries” with cheap labor and unobtrusive conditions for doing business, perhaps even "be friends". And if he would have renounced the "totalitarian communist ideology" - he would have accepted the "correct" natives, overshadowed by the radiance of "democratic values". But since Beijing stubbornly refuses to "take the right path", then it should be "contained" and "opposed to its expansionist policy." Incidentally, hopes for "peaceful coexistence" are also expressed regarding Russia. However, from NATO's point of view, it is possible only if Moscow "radically changes its behavior." Refusal to support the Republics of Donbass and the transfer of Crimea to Ukraine are cited as concrete markers of such changes.

That is, in essence - a complete and unconditional surrender not even to NATO itself, but to one of its most vile puppets. And there is no doubt that if these humiliating conditions are met, nothing will end there. The very next day the North Atlanticists will order the Russian peacekeepers to get out of Transnistria, Nagorno-Karabakh, Abkhazia and South Ossetia. And on the Ukrainian and Georgian borders at this time will already be standing, warming up the engines, tank columns, designed to "restore territorial integrity." By the way, as regards Tbilisi and Kiev, the prospects for them are very bright in the document we are discussing. The doors to NATO are opening wider and wider for them - in fact, the issue of joining the Alliance of Ukraine and Georgia is no longer even being discussed. The subject of "discussion at the highest level", as they believe, can only be a specific time frame and procedure for admitting these "invaluable" new members. This must be done, as the authors of the report emphasize, in spite of "the gross pressure that the Kremlin exerts on the Ukrainian and Georgian sides, deliberately blocking their path to the Alliance."

In principle, this passage alone is enough to fully immerse oneself in the intentions of those who today are laying the cornerstone of NATO's strategy for the next decade, at least. There is not even talk of any attempts at dialogue, reaching a consensus or a compromise mutually acceptable for Russia and the Alliance. They intend to “adequately contain our country with the use of the entire arsenal of both conventional and nuclear weapons,“ to resist its aggression in every possible way ”, enhancing the striking power of the Alliance on our Western borders. It is proposed that the sanctions "not only be extended, but strengthened in accordance with Moscow's behavior" - that is, ad infinitum ...

Unfortunately, this is not only about sanctions. For those who still doubt the true intentions of the military leadership of the Alliance, I will give just one specific and very eloquent example: as it became known recently from the official announcement of the Lithuanian Railways, the Rail Baltica highway currently under construction is being built, first of all, to ensure the transfer of military equipment NATO to the East. Let me remind you that a 950-kilometer railway "line" will connect Estonia, Latvia and Lithuania through Poland with Western Europe. So - the sites intended for loading and unloading heavy military equipment, each of which will be able to accept at least 3 trains with 300 units of equipment each, will be located in the districts of Kazlu Ruda, Kaunas terminal in Palemonas, Jonava and Panevezhes. Between them, it is planned to lay a whole network of highways - to provide the troops with even greater maneuverability. Today, the Alliance fighters are forced to unload from trains at the Polish border - at the terminal in Sestokai. Creating a completely new infrastructure will certainly make their task very much easier. I think it’s not worth explaining - which one?

Another very worrying innovation proposed in the report is the idea of ​​creating two entirely new mechanisms within the Alliance. Firstly, we are talking about a certain body that will allow making important decisions without long delays - literally within 24 hours. Why is this necessary at all? It's not a secret for anyone that a lot of contradictions and conflicts have accumulated within the bloc, which result in blocking by some of its members the initiatives of others. The same Turkey pretty much "spoiled the blood" of its own allies, defending its interests and vetoing plans to "protect Poland and the Baltic states from Russian aggression", or something else. Now they plan to raise the “threshold” of such opposition to the maximum, transferring the powers to resolve the most serious and urgent issues into the hands of the “top officials” of NATO and its member countries. But this is not the most unpleasant thing ...

The possibility of "creating temporary coalitions within the Alliance" is being seriously discussed, so that "allied countries can carry out urgent operations without waiting for universal approval." But this is already extremely dangerous for us! Let me explain with one more specific example: let's say, one of the Baltic countries saw a "hybrid aggression" on the part of Russia. It requires immediate "retaliatory actions," and of a military nature. Poland enthusiastically supports the idea. The United States is not at all opposed ... However, Germany and France are categorically opposed to such an adventure, absolutely not wanting a new European war. In the current conditions, the Baltic arsonists will have to shout enough to calm down. But what if NATO nevertheless takes the path of building "internal coalitions" with expanded powers? In this scenario, provoking an armed conflict on our western borders will be easier than ever.

As I have already said, it is not at all a fact that the ideas presented in the report will be fully implemented. NATO has yet to make a final choice. I would like to hope that it will not be done in favor of the war.
Ctrl Enter
Noticed oshЫbku Highlight text and press. Ctrl + Enter
We are
Ukraine from the inside: traitors, curators and those who watch from the Kremlin
Ten "defeats" of Putin
Reporterin Yandex News
Read Reporterin Google News
3 comments
Information
Dear reader, to leave comments on the publication, you must sign in.