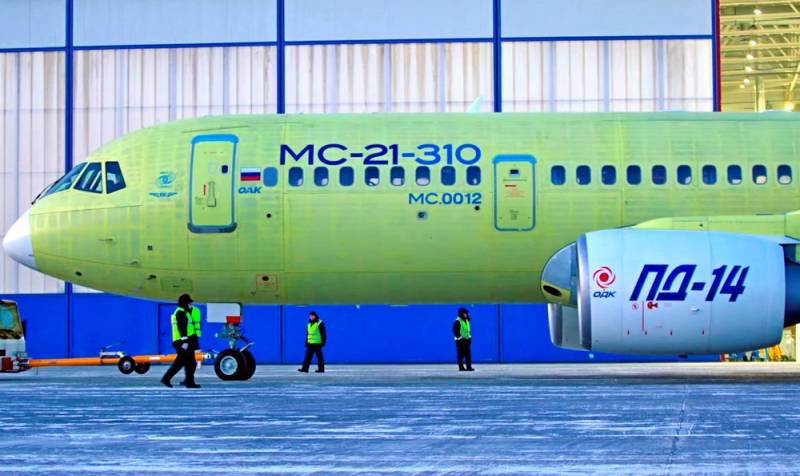 A very important event for the domestic civil aircraft industry took place the day before. The promising airliner MC-21 successfully completed its maiden flight with a Russian-made power plant.


The head of the state corporation "Rostec" Sergey Chemezov commented on the one and a half hour flight of a promising medium-haul liner as follows:

This flight is the result of the unification of two most important programs of the civil aircraft industry in Russia - the MS-21 aircraft and the PD-14 engine. Through the efforts of scientists, designers, engineers, workers, a new generation airliner is being created, which returns our country to the top league of world aviation.
This is really a big step towards the revival of the civil aircraft industry in Russia. After the termination of production and operation of the Tu-154, our skies almost completely belong to the American Boeing and the European Airbus. Earlier, a stake was placed on international cooperation, but on the example of the short-haul Superjet liner it turned out that it was fundamentally wrong. The aircraft turned out to be almost entirely assembled from imported components, in particular, 20% from American ones. This gave rise to the US Treasury Department to ban the sale of Russian aircraft to Iran. Another critical issue was the dependence on engines developed jointly with the French. For some reason, it is in the details of European production that defects are constantly revealed, caused by constructive miscalculations, which is why the Superjets stand more on the ground waiting for spare parts for repair than they fly.

Dependence on foreign partners also negatively affected the project of the MC-21 medium-haul liner. However, his prospects look much better. The aircraft from the very beginning was designed for two different engines at once: the American Pratt & Whitney PW1000G and the Russian PD-14. With a power plant from the United States, the liner was tested back in 2017, the intrigue was whether the domestic one would be ready. Good news is that JSC "UEC-Aviadvigatel" coped with its task. The certification tests were completed in 2018. Currently, the Russian aircraft engine is being certified in accordance with European standards.

PD-14 has a future, it is expected that it will conquer at least 10% of the domestic market of turbofan engines in the 7-18 ton thrust class. Its more powerful version PD-18R can also be installed on Tu-214, Il-96-300 and Il-96-400T aircraft. The big advantage of this power plant is that it was originally designed with the main focus on Russian materials and Technology... The percentage of foreign components in it was relatively small, so the sanctions created some inconvenience, but could not have a critical impact on its production. This means that the MC-21 has its own "heart", we do not depend on anyone in this matter of principle.


The second problem that stood in the way of the medium-haul liner was the widespread use of imported composite materials in its wings and keel. American sanctions banned the supply of composites from Japan and the United States, which shifted the project launch date to the right. We had to urgently look for domestic producers who could substitute import for them. At present, tests are underway for "black wings" made of Russian-made composite materials. Their completion and certification are expected by the end of 2021. The first commercial flights could begin as early as 2022.

However, there is another problem with reliance on imported technology for electronics. Recall that foreign manufacturers made it clear that they would not be able to fulfill their contractual obligations for supplies to our country, about which we are in detail told earlier. These restrictions will apply to both the MS-21 and the Superjet. At the moment, Rostec has a large stock of components that the corporation was able to purchase for future use, but they will never be enough. Import substitution is needed not only for composites, but also for aircraft electronic equipment. To complicate this difficult task, new American sanctions were introduced against the Chinese and Russian aircraft industries, which will affect, in particular, such enterprises as Elekon Plant and Aviazapchast.

Obviously, Russia needs to focus on rebuilding its electronic component base. Then the MC-21 will fly as it should, and the Superjet will get its second life. Let's hope that this task will also be solved in a timely manner.
Reporterin Yandex News
Reporterin Yandex Zen
4 comments
Information
Dear reader, to leave comments on the publication, you must sign in.