Humiliation by Navalny: it's time for Moscow to respond to accusations of poisoning a blogger 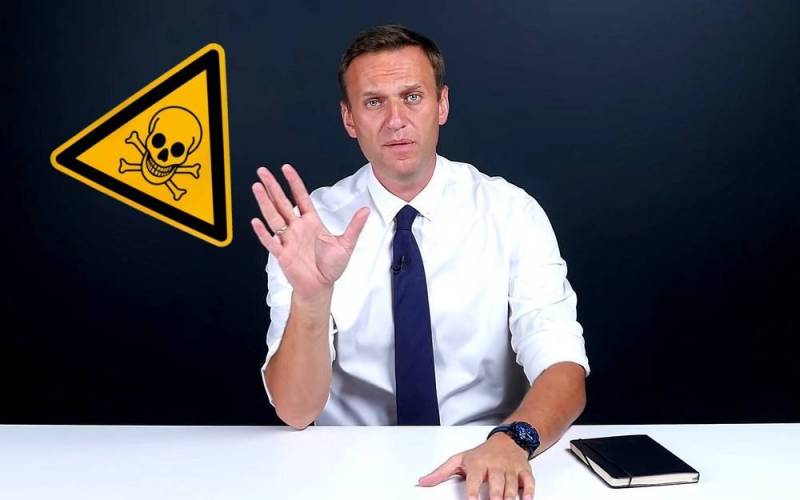 The fact that in recent days the scandal with the "poisoning" of blogger Alexei Navalny, which initially looked like a bad joke, has played with new bright colors, gives rise to a lot of thought.


For example, to be amazed at the degree of absurdity and shamelessness our Western "friends" are capable of reaching in their attempts to denigrate Russia at any cost and create a new "evil empire" out of it. And also - to reflect on what specific goal is pursued by the increasingly wretched and ridiculous innuendo addressed to our country. Well, and, in the end, ask the question: how long will Moscow tolerate this humiliation and how long can it “endure”?

So much the worse for the facts ...

It is useless to debate with the authors of yet another "stunning investigation" - Bellingcat, The Insider and Der Spiegel, which this time "for greater solidity" has also joined CNN. One of the fundamental truths of psychiatry is the position that any person with serious disabilities who tells others incredibly delusional things can be very convincing. This happens because all the constructions of his sick mind are logical and justified. Everything, except for the very first, initial ... It is in it that the grain of madness lies, and the rest is the particulars that should not be misleading. Approximately the same is happening with Western and domestic “investigators” who have lost their minds on the basis of “Russian poisoners” and “Putin's atrocities”. Based on the initially insane theory, they heap mountains of "facts" and evidence "on it in the form of a multitude of surnames, addresses, geolocations, supposedly" reinforced concrete "(though completely unverifiable by the audience to whom this is all addressed) data from some "Bases" ...

In the same place where their cheating "revelations" come into sharp contradiction with the elementary realities of life, where listeners and interlocutors begin to ask "childish" questions to which, in fact, there is nothing to answer, they immediately assume an offended posture: "How do we know? ! " Well, yes - "I am an artist, as I see it." The facts do not fit into the version? So much the worse for the facts! And those who stubbornly try to cling to them ... There are so many screaming, completely ridiculous inconsistencies and absurd moments in the "investigation materials" that one listing of them will "pull" a whole article. Well, since it comes to that, here are a few of the most egregious.

Why "the most deadly military war agent in the world" "Novichok" did not kill Navalny either with two or three attempts? Why did the "poisoners" allow things with traces of poison to be taken out of the room in Tomsk, which later turned into "irrefutable evidence"? Why did the authorities of our country allow the “poisoned” to be taken to Germany (if, following the delusional theory, they were well aware that the fact of the use of poison would be revealed there)? Why are the citizens listed in the "investigation", declared by its authors "staff members of the special services" and "aces of chemical warfare", behave like, excuse me, helpless idiots? Why are they poking around, knocking around, darting from side to side, leaving behind many traces and, most importantly, failing to fulfill the task of elimination assigned to them?

Do you know, by the way, how Roman Dobrokhotov, editor-in-chief of The Insider, answered this very question in a recent interview? "There can be no effective special services in Russia because it does not even have a normal car industry ..." And you propose to argue with THIS ?! But we did not even touch on the main questions: why was it necessary to eliminate Navalny at all, and why it was necessary to do it without fail with the help of the “Novichok” turned into a bogey by the West, if there are many other, much more reliable and reliable ways to get rid of a person? Please, the only acceptable counterargument in this case is Dmitry Peskov's biting bullshit. In the West, some media outlets are now gloating about the "silence of the Kremlin in response to the accusations." They say that they even "canceled several press conferences." Well, first of all, it is far from certain that it was precisely because of the new round of the scandal with Navalny. But even so, they did the right thing, you know. Why create extra conditions for information provocations, which, there is no doubt, will follow more than once?

Goals are clear, deadlines are set

Why did it "explode" right now? The reasons are so obvious that it's not even interesting. First of all, the desire to turn the traditional big press conference of Vladimir Putin, scheduled for December 17, into a field for the provocations I have mentioned. Indeed, why give the domestic leader the opportunity to talk about overcoming the coronavirus pandemic (much more successful than in most Western countries), developing a vaccine against this disease (which our country was one of the first in the world to implement), and the like? Let's reduce everything to Novichok and Navalny! Not the least role, by the way, in choosing the moment for the publication of the "investigation" was played by the desire of the forces behind them to spoil the professional holiday, December 20, for the FSB officers. Yes, Western colleagues have begun to sink to completely disgusting things ... By the way, the main proof that the entire "journalistic investigation", in fact, is nothing more than another episode of Bellingcat and the company’s work at quite certain “offices” , was published not by TASS, but by The New York Times. In the publication of this particular edition (with reference to a certain "high-ranking officer of the German special services") it is quite openly stated that "representatives of the American CIA and British intelligence services passed on to their German colleagues information about the poisoning, including about the identities of FSB officers who participated in the operation. ". Moreover, this happened almost at the moment when the landing gear of the plane with the "oppositionist" touched German soil.

Agree, such a turn makes a big difference. In fact, fundamentally. This is an admission that the journalists did not calculate any "secret poisoners" (of course, they could not). The CIA and MI-6 simply "leaked" them the corresponding list of names, and the task of the "investigators" was only to "adjust the problem to the answer" and create a more or less acceptable fictional frame. A fool would have done it.

Naturally, on New Year's Eve the nerves of our president, to spoil him and his colleagues with "Chekist's Day" are tasks, so to speak, of a tactical level, and nothing more. At the strategic level, everything is much larger. The new burst of slanderous activity in the "poisoning of Navalny", in fact, gave an absolutely clear and unambiguous start to the process of preparing a "color revolution" in Russia. To tell the truth, nobody even tries to hide this. The same Dobrokhotov absolutely openly declares: the purpose of the launched information attack is not the "sanctions-shamings of the West" (literal quote), but a "tough reaction" on the part of "mentally healthy inhabitants", which must certainly result in something during the elections ... Here it is - the cornerstone!

To understand the essence of the issue, let us turn again to open publications in the leading American media. The Washington Post writes very specifically that the parliamentary elections in Russia, to be held on September 19, 2021, "will become a foreign policy test for the West, and, above all, the United States." What, in fact, are we talking about? What do they care about our elections? WP explains this point with disarming simplicity - it turns out that the results of the will of the Russians will certainly be "falsified by the will of Putin." And he immediately reminds that "in recent years, in the countries neighboring Russia - from Serbia to Georgia and Ukraine, it was precisely the falsification of ballots that led to mass protests." Here it is, so how ... Now we know for sure - the first "Maidan" in our country, tentatively, was appointed by Washington on September 20, 2021. What is Navalny's role here? Yes, it is more than obvious - taking into account the fact that the publication I cite mentions the call of this figure “not to recognize the results of the parliamentary elections” if “opposition deputies” do not win. But they won't win!

Having made absurd accusations against Russian President Vladimir Putin, announcing him as the initiator and customer of his own "poisonings", Alexei Navalny crossed a very specific line. He, of course, sees himself now as Caesar, who has crossed the Rubicon and is moving towards triumph. The grief "oppositionist" imagines himself to be the future "banner of protest" and the leader of the "revolution". At the same time, he does not understand that due to the specific specifics of the hype created around him, the West is much more interesting and beneficial to the dead than to the living. By agreeing to play the role assigned to him, the “fighter against corruption” will no longer be able to get out of the role of “victim” defined for him and, most likely, he will have to play it out, pardon the “black” pun, to the end ... However, these are the problems of Mr. Navalny and his family.

For us, the question of what Russia should do in the face of the newly emerging bacchanalia of accusations and slander remains relevant. Write it off to bullshit and not react at all? The option is tempting, but hardly feasible. Too serious forces in the game, too ambitious goals are set and resources are used. They won't. It is clear that making excuses and trying to prove the absurdity of slander is completely useless. Thank God, even though the Kremlin seems to have understood this.

Most likely, the domestic leadership should act mainly in two main directions - on the one hand, prepare to resist the most serious (most likely, the most ambitious) attempt to destabilize the internal political situation in Russia, arrange a “color revolution” in our house according to all the rules. On the other hand, it is necessary, in the end, to develop and begin to apply an effective and, as far as possible, the most tough complex of retaliatory actions against any structures, individuals and even entire states that organize and support such Russophobic demarches. Without this - nothing. Otherwise, the theater of the absurd with "poisoning" and the like will continue indefinitely.
Reporterin Yandex News
Reporterin Yandex Zen
33 comments
Information
Dear reader, to leave comments on the publication, you must sign in.