Alliance of Kiev and Chisinau: Will the West Dare to Raise the Stakes in Transnistria? 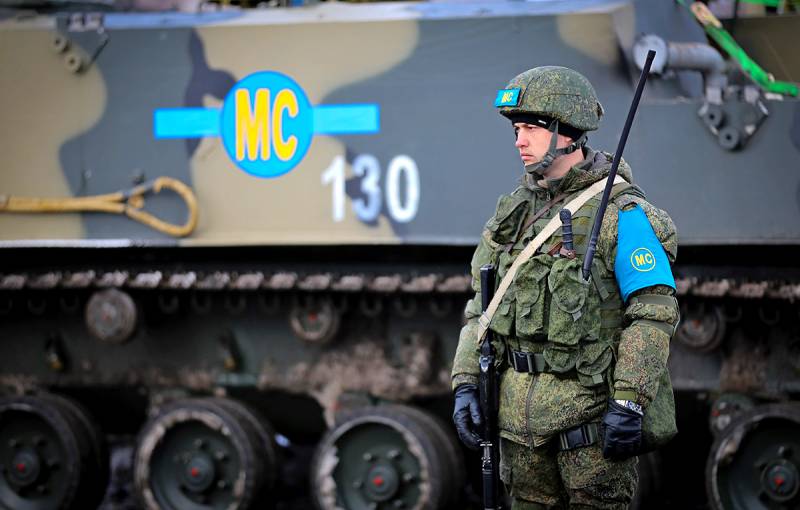 To everyone who follows political the news in the post-Soviet space, it was immediately clear that after coming to power, Maia Sandu would immediately start talking about the need to withdraw Russian peacekeepers from Transnistria. Since this topic was raised even by the "pro-Moscow" Dodon, then a representative of the European integration camp would be completely ashamed to start her presidency with other statements.


It would seem, and let him declare his health, because the caravan, meanwhile, calmly continues its movement. But the current political situation in the near abroad leaves no reason for such complacency: we received too many difficulties from this side in the outgoing year. And Transnistria will almost certainly become another problem point.

It is worth paying attention to one interesting fact. During a recent visit to Chisinau to the newly elected President of Moldova, Ukrainian Foreign Minister Dmitry Kuleba met with his colleague from this sunny country named Aureli Ciocay. And not casually, he said that Moldova and Ukraine would jointly demand the withdrawal of Russian troops from Transnistria.

There is no doubt that they were not referring to the army units that guard the largest artillery depots in Europe with still Soviet shells, which could not be removed from the territory of the unrecognized republic. Russia's influence in the region is associated with the presence of our peacekeepers here, and it is unlikely that Kuleba meant anyone else by "Russian troops."

But the danger here lies not in joint statements, but in the very fact of the rapprochement of the two post-Soviet states, since such potential allies can give us a lot of problems for a couple.

What threatens the alliance of Kiev and Chisinau

Considering the fact that powerful crisis situations in three states friendly to Russia in 2020 can hardly be considered a coincidence, it can be assumed that the initiators of these processes are unlikely to think of stopping at what has already been achieved. Moreover, it will be much more difficult for us to act in Transnistria if it comes to the escalation of the conflict with Chisinau.

After all, if everything goes exactly in this direction, then who or what will prevent Sand and Zelensky from agreeing on a joint blockade of the unrecognized republic in order to restore the territorial integrity of Moldova? An outraged international community? In Kiev, Moldovans will understand. "From us, Putin took the Crimea and Donbass away from us."

If so, we will have to figure it out, since Transnistria is full of Russian citizens. But it will be necessary to act in the absence of a common border and huge distances at which Ukraine, which is extremely unfriendly to us, is located, and which will need to be overcome somehow. To agree on the provision of a corridor for the advancement of troops and military cargo with Kiev is, as they say in Odessa, "it's funny to say, not something to think about."

Passing the PMR will not work even if Moscow strongly wants it. Since such a step will become the collapse of our entire foreign policy, and after that it will be possible to safely reel in Syria, Libya, in the same Karabakh and many other places. They will simply stop taking us seriously. Yes, and respect for power from the people, so not very high, will return to the days of Yeltsin.

Therefore, in the case of a blockade, there will be only one way out. We'll have to somehow break through this blockade. And, most likely, not by diplomatic means, as mentioned above.

Of course, making unambiguous predictions of the further development of the situation would be the height of stupidity, and time may not confirm such gloomy predictions. But the realities, alas, do not add optimism. Because so far everything is going according to the schemes set out by the specialists of RAND, a corporation that advises the US government in general and the Pentagon, and related organizations in particular, on strategic issues.

In 2019, RAND published a report entitled “Extending Russia: Competing from Advantageous Ground”, which can be translated as “Holding Russia back: Competition from an advantageous position”. Its original, as well as the translation into Russian, can be easily found on the vastness of the World Wide Web. The purpose of the report is to assess the ways to "overextend" Russia, forcing it to spend resources not on development, but on solving problems so that our country ceases to pose a threat to US interests. It is noted that at one time it was possible to do this with respect to the USSR, and RAND specialists rely in their report on this experience as the most successful one. Well, they're right.

In the report itself, the most effective containment options in terms of the ratio of the chances of success, the benefits obtained and the resources spent are called economic methods of influence. But in the section on geopolitics, Belarus, Transcaucasia and Central Asia appear as possible points of pressure on Russia. And, of course, Transnistria. Coincidence again?

Reading the report and comparing it with reality, let's not forget that this is just the analytical work of invited consultants who do not have such resources and such awareness of the state of affairs in the world as the Pentagon and the CIA. And, judging by what is happening, the authorities in Washington have drawn somewhat different conclusions than the specialists from RAND. Say, not a single economy ...

The fact that Kiev and Chisinau have demonstrated their solidarity towards the problem of Transnistria may also mean joint actions to resolve it. Moreover, Moldova and Ukraine are close to each other ideologically. Both countries aspire to the European Union and have nothing against joining NATO, but they treat Russia ... In general, everything is clear. It is also clear that despite the similarity of the foreign policy positions of the two countries, their common position is not the fruit of the joint efforts of Sandu and Zelensky. It was sanctioned by the overlord.

It is also clear that in the event of an aggravation of the situation around the PMR, the Kremlin will strive to avoid a military scenario by all possible means, but it may also happen that there will be no other way out but to conduct another “peace enforcement operation”. This was the case with Georgia. But this operation will not be so fast. And then you don't need to have a wild imagination to imagine the hysteria that will rise in the West. And the case, presumably, will not end with only accusatory attacks against us. They will quickly move from words to specifics. Fortunately, there is where to turn around.

Despite all the jingoistic patriotic reports describing Russia's success in modernizing the army, we still have many unresolved problems in defense, especially at sea. Therefore, in the hands of the fleets of the United States and allies, which have an overwhelming superiority in forces, there is a very rich toolkit in order to not get involved in a large-scale conflict and cause us very serious problems. For example, by arranging a naval blockade on distant approaches, turning around all ships that go both to us and from us.

The overlap of the Black Sea straits is hardly relevant in this regard - the Turks are too offended by Washington, but in the Norwegian Sea and the Far East, it will not be so difficult to do so. Busy with showdowns in Transnistria, can we adequately respond to such a step of our "dear partners"? Unlikely. And then it will quickly become clear to everyone how far from reality are the statements that Russia is a land power, not heavily dependent on shipping.

However, this is not the only and, perhaps, not the most likely scenario for the development of events. Most likely, even if they try to return Pridnestrovie to Moldova by force, and we cannot avoid military intervention, the West will not dare to raise the stakes this way - the risks of losing control over the situation are too great. But there is absolutely no doubt that the coming years, especially after Biden came to power, will not promise us a calm and peaceful development. They will try to "overextend" Russia wherever possible.
Reporterin Yandex News
Reporterin Yandex Zen
26 comments
Information
Dear reader, to leave comments on the publication, you must sign in.