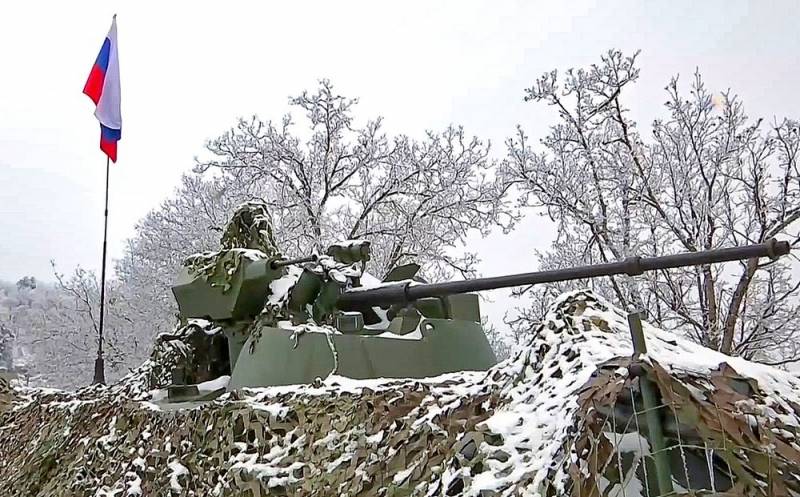 Despite the formal end of the war, they shoot and kill again in Nagorno-Karabakh. The Russian peacekeepers had to stand between the Azerbaijanis and the Armenians, who will definitely not succeed in a quiet business trip. Should there be peace on the territory of this unrecognized republic, or is a ceasefire agreement just a temporary calm before a new war?


Looking at the map of delineation of the opposing forces in Karabakh, one would like to quote the French Marshal Ferdinand Foch regarding the conditions of the Versailles Peace, which ended the First World War:

This is not peace, this is a truce for 20 years!
And it's not a fact that the resumption of hostilities will have to wait two decades. The ceasefire agreement of November 9, 2020 contains a fundamental contradiction, which will certainly “shoot”. The territories that were part of the NKAO back in the Soviet period, "sort of" should remain with the Armenians. However, the offensive of the Azerbaijani troops was stopped during the period of their maximum success, therefore, at the time of its termination on November 10, parts of the Hadrut, Martuni and Mardakert regions, previously belonging to the Nagorno-Karabakh Autonomous Republic, remained in Baku. And the Azerbaijani military are not going to go anywhere, on the contrary, they began to actively "cut" the Armenian exclaves in their favor. As the victor, they began to clean up the remaining in the rear of the village and the positions of the Karabakh army, which did not go anywhere, despite the capitulation of Yerevan, and put up armed resistance. Blood was shed from both sides, and Russian peacekeepers had to intervene.

Fortunately, they did not have to use weapons, but for how long? In accordance with the trilateral agreements, it seems that Baku should not clean this territory by force, but from the point of view of international law, this is Azerbaijani land. Therefore, strictly speaking, President Aliyev's actions are limited only by his good will. And the brigade of Russian peacekeepers, which is there only with the consent of official Baku and can be supplied only with the permission of the surrounding countries. The position, frankly, is not the best. The most interesting thing is that, in the eyes of the Armenian side, peacekeepers from Russia have already managed to become guilty of being “late” to the disengagement line, which Prime Minister Nikol Pashinyan commented very unhappily:

What is the reason for the delay - the fact that the peacekeepers were not there at the time of the attack? This is a matter of separate discussion, careful analysis, but at the moment the most important thing is that the peacekeepers entered the area with quite significant forces, which should exclude the further advance of Azerbaijani troops.
Our military is in a very difficult and ambiguous position. On the one hand, they must ensure the preservation of the status quo, but their presence in Nagorno-Karabakh depends not on international agreements through the UN, but on Baku itself. President Aliyev may ask them to leave after five years. On the other hand, with the help of one brigade, they cannot ensure real control over the remote mountainous regions, as well as stop the advance of the Azerbaijani army if it decides to take the remaining territories from the Armenians. So far, Baku is playing friendship with Moscow, but what happens if "friend Recep" asks his junior partner to launch a new offensive in Nagorno-Karabakh, and the Azerbaijani military stops being polite with ours?

You need to be very naive people not to realize that such plans are obviously hatched and worked out. So far, the time has not come for them, but there was also a respite between the First and Second World Wars. And what will happen to our peacekeepers in Karabakh if ​​the Azerbaijanis and Turks stop being almond-shaped with them, and they find themselves there between a rock and a hard place? In fact, they are hostages of President Erdogan's foreign policy ambitions. If Russia is not able to keep and supply a large military contingent there on a permanent basis, and is already to blame before the Armenians, then maybe then it is worth minimizing the format of our peacekeeping mission, limiting itself to observers?
Reporterin Yandex News
Reporterin Yandex Zen
7 comments
Information
Dear reader, to leave comments on the publication, you must sign in.