"Artificial Sun": what prospects opens up for Russia the most powerful laser in the world 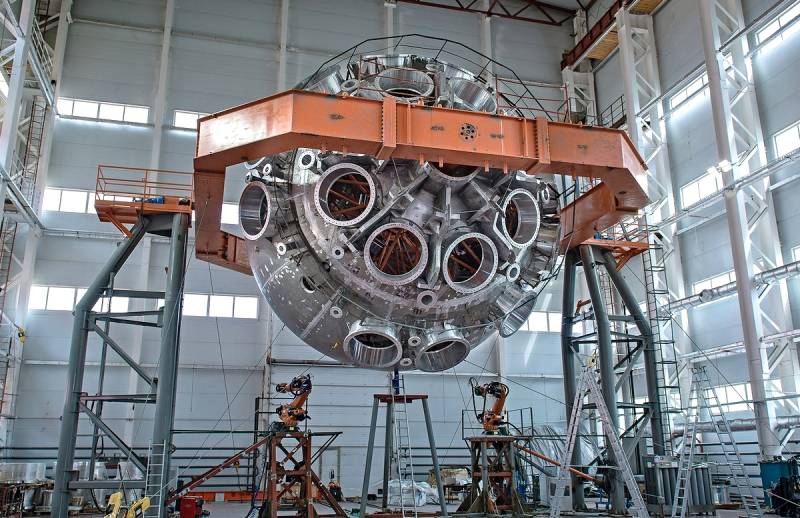 Russia has only two loyal allies - its army and navy. It probably makes sense to name the third, science. Thanks to the Soviet legacy and modern developments, our nuclear scientists help to ensure the safety of the country's nuclear shield, as well as to provide it with the most advanced technology in the field of peaceful energy.


Without exaggeration, Russia is still among the world leaders in the field of nuclear energy. It is very likely that our scientists will be the first to master controlled thermonuclear fusion, which differs from traditional nuclear power in that it uses a decay reaction. Deuterium (2H) and tritium (3H) will be used as fuel for thermonuclear reactors of the future, and in the future - helium-3 (3He) and boron-11 (11B). In terms of possible radiation risks, such reactors are much safer. It is estimated that in the event of emergency emissions, it is not even necessary to evacuate the population in the vicinity of the power plant.

Work in this direction is being carried out not only in Russia, but also in Europe and the United States. The European project is called ITER (International Thermonuclear Experimental Reactor), many states participate in it, including Russia, but France is objectively playing the first violin in it. ITER has been under construction for twenty years now, and the launch dates are constantly moving to the right, and its cost has increased from $ 12 billion to $ 19 billion.

Rosatom participates in the project by supplying high-tech equipment of its own production: plasma heating devices, superconducting magnets, etc. The Europeans are approaching controlled thermonuclear fusion by trying to keep the plasma in a powerful magnetic field. So far, researchers have not been able to achieve a reaction lasting longer than a few seconds that produces more energy than it consumes.

The second way, which involves the creation of super-powerful energy in a limited space using a laser, is the United States and Russia. The deuterium-tritium mixture is placed in a capsule, where it is treated with laser beams from all sides, resulting in the formation of helium nuclei and high-energy neutrons. That is, a tiny analogue of a celestial body is actually artificially formed. The Americans are trying to create their own stars at the National Ignition Facility (NIF) - "National Ignition Equipment" at Lawrence Livermore Laboratory. Despite the fact that they light up, they still stubbornly refuse to "burn". However, US researchers are still optimistic.

Their Russian counterparts have a better chance of success. A few days ago it was reported that in the famous city of Sarov, scientists from RFNC-VNIIEF launched the most powerful laser at the moment, called UFL-2M, which will be used in research on controlled thermonuclear fusion. The domestic installation is one and a half times more powerful than the vaunted American one, its cost amounted to a very impressive 45 billion rubles. The amount is decent, but they did not spare this money, and they did the right thing. The output will be a dual-use technology.

First, its presence will allow testing new types of nuclear weapons bypassing the existing international legal restrictions on field ones. Secondly, it is Russian nuclear physicists who have the most realistic chances to successfully create and test a highly efficient and safe technology of controlled thermonuclear reaction, which will allow our country to maintain its position in the rapidly changing global energy obsessed with "greenness".
Reporterin Yandex News
Reporterin Yandex Zen
1 comment
Information
Dear reader, to leave comments on the publication, you must sign in.