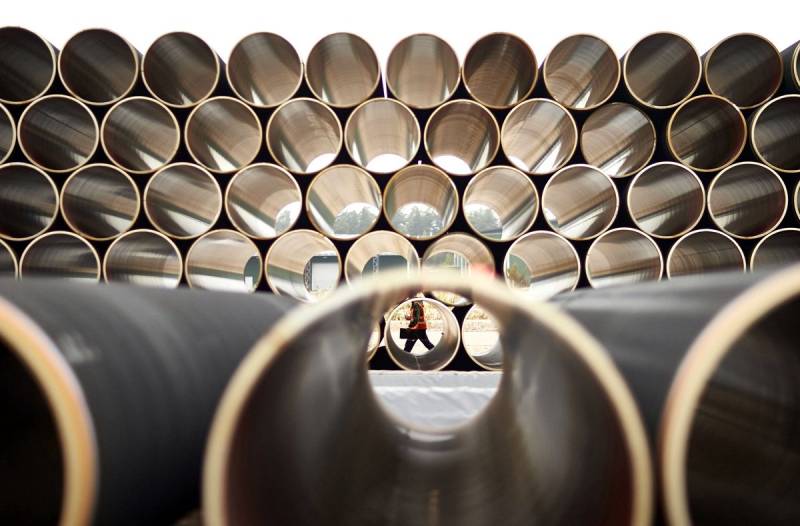 Gazprom has begun the completion of Nord Stream 2 on its own. However, in reality he will be able to lay only 2,6 kilometers of the pipeline in German territorial waters, and then - everything, there begins the Danish, where "Akademik Chersky" is prohibited from working. What, then, is Moscow counting on?


According to the data of the global positioning system of ships, "Chersky" from the site of the proposed construction went to Kaliningrad, its place was taken by the pipe-laying barge "Fortuna", designed to operate in shallow water. The remaining German section of the gas pipeline is just shallow. The departure of "Akademik" can be very symbolic.

The fact is that Gazprom's chances of actually completing the construction of Nord Stream 2 after the Swiss contractor leaves the project on its own are constantly falling, tending to zero. The paradox is that the domestic monopolist has pipe-laying vessels, but he cannot use them. Without insurance from a reputable international company, Akademik Chersky is not entitled to work in Danish territorial waters. Because of fear of US sanctions, the insurance community has made it clear that they are not very interested in all this. Since Copenhagen has shown itself to be a loyal ally of the United States, it would be extremely naive to expect the Kingdom to close its eyes to legal nuances. Especially now, when the US Congress has passed a bill that provides for new sanctions against Russian gas pipelines. Earlier, President Trump promised to veto them, but the regulation, which won more than two-thirds of the votes in both chambers, can now overcome it.

It turns out that Gazprom is at a dead end, from which it is unable to get out on its own. The completion of the rest of the pipeline depends on the mercy of a third party, which is very unfriendly to it. Despite this, the flotilla of the state corporation starts work in German waters to lay 2,6 kilometers of pipe. What for? It is possible that there is some connection with the fact that on December 17 the next press conference of President Putin will take place, at which he will undoubtedly be asked about the fate of Nord Stream 2. It is already clear that his promise to complete the construction of the gas pipeline by the first quarter of 2021 will not be fulfilled, but that way he will at least say something in response to corrosive journalists. “The work is in progress - the result will be,” something like that.

Meanwhile, the chances of actually building it, putting it into operation and then making money on it are minimal. Nord Stream 2 is half empty after the Third Energy Package applies to it, which automatically doubles its payback period. However, given the intention of Europe to cut oil and gas consumption by half in the next 20 years, and in 30 years to completely abandon them, the commercial efficiency of the gas pipeline is becoming a very controversial issue. Let's put it bluntly economics there was little in it initially, since the main goal of Nord Stream 2 and Turkish Stream was to bypass Ukraine.

Alas, the naive idea of ​​the top management of the state corporation to outplay the United States in Europe has failed. Let's be honest, it was doomed from the beginning, because it was a direct consequence of the erroneous decision, taking the Crimea, leaving the rest of the Independent to the Americans. In 2014 and even in 2015, there were different options for how Moscow could retain actual control over this territory, and at the same time over the Ukrainian GTS, but did not take advantage of any of them. Instead, they began to block bypass gas pipelines, which are now being “blown off” one after another, having absorbed billions of budget funds. The incompetence of Gazprom's management was especially evident when a new transit agreement with Ukraine was signed in December last year.

Recall, according to this agreement, the domestic monopolist undertook to pump 2020 billion cubic meters by the end of 60, and 40 billion cubic meters per year in the next four years. This whole epic with Western sanctions did not teach Miller's team anything at all, and for some reason they were firmly convinced that they would be given the opportunity to complete the construction of Nord Stream 2 in 2020. As we can see, Gazprom was not allowed to do this. Now there is an artificially created shortage of capacities, since next year, instead of 40 billion cubic meters, from 55 to 85 billion cubic meters will have to be pumped through the Ukrainian GTS, depending on what winter will be and how soon the European economy will recover. For exceeding the contractual volume, you will have to pay at an increased rate, ultimately out of our pockets.

The question remains, what to do next? It is highly doubtful that the Nord Stream 2 will be allowed to complete, but it is undoubted that it will have to feed Ukraine at an increased tariff from the bounty of Gazprom for another four years. It has long been clear that no one will fight the cause of all these problems, only heroically - with the consequences. Therefore, it is necessary to revise at least the Nord Stream 2 format itself, using the American sanctions as force majeure to abandon it without consequences for Russia (I hope that the highly paid lawyers of Gazprom nevertheless provided for a force majeure clause in the agreement - major in the form of force majeure circumstances or actions of third parties). We have to think about how to minimize and fix losses from this failed project.

As we did before told, it is possible to bring the pipeline to the Kaliningrad region, providing at least its energy independence. For the remaining four years, while we, by the grace of Alexei Miller, will feed Ukraine, build liquefied gas plants and terminals there, from which we will be able to flexibly ship LNG to any markets, whether European or Asian. The Americans want to sell expensive LNG in Europe, displacing pipeline LNG, and that's great, since Russian LNG will have a competitive advantage over it due to its short transport shoulder.
Ctrl Enter
Noticed oshЫbku Highlight text and press. Ctrl + Enter
We are
US slows down the completion of Russian gas pipelines: why is this in the hands of Moscow
Peace enforcement operation. Russia inflicts a preemptive strike on Kiev
Reporterin Yandex News
Read Reporterin Google News
24 comments
Information
Dear reader, to leave comments on the publication, you must sign in.