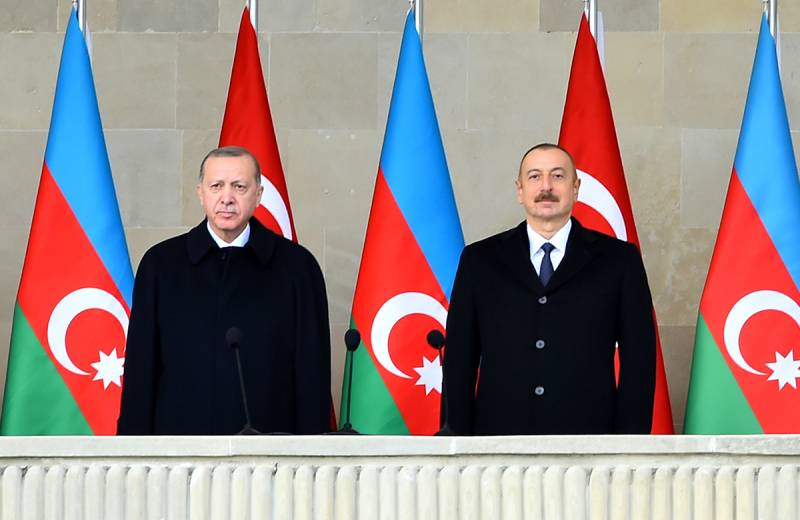 The day before, Baku hosted a solemn celebration of the joint victory of the Azerbaijani and Turkish military over Armenia and the return of control over key regions of Nagorno-Karabakh. President Aliyev became a real triumphant who fulfilled the quarter-century dream of his people to return the "temporarily occupied territories", and the 44-day war was called the Great Patriotic War. In addition, a number of promising forward-looking statements were made. Alarming.


We must give Baku its due. For many years Azerbaijanis have been systematically preparing revenge in Nagorno-Karabakh: they trained their army, bought the most modern weapons for petrodollars, attracted military experts from Turkey, who received real combat experience of using shock UAVs in Syria and Libya, to plan the operation. It was Turkish drones with Israeli roots, which made it possible to ensure air domination and destroy a huge number of Armenian equipment, today are considered the weapon of victory. While the Pashinyan regime rested on the laurels of the fathers in Yerevan, unreasonably counting on throwing hats at a dangerous enemy, Baku seriously prepared and won in less than a month and a half. Therefore, the military triumph of Presidents Aliyev and Erdogan is completely justified.

Russia reacted to this event with another "tomato attack", which clearly indicates an underestimation of what happened. And there is something to think about.

At first, dizziness from success will inevitably cause an increase in nationalist sentiments in Azerbaijan, which will have both anti-Armenian and, quite possibly, Russophobic tinges. Moscow is a military ally of Yerevan in the CSTO, but did not intervene in the conflict, and then endured the destruction of its Mi-24 combat helicopter. Yes, experts can justify excuses for non-interference with reference to international treaties and so on, but try to convincingly explain this to some watermelon dealer. Let's just say that at the everyday level, in such a position of the Kremlin, few people will see the manifestation of force, but what else is needed to feed nationalism? By the way, the Armenians hardly appreciated Russia's neutrality either.

Secondly, the common Great Victory welded the brotherhood of the Azerbaijani and Turkish peoples with blood. In the report from the military parade, it was precisely the word "brotherhood" that sounded. Inevitably, you have to be consistent and continue the logic. If Turkey is objectively a historical enemy of Russia, which has become evident again in recent years, then it turns out that Azerbaijan is practically officially on the other side of us. Before the words "we will never be brothers" there is only a direct conflict between Moscow and Baku. There may be plenty of reasons: let's not forget that the Russian military is already on Azerbaijani territory. You never know what can happen there, especially if someone tries to arrange a provocation.

Thirdly, extremely alarming is the statement of the fact that international law has ceased to matter. The President of Azerbaijan directly stated this:

We have seen how international law does not work. Strength became the main factor. International law, UN Security Council resolutions remained on paper. A military solution to the conflict became inevitable.
That is, Baku is now ready to solve their problems by force and have gained successful experience in this. There is no doubt that all the neighbors in the region, and not only they, are watching all this very closely.

At last, the greatest danger from the defeat of Armenia lies in the noticeable strengthening of Turkey. Ankara has firmly tied Azerbaijan to itself, the number one candidate for integration in the format of the Great Turan concept. The Turks cut through the land corridor to the Caspian Sea with its resources, and also got access to Kazakhstan, Turkmenistan, Uzbekistan and Kyrgyzstan. In the future, these Turkic-speaking countries will be linked by a common infrastructure network leading through Azerbaijan and Turkey to Europe. The basis is being created for the formation of a new macro-regional association, a free trade zone, where the rules will be set by Ankara. The next logical step will be the emergence of a kind of military alliance, a unified Army of the Great Turan, a kind of Central Asian NATO. In this case, Russia with its CSTO and the EAEU goes through the forest.

It is especially worth paying attention to the words of President Erdogan, addressed to Yerevan:

Armenia should take up its mind. If the Armenian people can learn from the Karabakh war, a new era will begin in the region.
Now this may seem absurd, but a scenario is quite possible in which Armenia will be invited to participate in this supranational economic union by joining the international transit corridor. Armenia is seriously offended by Russia and may well take such a step under security guarantees from Turkey. Ankara constantly proves to all its partners that it does not throw words down the drain and is ready to actually fight for its interests and for allies. And we are her "tomatoes" ...
Ctrl Enter
Noticed oshЫbku Highlight text and press. Ctrl + Enter
We are
"Internal Affairs of Turkey". Ankara is looking for ways to gain a foothold in Nagorno-Karabakh
Russia's diplomatic blitzkrieg: Aliyev was forced to accept Putin's terms
Reporterin Yandex News
Read Reporterin Google News
49 comments
Information
Dear reader, to leave comments on the publication, you must sign in.