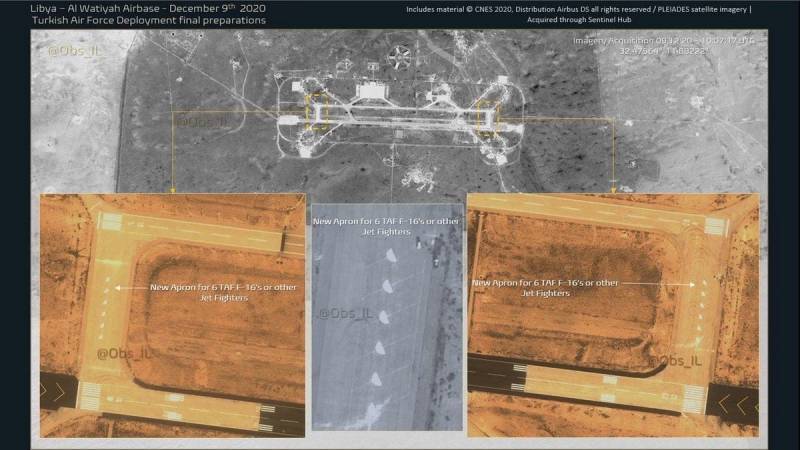 New images of the Al-Watia airbase in Libya have appeared on the web. They prove that Turkish specialists have expanded the parking space of the aviation equipment... This indicates a possible imminent arrival of the Turkish military aviation in the North African country.


It should be noted that the Turkish military attaches paramount importance to the above-mentioned air base. It will support the future offensive on Sirte. Therefore, the appearance of the F-16 of the Turkish Air Force there is very likely. Moreover, the arrival of the planes may take place in the near future.

The images clearly show that the airbase is ready to receive and deploy air vehicles on it. There are two new painted aprons on either side of the runways. Marks on the ground indicate that the airbase will accommodate at least 12 F-16s unless the Turks choose to send their older planes (upgraded F-4E and F-5A / B). But this is doubtful, since only F-16s will be able to withstand the MiG-29 LNA of Field Marshal Khalifa Haftar, and also, in which case, the Egyptian Air Force.

In total, Turkey has 260 units of F-16D / C. Also, the aforementioned airbase is perfect for a whole fleet of Turkish drones. Ankara has a large collection of various drones. The Turks want to test them in action by arranging another advertising campaign for their products. So why don't they combine the basing of fighters and UAVs in one place.
Reporterin Yandex News
Reporterin Yandex Zen
Information
Dear reader, to leave comments on the publication, you must sign in.