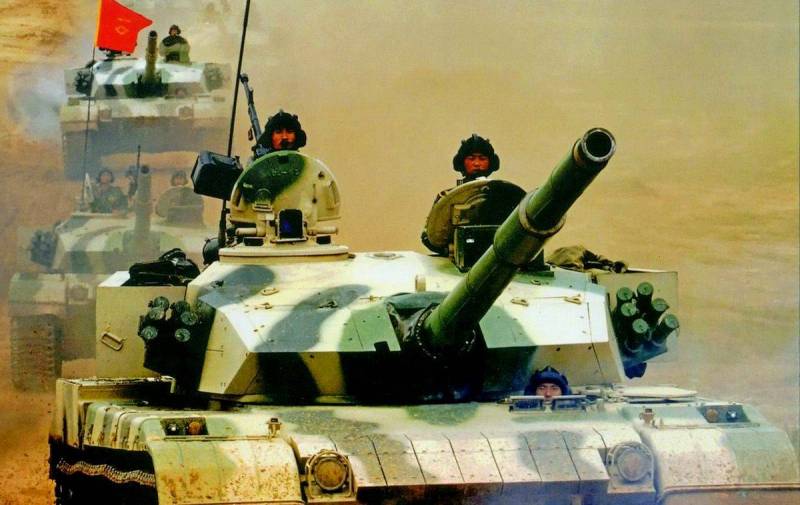 One of the main, if not the most important issue, the solution of which the newly elected US President Joe Biden will have to deal with literally immediately after the official entry into power, is the determination of the country's future course in relations with Beijing. It is the "Chinese direction", along with overcoming the consequences of the coronavirus pandemic and bringing the state out of the economic crisis, that American political analysts consider the "main challenges" facing the new head of the White House.


There is every reason for this - the previous administration not only left the new "legacy" with a huge number of problems with the Celestial Empire, but, in fact, brought the situation to a stage at which there are more and more concerns that the current US-Chinese policy may well be continued "By other means". That is, by using armed force. A military conflict between powers of this level is a danger that the entire population of the Earth is forced to reckon with. And Russia in particular. So is it worth hoping that it will not happen, or should one prepare for a war between the United States and China, as for something inevitable?

Beijing is not eager to fight, but is ready for battle

Recently submitted to the U.S. Congress, the annual report of the U.S.-China Commission on the economy and security, having become widely publicized through the media, caused a lot of noise in Washington. Still, this document directly and unequivocally indicates that after some one and a half decades, the People's Liberation Army of China will be able to become a fully worthy competitor to the United States troops in the Asia-Pacific region. And then it will only get worse ... For American geopolitical interests, of course. Analysts who compiled the report point to a "rapid" transformation of the PLA. In their opinion, literally in front of their eyes, it has recently turned from "a large, but technically backward army, developed at the level of the Cold War and capable of conducting only ground operations to defend its own territory," into one of the most advanced armed forces in planet.

The document states: in 5 years, the Chinese comrades will almost completely control the waters of their region. In 10-15 years they will be able, at least, to effectively conduct hostilities to protect their own interests in the countries that are part of the One Belt - One Road project. By the middle of this century, members of the commission are confident that Beijing will become a superpower capable of giving battle to its enemies literally anywhere on Earth. The PLA will turn into a "global power" and this is very frightening for Washington, which sees in such a prospect a threat to the "planetary expansion of the Communist Party of China", which "considers the liberal-democratic values ​​of the West an existential threat" and an obstacle in the implementation of its own ambitions in the fight against the same USA for the geopolitical influence.

It should be noted that the Celestial Empire itself reacted very negatively to the report I quoted above. Hua Chunying, a spokesman for the local diplomatic department, accused the members of the commission of "bias", due to which they are only able to "fabricate documents that are not supported by any evidence." In short, everything that sounded within the walls of the Congress was nothing more than "anti-Chinese rhetoric aimed at sabotaging bilateral relations between countries." With all due respect to the Chinese comrades, I cannot help but notice that in this case they are already going too far in their desire to look like “doves of peace”. The military budget of the Celestial Empire of almost 180 billion dollars is, of course, not the American 720-odd billion for similar expenses ... But after all, the second largest defense budget in the world. Moreover, the indignation of the local Foreign Ministry and its assurances of Beijing's peacefulness, let's say, is somewhat discordant with the unpleasantly frequent warlike statements of the head of state, Xi Jinping, that have recently become more frequent.

The militaristic notes in his rhetoric intensified more than noticeably, which can be seen in very specific examples. So, on October 14 this year, the Chinese leader, during his Marine Corps inspection in Chaozhou, called on the military to "prepare for war", mentioning that one of the main tasks of the next five-year plan will be "to significantly strengthen the army." An even greater strengthening ... Similar words came from Chairman Xi during a much more serious event - the November 25 meeting of the CPC Central Military Commission on military training. Having directed the army leadership to conduct training of personnel in conditions "as close as possible to combat", Xi Jinping ultimately urged its representatives "not fearing hardship and even death itself to prepare for future victorious wars." Pacifist, definitely ...

"Trade war" lost by the United States, next in turn - a military conflict?

With all this, statements about the desire of "Chinese communists to take over the world" in order to force the population of our planet to walk around with a party membership card in one pocket and Mao's quotation book in another is the utter folly of the level of cheap American paperback novels and low-budget Hollywood. Today's China is not only the Communist Party, but also the most powerful corporations, like any similar companies around the world, striving to develop more and more new markets. In the Celestial Empire, they really prefer to produce and trade, and not fight. We must pay tribute to its inhabitants - they have repeatedly become objects of aggression and colonization, while they themselves have not shown any special expansionist aspirations. Hong Kong and Taiwan? Well, here, sorry, the situation is extremely similar to our Crimea. We admit that in Beijing they have quite good reasons to consider these territories as belonging to the PRC by right. And the attempts of the United States to "pump" the same Taiwan with its weapons worth billions of dollars, is regarded as a rude and shameless interference in their own affairs.

Again, the "trade war" between the two states was unleashed, whatever one may say, not by Xi Jinping, but by Donald Trump, who dreamed of "making America great again", and certainly at the expense of China. You can also recall the literally frantic anti-Chinese rhetoric that has been heard from the White House and the State Department throughout the past year in connection with the coronavirus pandemic. Ultimately, this common misfortune for all mankind made its own adjustments to the confrontation between the two world powers, further shifting the balance towards the Celestial Empire, which coped with the disease much better and more effectively than its own opponents. By the way, many in the United States saw this fact as "ideological sabotage" - they say, in this way the communists "are trying to prove to the whole world the advantage of their system." Why are they "trying"? They prove ...

Moreover, while the United States at first enthusiastically “fought against racism and police violence,” nearly destroying the country, and then staged an enchanting show of the next presidential election, China, again, was engaged in business. The creation of such an organization as the Comprehensive Regional Economic Partnership (RCEP), at the suggestion of Beijing, is not just a global sensation. This is a stunning geopolitical victory for the Celestial Empire, putting the final end to any, practically, American ambitions in the Asia-Pacific region, and not only in it. The 15 countries that entered it with a combined GDP of more than $ 25 trillion and a population of 2.2 billion people are, in fact, a third of the world economy. The third part of the planet's trade is unambiguous.

For comparison, the GDP, which wants to position itself as the "arbiter of world destinies" of the European Union, does not even reach $ 2 billion, and the EU's population of half a billion does not look serious at all in comparison with the human resources of the RCEP. At the same time, it should be remembered that the vast majority of the states that make up this new "Asian club for select" states have already overcome COVID-19, while suffering much less human and material losses than Europe and the United States. US Secretary of Commerce Wilbur Ross can call the agreement a "very low quality agreement" as much as he wants, but one can only guess how many hairs were plucked from their heads by employees of his department in despair over what happened. In particular - because it was Washington that contributed to the creation of RCEP in the most active way. How exactly? First of all - the withdrawal (again, at the initiative of Trump) from the so-called Trans-Pacific partnership, "trade wars" with China and other countries in the region ... The United States sowed the wind and reaped the storm.

More than an alarming signal for them is the joining of the RCEP by the traditional allies and the most consistent agents of American policy in the region - Japan and South Korea. The United States, speaking in modern Internet slang, has "self-cut" from the Asia-Pacific region, leaving the countries there with no choice but to follow China. What can Joe Biden and his Democratic globalist team do about this? Almost nothing. As they say, the bets are accepted and the game is done. One of the most alarming moments in the situation with the creation of RCEP for Washington is the more than real prospect of ousting from the huge volume of trade and economic relations, which was discussed above, the American dollar as the main currency. This is a truly dire threat. Today, China is the only country that is really capable of "nullifying" the US dollar hegemony, and, consequently, completely collapse their economy, which has long been based not on the real sector, but on the uninterrupted operation of the Fed's printing press.

The new American administration is likely to try to make certain attempts to normalize relations with Beijing. On the other hand, even during his own election campaign, Biden called China “the main rival of the United States,” and for the rabid globalists who will most likely determine the foreign policy of the United States in the next four years, the current course of the Celestial Empire is completely unacceptable. New aggressive actions by the American side aimed at "curbing the Chinese expansion" can push the other side to really extreme measures, including real "de-dollarization" of, at least, the Asian economy. This is the main danger, because with such a development of events, a military conflict between the two countries will become almost inevitable from probable.
Reporterin Yandex News
Reporterin Yandex Zen
11 comments
Information
Dear reader, to leave comments on the publication, you must sign in.