Belarus: three main and irreparable mistakes of the "Maidan" 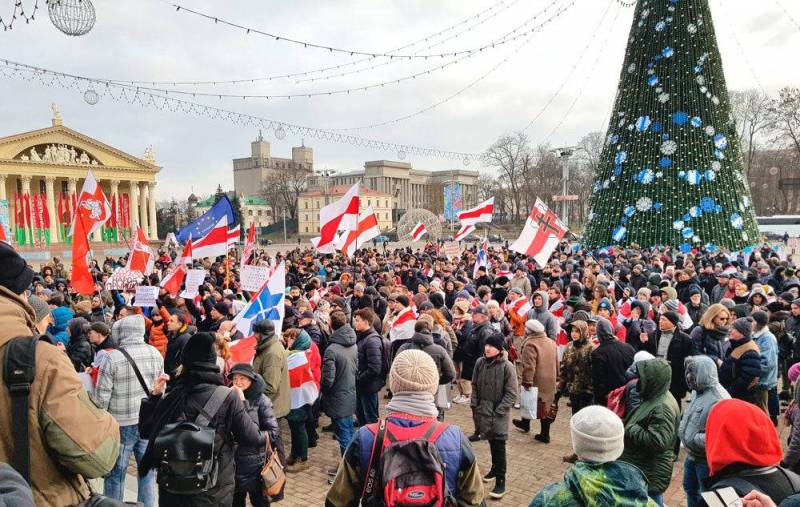 Every Sunday ribbon News necessarily dazzles with messages from Belarus: some people there again went to the next "march" with a new creative name, some of them finished their promenade in paddy wagons and police stations. Detained ... Arrested ... Protesters chanted ... Police used ...


Really, all this is already beginning to resemble an endless "soap" series, the producers of which stint on a decent screenwriter, and therefore each new episode of a boring and monotonous action is almost copied from the previous one. Honestly, I want to take the remote control and turn on fast forward - to the end.

At the same time, in fact, the denouement of what is happening at the current stage has already been predetermined. Nobody says that the Belarusian outrage will end tomorrow or, say, in a week. Yes, at least by the New Year ... Producers are paying at the very least, which means that all new "series" are ahead, just as poor. In fact, the "protest" there has, in fact, not a single chance of success for a long time. The Belarusian "opposition", and, most importantly, its foreign puppeteers, have made a number of serious mistakes that make their position hopeless and deprive the local "Maidan" of real prospects. We will talk about the three main mistakes of the "zmagars".

1. Did not break the connection between Minsk and Moscow

It must be admitted that by some of his own actions and aggressive rhetoric against the Russian side that preceded the unsuccessfully ended presidential elections, Alexander Lukashenko contributed a lot to the success of his future opponents. The strained to the limit relations between the two member states of the Union State put under enormous doubt the implementation of this project as such. The incessant reproaches of the official Minsk, which made more and more new claims to Moscow, seemed to have pretty much raised the heat of anti-Russian sentiments in the Belarusian society. All that remained was to deliver the final blow, and then the “dad”, who was left alone with the “opposition” supported by the West, could be taken with “bare hands”.

We must pay tribute to those who planned and prepared the Belarusian "color revolution" - the story with the "Wagnerites" was conceived on a large scale, with a grand scale and very far-reaching consequences. But why was it necessary to entrust the most important stages of its implementation to Kiev ?! The result is logical - the Ukrainian "special services" brilliantly failed everything they could. Ultimately, the provocation, which was supposed to split Lukashenka and Putin into a quarrel, make Moscow and Minsk enemies, only strengthened the Belarusian president in the opinion that the West wants to remove him, and if he can trust someone, rely on someone, then only to Russia.

The effect turned out to be exactly the opposite of what was intended, and even painfully hit the relations between Belarus and Ukraine, through which they were clearly going to organize the transit of "revolutionary cadres" and everything necessary for their subversive activities to this country. It was not so: the “father”, angry with the neighbor's meanness, closed the border tightly and, by the way, did the right thing. Separately, it is worth mentioning a number of statements made by Svetlana Tikhanovskaya regarding the Belarusian-Russian relations. On the one hand, she tirelessly insists that she sees them in theory as "friendly and partnership." However, the real attitude of the self-styled "president" to our country can be seen in her completely different words.

The fact that "all agreements reached by Lukashenko with the Russian side will be immediately canceled by the democratic government" she repeats even more often than the obviously false mantras about "good neighborliness". In any case, the last message of this kind, in which the creation of the Union State is called "the trade of independence", appeared on Tikhanovskaya's Telegram channel just last week. Thus, the Belarusian "opposition" and its leaders make themselves figures absolutely unacceptable for Moscow, and encourage them to support Lukashenka to the last. In addition, the president regained the sympathy of those Belarusians who see the country's future in an alliance with Russia, which is also important.

2. Motivated "siloviks" to stand to the last

It is perfectly clear to everyone that the events in Minsk and some other cities of the country have not yet passed from fairly harmless and, for the most part, peaceful events into a phase of truly mass riots, primarily due to the extremely harsh reaction to them by law enforcement agencies ... The “siloviks” clearly intend to stand against the “Maidan” to the end, and at the same time have repeatedly made it clear that, if necessary, they will take the most extreme measures to prevent any violent coup attempt. And here again there is considerable "merit" of the leaders of the "opposition" themselves.

If initially the same Tikhanovskaya tried to conduct at least some semblance of dialogue with people in uniform carrying the oath (albeit mainly through rather crude attempts to bribe and distribute clearly unrealizable promises), then the further, the more her messages are addressed to the “siloviki ", Boiled down to banal blackmail and attempts at intimidation. So, recently, the "President of the Light" announced the creation of a "unified book for registering and registering crimes of law enforcement officers." Moreover, the opposition leader stated that she firmly intends to “achieve international recognition of the Main Directorate for Combating Organized Crime and Corruption (GUBOPiK) and the OMON of the Ministry of Internal Affairs of Belarus as terrorist organizations”.

Now, according to her, it will be fraught with their employees getting into some "sanctions lists." But later, after the "victory of the revolution," they were "shone" by arrest and even "confiscation of property." At the same time, Tikhanovskaya continues to broadcast about some kind of "amnesty", which supposedly awaits the "siloviki" in case of "timely transition to the side of the people" (betrayal of the oath). However, such statements are largely disavowed by her own colleagues in the “opposition camp”. For example, the same leader of the KHP-BPF, Zenon Poznyak, insists that "every single riot policeman should be arrested", since "belonging to this unit implies collective responsibility."

It is clear that after the “zmagars” announce such “rosy” prospects, which will inevitably be implemented in the event of the victory of the “Maidan”, the Belarusian security forces will confront him to the last and will stop literally at nothing, defending, including their own the future as well as their families. Moreover, they have before their eyes the fate of their Ukrainian colleagues, who, after the coup d'état there, carried out according to similar patterns, were not only completely dismissed from the "organs", but also much more serious repressions. To this day, the Berkut fighters languishing in Ukrainian prisons are an excellent motivation for the Belarusian OMON not to retreat and not surrender. And the extremely harsh statements of the “oppositionists”, who even before the victory threaten them with persecution and punishment, only multiply this motivation many times over.

3. Didn't take into account the specifics of the country

All "color revolutions", developed in a single center and guided from it, repeat one another as much as possible. This is their strength, but this, as the events in Belarus show, is also the weakness of such special operations. The positive experience of successful coups d'état is summarized and applied in the next "project". That's just often - without taking into account local specifics, its subtleties and nuances. There is nothing surprising in this - the entire “post-Soviet space” for “white Sahibs”, who are trying to reshape it in accordance with their own needs and geopolitical plans, is a kind of faceless “gray zone”. Calling things by their proper names - native territory. And it doesn't matter what language the aborigines chirp in, and what gods they worship - the main thing is that they are not like "civilized gentlemen" who have the surest means for them: a weighty bunch of beads for show and a fair whip behind their backs.

The Minsk "Maidan" was organized, as they say, according to the "classics of the genre": "nationwide indignation" that erupted after the "falsified election" of the head of state, then openly provoking law enforcement officers for the most harsh reaction. This should have led to an escalation of street violence and, as a result, bloody chaos in which the country would have drowned. However, everything initially did not go according to plan - the Belarusians, accustomed to living for decades under the protection of the police in a real “reserve” that does not know criminality, were of course offended by batons and gas, but they didn’t throw paving stones in response and storm the regional departments.

Generally speaking, the story with the “Belomaidan” is like an attempt to make a “Molotov cocktail” according to the “nezalezhnoy” recipe from 2014 - it seems that they mixed everything right, and stirred it up, and set it on fire ... hisses, but does not give a real flame! The reason is simple - the ingredients are wrong. There is no anger accumulated by Ukrainians in Belarusians, no their own incomprehensible craving for chaos and self-destruction, no self-conceit above heaven, no creepy cave nationalism. Anyone who says that under Yanukovych people lived badly in Ukraine, lies godlessly (especially in comparison with the present day), however, even then they did not know the roads, cleanliness, or order of Belarus. Yes, and there was not in this country so many subservient to "Ovropa" and ready to crawl there "even a carcass, even a stuffed animal", even over the corpses of their own compatriots, as the neighbors had 6 years ago. The Belarusians' craving for a non-violent solution of all issues could not be overcome, even crying.

Again, the president was unlucky. Lukashenka, with all his shortcomings, was deprived of one of the main things - cowardice. And most importantly, it absolutely does not have those "levers of influence" through which it was so easy to influence many leaders of the "post-Soviet space", forcing them to surrender. Well, he has no foreign accounts and real estate - so take it! Again, such unpleasant figures as oligarchs are completely absent in Belarus. By this, everything is one with whom to negotiate - with the State Department, the European Commission or the bald devil. And all the same, what will happen to the country.

Trying to organize the "general strike" that turned into one of its most shameful failures, Tikhanovskaya somehow lost sight of the fact that the entire main industry in the country is state-owned. The victory of the "Maidan" for these enterprises will mean death, and for their workers - unemployment and poverty. And so - with everything else. The training manuals launched by its curators, trying to remain as long as possible on the Western contentment of the "opposition", may have been worked out quite well. However, the miscalculations made due to a lack of understanding of the local specifics have, in fact, made her victory unattainable. Unless, of course, Alexander Lukashenko makes no less serious mistakes ... But this is a topic for a completely different conversation.
Ctrl Enter
Noticed oshЫbku Highlight text and press. Ctrl + Enter
Reporterin Yandex News
Reporterin Yandex Zen
21 comment
Information
Dear reader, to leave comments on the publication, you must sign in.