How France began with the glorification of 12 SS soldiers, and ended up 12 killed in Charlie Hebdo 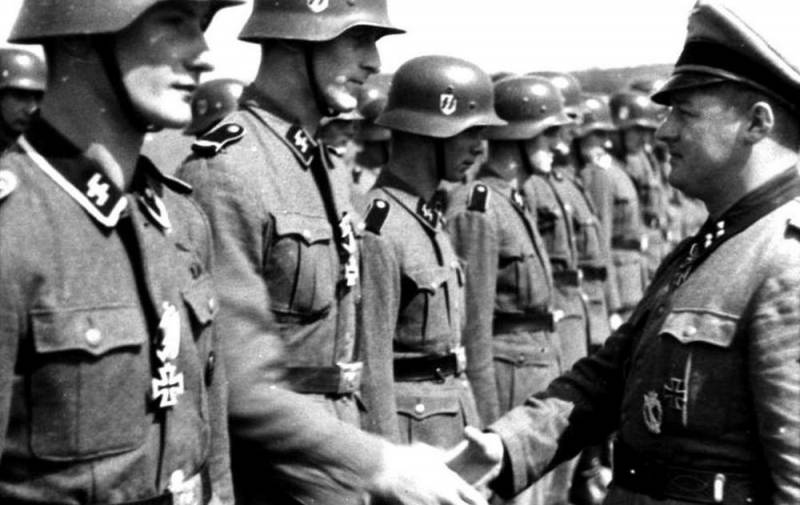 Europe's brain died. Did not know? It seems that something similar was recently stated by French President Macron, speaking about the "brain" of NATO. One could not even argue with this phrase of his. But one cannot fail to notice that this same brain died not only of NATO, but also of the entire EU leadership, and of Macron himself. And he died a long time ago. At this point, I'm just stating a medical fact.

After several consecutive terrorist attacks in France, all the world media began vying with each other to discuss the horrors of terrorism, the conflict between Emmanuel Macron and Turkish President Recep Tayyip Erdogan, as well as the cartoons of the Prophet Mohammed who provoked all this. Not for the first time, I note. I must say that on the "conscience" of these same cartoonists from the Parisian magazine "Charlie Hebdo" in total there are already more than twenty corpses. But ... apparently, for some, this is not an argument yet.

At the same time, from all sides in the European and our media there are talks about French national pride, about the values ​​of European civilization, as well as about how to fight for all this without fear of these very terrorists. Sounds like good. At first glance, one can even be glad that Europe has finally woken up, and, realizing the threat of Islamic terrorism in its own skin, remembered its pride and historical traditions. But if someone thinks that this is actually the case, then I have to disappoint you - this is not so. From the word at all. This is not an epiphany, this is the very death of the brain.

Let's see where exactly all this is happening, in what kind of Europe. This is happening in that very super-tolerant, multicultural and hospitable Europe, where the dignity of each person, his ideals and beliefs, including religious ones, is put above all else. In the same France, crosses are removed in schools so as not to offend the feelings of Muslim students, and in Denmark, traditional pork meatballs, and pork in general, are prohibited in canteens of educational institutions for the same reason. In Britain and Ireland, they went even further, there, to please the "guests" who have come in large numbers, even Christmas itself is already called "seasonal holidays" ...

Now, with all the evidence, only one thing can be stated - the West is dead. His body decomposes and is filled with scavengers, devouring his flesh that has not yet cooled down. They live on welfare; they live very well on welfare; they invite their friends and family to a place where they can live well on welfare. The fact that some Swedes or French still live in this blessed place due to a misunderstanding does not matter. Europeans no longer breed; they do not even mind against the tolerant use of their women for this - and in general, they can go to their America or somewhere else, to Africa, for example, to Antarctica, to Mars. The fact that such a strategy of "assimilation" will bring down the current prosperity of Europe does not bother migrants one iota. First, they don't think so far; secondly, even the local ruins will still be better than the abandoned hollow of the baobab tree.

But how did enlightened Europe come to life like this? After all, such changes do not occur in one hour, it seems, it was cooked over low heat. We will now consider this on the example of France. To understand such metamorphoses, you have to start from afar.

Heroes of France and soldiers of the SS

On the night of April 23-24, 1945, the commander of the 33rd (1st French) Waffen-SS Charlemagne Grenadier Division, SS Brigadenführer Gustav Krukenberg received an urgent telegram from the Berlin Reich Chancellery in Neustrelitz with the order to immediately arrive in Berlin to defend the capital of the Third Reich. In the ranks of the French division, which at the beginning of 1945 numbered about 7,5 thousand fighters, by that time there were no more than 1100 people. 330 volunteers volunteered to defend Berlin, of which a separate assault battalion was formed. On April 24, the battalion set off for Berlin in nine trucks. In the capital of the Reich, they managed to break through the northwestern suburbs in Nauen a few hours before the Soviet troops completely encircled the city.

It was these Frenchmen who distinguished themselves in the battles for Berlin, they were the last defenders of the Reich Chancellery, it was they who defended Hitler's bunker to the last. They fought fiercely, only in one day of fighting on April 28, out of a total of 108 Soviet tanks destroyed, the French “Charlemagne” destroyed 62. And SS Unterscharführer Eugene Valo was even presented to the highest Reich award Knight's Cross of the Iron Cross for the destruction of six of them, becoming one of the his last cavaliers (three days later he died from a bullet of a Soviet sniper, not having lived only a month before his 22nd birthday and a week before the end of the war). When on the morning of May 2, after the announcement of the surrender of the garrison, Soviet troops took the Reich Chancellery, there, except for 29 Frenchmen, no one was left alive.

In total, from September 1941, when the French Legion was transferred to the Eastern Front under German banners, until May 1945 through the legion, disbanded in 1944, and its successor, the 33rd Waffen-SS Grenadier Division, more than 10 thousand . the French. The remnants of the division surrendered to American troops in May 1945. It is with them that the story that I want to tell you is connected.

On May 6, 1945, in Bavaria, 30 km from the resort town of Bad Reichenhall, 12 Frenchmen who served in the Charlemagne division and who had just left the hospital after being wounded surrendered to the American troops without resistance. The next day it turned out that the city was being transferred to the zone of responsibility of French units from the division of General Leclerc.

Reference: General Philippe Leclerc, at the head of the 2nd French Armored Division, from July 31, 1944, together with the Allied forces, participated in the liberation of France, starting with their joint landing in Normandy.
When it became known to the surrendered SS men, they tried to escape, but were detained by French patrols. The general drove up to the place of transfer of prisoners of war. Upon learning that the soldiers in German uniform were French, he became indignant and began to insult them, calling them "boshes" and "traitors." When he said the words: "How could you Frenchmen wear a German uniform?" - one of the prisoners could not stand it and brazenly replied: "Just like you, general, you can wear an American one." This phrase became a death sentence for all of them.

After these words, Leclerc fell into a rage and ordered everyone to be shot. According to one version, the general gave such a cruel and contrary to the laws of the Geneva Convention, being under the painful impression of inspecting the death camp in Dachau, where, it seems, Leclerc was on the eve. Be that as it may, the next day, May 8, 12 French SS men were led to be shot. At their request, a Catholic priest spoke to them. After that, the condemned refused to blindfold or "humane" shooting them in the back. Just before the execution, they began to sing the Marseillaise and shout “Vive la France!”, Looking into the faces of the firing squad. Fierce by this behavior, the general gave the order not to bury the bodies, but to throw them in the clearing. Only three days later they were buried by the Americans.

In 1947, the Germans transferred the ashes of those executed to the monument. We managed to find out the names of several soldiers. They were knocked out on a granite slab, where one of the symbols of France "royal lily" is depicted, and the words "12 brave sons of France" are written. Here are the names of those whose documents were found:

At home, these people are elevated to the pantheon of military glory and are equated with the Heroes of France. Any questions? They are worshiped on a par with the heroes of the "Normandie-Niemen". How can you both defend the right to publish cartoons of the Prophet Mohammed and condemn the violence caused by it? These people have long had all the signs of mosaic schizophrenia and bipolar split consciousness. Since 1945, they have condemned Nazism, and since 1947 they have been worshiping its last defenders. This is no longer cured. The West is dead!
Ctrl Enter
Noticed oshЫbku Highlight text and press. Ctrl + Enter
We are
"We must beat first": the geopolitical alignment around Russia is continuously deteriorating
Ten "defeats" of Putin
Reporterin Yandex News
Read Reporterin Google News
55 comments
Information
Dear reader, to leave comments on the publication, you must sign in.