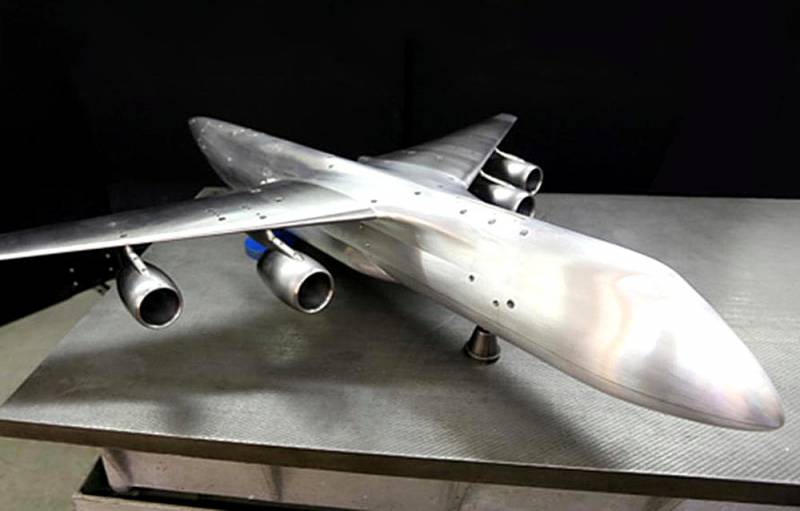 To date, the heaviest and most cargo-lifting aircraft in Russia is the Soviet An-124 Ruslan, whose production base is Ukraine. However, the need to update the aircraft fleet and switch to domestic products is long overdue.


In 2015, Kiev refused to cooperate with Moscow in the field of aircraft construction. It was not possible to establish the production of An-124 Ruslan in Russia, which prompted the Russians to independently resolve the issue. So in 2016 a very remarkable project appeared under the code "Elephant", which is being developed by the Central Aerohydrodynamic Institute. N.E. Zhukovsky (TsAGI) by order of the Ministry of Industry and Trade.

The new heavy aircraft should be based on modern of technologies and work experience in transport aviation. In 2017, a concept project was presented with the initial appearance and characteristics of a promising transport vehicle. "Elephant" will be able to take on board 150-180 tons and deliver cargo at a distance of 4,9 thousand km to 7,7 thousand km at a speed of 850 km / h.

Subsequently, TsAGI regularly published reports and reported on the phased progress of the project. For example, about carrying out purging of an aircraft model in wind tunnels, as a result of which recommendations were given to designers who were to be embodied in the technical part of the project.

In January 2019, an improved aerodynamic model of the aircraft appeared, designed for research and various tests (pictured above). In November 2019, TsAGI announced the start of work on aerodynamic blowing of a scale model of the climbing apparatus. In March 2020, the first cycle of aerodynamic tests was completed there.

But the final appearance of the aircraft may change several times, however, not cardinally. The "Elephant" should be built according to a normal aerodynamic configuration, have a high-sided wing of a caisson structure of large aspect ratio and a single-fin tail.

Almost the entire length of the fuselage of the aircraft under development should be occupied by the cargo compartment. The giant will have a bow and aft loading ramps with pressurized functions, as well as a second deck for transporting additional "payload" and people. The "Elephant" should be equipped with four powerful by-pass turbojet engines. The glider will be made using composite materials and special metal alloys. 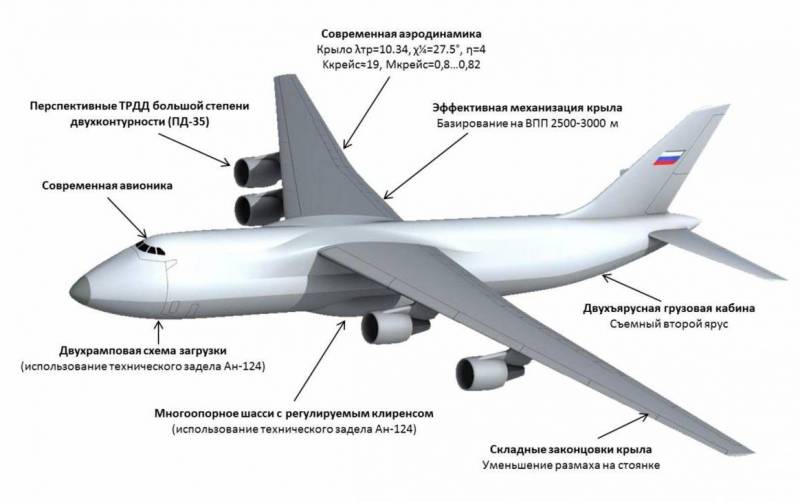 Fuselage "Elephant" in its layout and design will resemble "Ruslan", but this is only at first glance. It will have a cross section formed by the intersection of circular arcs. Due to this, it will be possible to keep the width of the cargo compartment floor at the required level, while the ceiling height will grow to 5,2 m (with the lifting of the load by the crane beam up to 4,01 m).

There are two configurations of the cargo compartment with two different fuselage widths. In the first one - 5,3 m wide for transportation of standard containers and pallets. In the second - with a width of 6,4 m for the transportation of various equipment with its two-row arrangement. The cockpit will be located in the forward fuselage, above the cargo hold behind the lifting fairing. Behind her, it is proposed to equip a room for a replacement crew. There should also be a room for personnel accompanying the cargo. The pressure in rooms with people will be maintained at a higher level than in the cargo hold.

The wing of the "Elephant" should have a sweep in ¼ chords of 27,5 °, an aspect ratio of 10,34 m and a narrowing of 4 m. The relative thickness is from 10 to 14%. The total wingspan will be 87-88 m. It will have folding tips, and the trailing edge is equipped with mechanization. This will simplify the operation from the runway to 2,5-3 km.

Power units should be developed PD-35 with a take-off thrust up to 35000 kgf. They will be installed on pylons under the wing. The first prototype of the aircraft engine should appear by 2023. The development is promised to be completed in 2025, and mass production will begin in 2028.

The landing gear of the aircraft will be in the form of two bow steerable supports and 14 main ones, 7 on each side. The design of the struts should provide amortization, as well as a change in ground clearance, including the inclination of the aircraft in the desired direction.

The overall dimensions, weight and other characteristics of the aircraft depend on what kind of cargo it will have. According to calculations, an empty aircraft with a "narrow" fuselage should have a mass of 214,31 tons, with a "wide" one - 222,3 tons. The payload mass is determined at 150 tons. The fuel reserve is 124-125 tons. The maximum mass for two aircraft variants reaches 490,2 tons (with a narrow cabin) and 499,14 tons (with a wide one).

Aircraft development is a lengthy process. A number of proposals still need detailed elaboration. Only then will the project be able to move to the stage of creating the first flying prototype. The Elephant project is of great interest, therefore it will develop further, there is no doubt about it.
Reporterin Yandex News
Reporterin Yandex Zen
12 comments
Information
Dear reader, to leave comments on the publication, you must sign in.