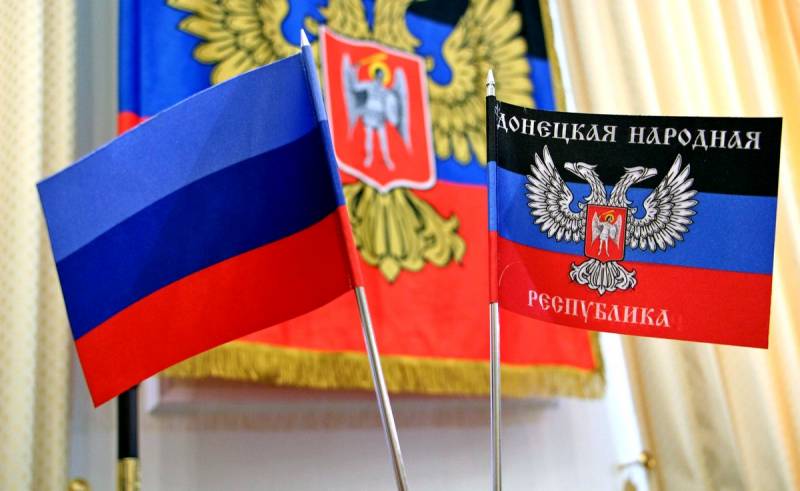 The continuing exacerbation of relations between Russia and Western countries has recently begun to take on more concrete outlines. On the basis of the sharply intensified demarches of our "friends", one can assume with a high degree of confidence what their efforts will be focused on in the near future. Calculate, so to speak, the "direction", if not the main, then the most probable strike, the aim of which will be the maximum weakening of Russia's geopolitical positions. And not in any particular region, but, at least, in the entire “post-Soviet space”.


It is very likely that the West has taken a clear and unequivocal course towards the withdrawal from the protection of our country of state formations with the status of "unrecognized republics" with their subsequent complete liquidation. In principle, this is more than a natural and predictable move. Let's try to figure out what specific consequences the development of the situation in this vein can lead to.

"Outposts of the Russian World" or a Source of Problems?

Let's be frank - every single one of these regions exists solely because they enjoy the direct patronage of Moscow. Abkhazia, South Ossetia, Pridnestrovian, Donetsk and Luhansk people's republics - none of them would have existed for a long time, if behind their backs the notorious "Russian world", which is so hated and so feared in the West, would not be looming ... Until recently, the Nagorno-Karabakh Republic was a "special article", but since November 10 of this year it has also found itself on the same list of "unrecognized states" living under the shadow of Russian power and power. It should be admitted that everything turned out the way it did solely due to the fact that the territories on which the self-proclaimed enclaves subsequently arose were part of the republics of the Soviet Union, where, whatever one may say, Russia occupied the dominant position.

Ultimately, the birth of all of them (except, again, perhaps, perhaps Karabakh), the "independent states" formed after the collapse of the USSR are due to the fact that policy the most outrageous nationalism. It was the actions within its framework, and at the state level, that literally "pushed" from these countries that Transnistria, that Abkhazia with South Ossetia, that Donbass. Proof of this statement is the fact that until 2014, before the neo-Bandera "thugs" came to power in Kiev as a result of a coup d'etat, both Crimea and the current DPR and LPR at the very least got along with the rest of Ukraine and did not intend to separate from it. So, when the West tries to assert that the "unrecognized republics" are "a product of Moscow's imperial policy," they are trying, as they say, to turn everything upside down. Quite the opposite happens.

These are just quite definite Western structures and organizations, knowing full well that the establishment of their full control over the "post-Soviet states" is impossible exactly as long as they maintain strong ties with Russia, arrange color revolutions there ", while promoting the most aggressive nationalist ( if not Nazi) forces. Further, the natural process of rejection of what is happening by a certain part of the population begins, often concentrated compactly in a particular region. This is followed by a bloody attempt to "pacify the separatists" with fire and sword. And then - Russian peacekeepers appear ... Until the last point, the matter has not yet reached only in the Donbass. Alas, it didn’t make it ... This is how the very “unrecognized republics” arise, which today are so worried about the US State Department, the European Commission, NATO and many other serious “offices”, which, in principle, have absolutely no reason to poke their nose into business occurring at the borders of Russia. What are these enclaves for our country?

First of all, in my opinion, one of the few real proofs of the legitimacy of its claims to the role of a world power. It is in the ability to save and protect those who ask for it, and this is the difference from countries that have long been not subjects, but objects of geopolitics. Military benefit? It is controversial enough. After all, the "aggressive plans of Moscow" exist exclusively in the fevered imagination of Messrs. Pompeo, Stoltenberg and the like. Evidence? It is elementary that Russian troops did not take either Tbilisi in 2008 or Kiev in 2014. How correct these decisions were is a separate question, but the fact that Russia had all the possibilities for a “final solution of the issue” with its own “neighbors” in both of the above cases is indisputable. Economic interest? There is even nothing to discuss here - aid to the "unrecognized republics" is costing our country that "pretty penny". And, nevertheless, we cannot refuse them in any way. If only due to the fact that this is what the West is so thirsty for today.

Recognize someone else's independence or lose your own?

As a matter of fact, one should not even try to deny the only undoubted benefit for Russia from the existence of “unrecognized republics” on the territories adjacent to it. It consists in the fact that their very presence is an insurmountable obstacle to the entry of our neighboring countries into NATO. Neither the Alliance nor the European Union needs new members with unresolved territorial problems and a military conflict, even if it is “frozen,” as they say, no one needs them for nothing. However, we have to admit that recently this moment has lost its relevance. On the territory of Georgia and Ukraine, the fighters from the North Atlantic Alliance feel quite at ease, and objects that are clearly not for peaceful purposes completely under their control are being set up. Recently, in the West, voices have been heard louder and louder, calling for as soon as possible and wider to open the doors of NATO to both Tbilisi and Kiev. But they firmly intend to exclude Russia from deciding the fate of the "unrecognized republics", and, again, as soon as possible.

The example of Nagorno-Karabakh clearly "strained" our "friends" very much and pushed us to the most decisive actions. How events will develop in the Caucasus itself is not yet very clear. “Squeezing out” our peacekeeping mission from there will automatically play into Turkey's hands and lead to a sharp strengthening of its positions in the region. This is now not beneficial to the "world community" - at the meeting of NATO foreign ministers held the day before, the head of the US State Department Mike Pompeo, who was present there, gave Ankara a natural "scolding", calling its actions (including in the Caucasus) "provocative" and "destructive unity of the Alliance ”. No, no one will play along with Erdogan - at least not now. Apparently, the newly elected President of Moldova Maya Sandu is to become the "locomotive" of the anti-Russian demarches in the direction we are discussing. Such was her role assigned by those who contributed to her coming to power.

Not even having time to go through the inauguration procedure, this lady, instead of worrying about pressing problems, which Chisinau has more than enough, began with perseverance and constancy worthy of better use, to repeat the urgent need to withdraw Russian peacekeepers from Transnistria. Moscow quite naturally perceived these conversations as "irresponsible" and "unacceptable", according to the head of the Russian foreign policy department, Sergei Lavrov. The head of the PMR itself, Vadim Krasnoselsky, reacted no less coldly to Sandu's statements, advising the politicians from Chisinau to “think over their position better” and generally not try to “create artificial problems” where they do not exist. In the opinion of the leader of the "unrecognized republic", there are not even the slightest prerequisites for the withdrawal of Russian peacekeepers from its territory. It is noteworthy that, in parallel with the demarches regarding our military contingent, Sandu made several more rather ambiguous (especially if we consider them in a general context) statements. For example, that in Belarus “the will of the people is not respected” and “violence” is taking place, which must be stopped ”...

Even more interesting are her words addressed to Kiev: Sandu claims that “attempts to“ solve the problem of Transnistria using a “soft approach” turned out to be “unsuccessful,” and Kiev should certainly “take this experience into account in the issue of the reintegration of Donbass”. This already smacks of a real provocation. However, there is nothing to be surprised at - after all, all the statements of Mrs. Sandu and the attack she launched on the Russian peacekeeping mission in Transnistria, in fact, are just a submissive repetition of theses put forward at much more serious levels. This is what worries me.

Recently, NATO Secretary General Jens Stoltenberg has become extremely concerned about the problem of the "unrecognized republics". You could say he tackled it in the most fundamental way. Speaking at a regular conference of the Alliance, this figure said that “Russia's illegal annexation of Crimea, its actions to destabilize the East of Ukraine, as well as its illegal presence in some regions of Georgia and Moldova” is nothing more than “a gross violation of international law” and “ an encroachment on the territorial integrity of these countries. " What is in front of us? Yes, as a matter of fact, an exhaustive list of those places from which Russia will be "asked to leave" in a very short time. And this will be done, most likely, in an extremely harsh and ultimatum form, which implies the most unpleasant consequences for our country in case of refusal. It is quite possible that as an alternative it will be declared the accelerated admission of the same Georgia and Ukraine (and in the future - and Moldova) to the North Atlantic Alliance with all the ensuing consequences. There is, however, a worse option. It was recently voiced on the air of one of the main "mouthpieces" of the West "Radio Liberty", the ex-Minister of Defense of Moldova Anatol Salaru, who proposed to create a "special international tribunal", which should "recognize Russia as an aggressor country" and "force it to withdraw the occupation troops". It is even difficult to imagine exactly what methods are supposed to carry out such “coercion”.

It would be possible to write off such calls for the weak adequacy of certain current or "circulated" politicians, if exactly the same ideas were not heard from the lips of the head of the world's largest military-political bloc. It is absolutely unambiguously planned to begin the destruction of the influence of our country outside its borders with the expulsion of the Russian military contingents from the "unrecognized republics", which will be immediately absorbed by the countries obediently following the course to the West. Our state will find itself in an even more hostile environment, and the next threats to its sovereignty and independence will arise directly on Russian territory, which will automatically turn into "the last line of defense" for us. The conclusion suggests itself that in the current situation, Moscow simply has no choice but to do what it has not dared to do over the past decades.

There is only one option - to officially recognize all the "unrecognized republics" in the same way as was done in relation to Abkhazia and South Ossetia. Recognize and accept under their protection with the conclusion of appropriate agreements. Will be worse? It will no longer be ... Or rather, perhaps, if Russia does not seize the initiative in the now unfolding new round of conflict with the West and allows it to develop according to the plan and rules of our opponents.
Reporterin Yandex News
Reporterin Yandex Zen
10 comments
Information
Dear reader, to leave comments on the publication, you must sign in.