The Price of a Wrong Decision: The Day Russia Lost Ukraine Forever 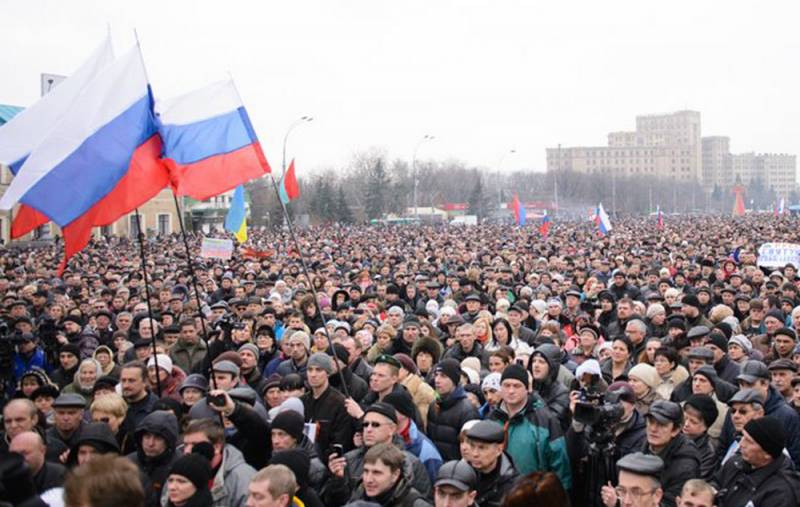 You have to pay for everything in this life and everything in this life has a price. Russia now and all these 6 years is paying for the cowardice shown in 2014. All subsequent events were the result of one wrong decision. Sooner or later, the truth had to surface, and it surfaced. Oleg Tsarev finally said in plain text what we all suspected, but we had no real confirmation of our doubts. Now they are. Oleg Tsarev knows, of course, more than he can say, but, apparently, the time has not come yet. But what has already been said is enough to close the picture of what happened in 2014. It was worse than a crime - it was a mistake!

Listen for yourself (from 7:04 a.m. to 8:43 a.m. inclusive). We are talking about the events of March 2014 in Kharkov. I remember them very well, because I was a participant in them myself. The Kharkiv Regional State Administration then passed from hand to hand (and Motorola, which emerged later in Donetsk, took a direct part in this), along Sumskaya (this is the main street of the city) a crowd of 10 thousand carried the Russian flag unfolded 100 meters, at a time when those who seized power in Kiev, the conspirators frantically divided offices, in horror awaiting Moscow's response. In vain they were afraid! Moscow has merged not only Yanukovych, providing him only with evacuation, but also this entire outskirts, out of control. It was then that two of our local "Kermanychs" - Kernes and Dobkin, who had ridden protest moods before, suddenly disappeared from the city for one day. Everyone wondered where they could go when such events are brewing here. They said that they were already in Switzerland, negotiating with Kolomoisky. The truth turned out to be much more prosaic.


As Oleg Tsarev says, Dobkin really went to Kolomoisky, only not to Zurich, but to Dnepropetrovsk (God, then it was still Dnepropetrovsk!), And Kernes moved to the Russian Federation (most likely to Belgorod, but maybe to the capital) with whom he spoke, Tsarev does not say, but most likely it was Surkov. According to Tsarev, Kernes received an unequivocal answer that Moscow would not interfere in the events in Ukraine. Dobkin got guarantees from Kolomoisky that everything would be a "bundle", don't be silly, guys, join us. As a result, the guys returned and joined the conspirators who usurped power in Kiev. This was the very point of no return, after which Ukraine rushed into the abyss, dragging Russia along with it. Those who still do not understand this, never risk it and do not understand it, completely protecting their own refrigerator (not in the figurative, but in the literal sense of the word) until they discover that their refrigerator no longer belongs to them. Because at one time, at a fork in the road, Russia chose the wrong path for itself. Is it any wonder that she led her to hell ?!

Then, returning to Kharkov, Kernes led the protest and blew it up (according to the principle: if you can't ban - lead!), Successfully channeling the protest movement of the masses. Dobkin, not finding himself in the new government, went into its soft opposition, but lost more than gained. Oleg Tsarev also lost, but that's it. But that was his choice, and I respect him for that! Having learned from Kernes that Moscow was winding up Russian Spring, he still managed to call Ben Kolomoisky in Dnepropetrovsk and agreed to release his supporters, whom Beni Filatov and Korban's assistants had already packed into the local pre-trial detention center, and he himself decided to go all the way, and it is not his fault that now he while away his time in Crimea as a political dissident. And Russia got what it deserved - a terry anti-Russian fascist regime in Kiev, real fascism, without any quotes, with which the state does not fight, but on the contrary, cowardly encourages the once fraternal population that hates it, the number of which is growing in proportion to the megatons of nonsense pouring from the zombies -box, a bunch of problems and sanctions. But you would have received sanctions anyway. So were they worth what I listed above ?!

Now I wrote and thought, but nobody knows this, except for the people who took a personal part in the events. For most Russians and even Ukrainians, the events of 2014 are linear. A coup d'etat, Krymnash, Donbass - that's it, the gate slammed shut. Russia lost Ukraine, and Ukraine itself lost its future. Many Russians still naively believe that Krymnash was conceived in advance in the dark corridors of the Kremlin and was quietly lying there in someone's safe, waiting in the wings. The Ukrainians, on the other hand, believe that Putin, taking advantage of a convenient moment, simply stupidly squeezed out Crimea.

The reality is somewhat different. Those. so different that it is just diametrically opposite. I myself learned this only many years later, directly communicating with people who are most directly related to the events of 7 years ago (all have medals "For the return of Crimea" and other state awards). Events in Crimea developed not from above, but from below. The Kremlin intervened only at the second stage. The turning point was the night when unknown people, later called polite, seized the Crimean parliament. Even in the afternoon, the Tatars of Chubarov ruled there, in a frenzy under the influence of the Kiev events dictating their will to the speaker Konstantinov, seriously discussing the demolition of Soviet monuments and other nishtyaks directly related to European civilization. In the evening they, inspired, dispersed, suggesting in the morning to return and continue, but at night the parliament was captured by some armed people. Many Russians believe that these were Putin's people, maroon berets, special forces of the Internal Troops (which later became the basis of the Russian Guard in 2016). In fact, it was Girkin's group. It was she who played a key role in the Crimean events. The Tatars woke up in the morning and to their horror found that the train had left at night, the Crimea swam away from them, waving the Russian flag. And only after that, Vova Putin entered the scene, carrying out a classic takeover of control and taking control of the situation with the help of those very polite people.

But Putin's plans did not include Donbass and other regions of Ukraine, where people began to come out to the squares en masse, disagreeing with the events in Kiev. This is the tragedy! There was no political the will to prevent the development of events in Ukraine according to an undesirable scenario. If they had such a will, they would have all the cards in their hands. It was possible to use the request of the then legally elected Yanukovych for help in restoring the constitutional order violated by the conspirators and the permission of the Federation Council of the Russian Federation to use the Russian Armed Forces for this. It was possible to support the reluctance of the local elites in the southeast to lie under Kiev and were looking for Moscow's support in this.

In the first case, it was possible to keep the whole of Ukraine in a pro-Russian wake, while retaining the power of Yanukovych. At the same time, Galicia would risk becoming the Ukrainian Donbass, becoming in opposition to Yanukovych, a kind of European cesspool of separatism, supported by the West, a variant of Ukrainian Kosovo. In the second case, it was possible to keep at least the South-East, splitting it from the rest of Ukraine. But Moscow's decision was made unequivocally - about non-interference in the events in Ukraine. When Kernes and Dobkin learned about this, they changed their shoes right in the air. Kernes left for the Russian Federation while still having pro-Russian views, and returned as a moderate Ukrainian patriot, and did everything so that Kharkiv did not follow the path of Donbass.

The whole tragedy of Donbass lies in the fact that the entire local regional elite fled from there and all power passed into the hands of the rebellious people, who were inspired to do this by the entry of Girkin's (Strelkov's) detachment into Slavyansk. But few people know that it was a personal initiative of the latter. Girkin and his people acted at their own peril and risk, misinterpreting Kremlin policies for themselves, trying to scale the successful experience of Crimea across Ukraine. And if in Kharkov Kernes managed to channel the protest movement of the masses, leading it, then in Donetsk and Lugansk there was no one to do this. The elite fled, all power passed to the insurgent people. As a result, already Putin had to take over control there. Donbass was not at all included in his plans, but the situation got out of control. Now we have a bleeding Donbass. Looking at him and how Russia treated him, Kharkov would not at all want to repeat his fate, and for this the townspeople thank Kernes. It is, of course, hard to live in modern Ukraine under conditions of moral occupation, but we did everything we could (and Oleg Tsarev confirms this).

Everything could have gone differently, but the story, unfortunately, has no subjunctive mood. The benchmark point, the point of no return, was Kernes's visit to Moscow (or to Belgorod, I don't know). After that, Ukraine drove in one direction, and the chariot of the Russian Federation in the other. History was written on this very day. If the Kremlin had given the go-ahead to Kernes, the Russian Federation would have retained the entire southeast, and most likely all of Ukraine, except for Galicia. There would be Donbass, but not for Poroshenko, but for Yanukovych (the pastry chef was not yet president, and in this situation, there would be no elections either). The situation would have developed diametrically. But it happened as it happened.
Reporterin Yandex News
Reporterin Yandex Zen
84 comments
Information
Dear reader, to leave comments on the publication, you must sign in.