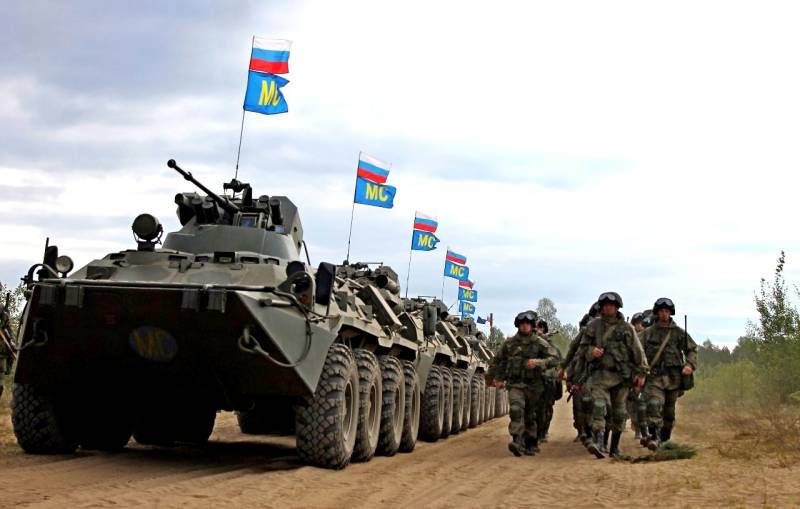 The Karabakh success of Azerbaijan turned the head not only of Kiev, where they looked at the unrecognized republics of Donbass with a new look, but also Chisinau. Even without taking office, the first thing the elected President of Moldova Maia Sandu did was to return to the problem of Transnistria (PMR), which is Russia's “Achilles' heel”. Apparently, a course has been taken to finally break the historical ties between our countries according to the "Ukrainian scenario" and push Chisinau into the strong embrace of the West. Unfortunately, there are no special options to prevent this.


Mrs. Sandu put on the agenda the issue of Russian troops and peacekeepers in her country, as well as the debt of Tiraspol for gas supplies, clearly linking them together. At the same time, she subtly hinted at how events could develop if Chisinau does not receive what it wants from the Kremlin.

At first, all Moldovan authorities are consistently demanding the withdrawal of Russian troops. Let us recall that they are present there in two qualities: they are peacekeepers guaranteeing the security of Transnistria, as well as an operational group of troops assigned to guard military depots filled with weapons since the collapse of the Warsaw Pact. Initially, there were 60 thousand tons of ammunition, by now the total amount has decreased to 20 thousand tons due to the gradual removal and disposal. These are cartridges, mines, grenades, shells, aerial bombs. It is believed that half of this good has expired, and it cannot be transported. The total number of the Russian contingent in Moldova is estimated at XNUMX people, and they are there with the consent of the OSCE. The US even offered Chisinau assistance in disposing of ammunition in order to speed up the process of withdrawing the Russians. The newly elected President Sandu proposed replacing them with some civilian observers under the auspices of the OSCE. Moscow responded to her initiative without enthusiasm, Russian Foreign Minister Sergei Lavrov said on this occasion:

We will hardly be able to accept such a rather irresponsible demand ... They primarily solve the problem of maintaining stability in this region, which is of fundamental importance so that there would not be some new outburst of bloody conflict.
Indeed, in the current geopolitical realities, a relapse of the Transnistrian conflict is quite possible. The new Moldovan authorities have clearly chosen a course towards integration with Romania within the European Union. Pro-Russian Transnistria will be like a bone in their throat, and when the peacekeepers leave, nothing will prevent Chisinau from taking control of the unrecognized republic. The most bloody scenario is possible if the warehouses with weapons fall into the hands of local nationalists, who, according to the "Ukrainian scenario", will gather in volunteers and go to establish their own order there.

Secondly, there is a problem of debt for gas supplied from Russia. A fairly powerful industry has remained in Transnistria since Soviet times, which consumes Russian gas, and its products go to our country. You have to pay for fuel, but Chisinau has taken an interesting position: it considers the unrecognized republic its territory, demanding the withdrawal of peacekeepers from it, but refuses to pay its debts on principle.

The fact that President Sandu linked these issues speaks of her readiness to bargain with both the Kremlin and the West. In all likelihood, Russia will be given a choice: to write off the gas debt instead of the fact that our military will remain for now, or Chisinau will still pay the debt for Tiraspol, but the Russians will have to go out. In the latter case, the costs of Moldova can be compensated by the West, represented by the European Union, for removing from its borders a completely unnecessary armed pro-Russian enclave. Debt cancellation by Gazprom will be perceived as a great victory for President Sandu, but $ 7,5 billion is a large sum even for our "national heritage", which has run out of money over the past few years. There is no doubt that the next step will be to return the issue of the Russian military contingent to the agenda. And getting out will be extremely problematic.

The point is that Chisinau has a fairly wide arsenal of means of pressure. Together with Ukraine, he can take the unrecognized republic into economic blockade and begin to strangle it. When Turkish and Israeli attack UAVs suddenly appear in Moldova, it will be a transparent allusion to the possibility of a "Karabakh scenario." If President Sandu closes the PMR problem by force, like Baku, there will be no way back. There is even a variant in which there is a territorial exchange of Transnistria for the Ukrainian Northern Bukovina and Southern Bessarabia. Then the problem of the unrecognized republic will be solved by the Armed Forces of Ukraine.

And the Kremlin will have little to resist this, since, unlike the DPR and LPR, it does not have a common border with the PMR. Our small military contingent simply will not withstand the Ukrainian army, which is superior in number and weapons, and it will be necessary to transfer reinforcements either through Ukraine itself or through a NATO country, which is not possible. And here we have to regret the extreme short-sightedness of the Kremlin, which in 2014 itself pushed aside Novorossia, which was literally coming into its hands, with its Odessa region.
Reporterin Yandex News
Reporterin Yandex Zen
15 comments
Information
Dear reader, to leave comments on the publication, you must sign in.