Turkish Stream turned into another defeat for Gazprom 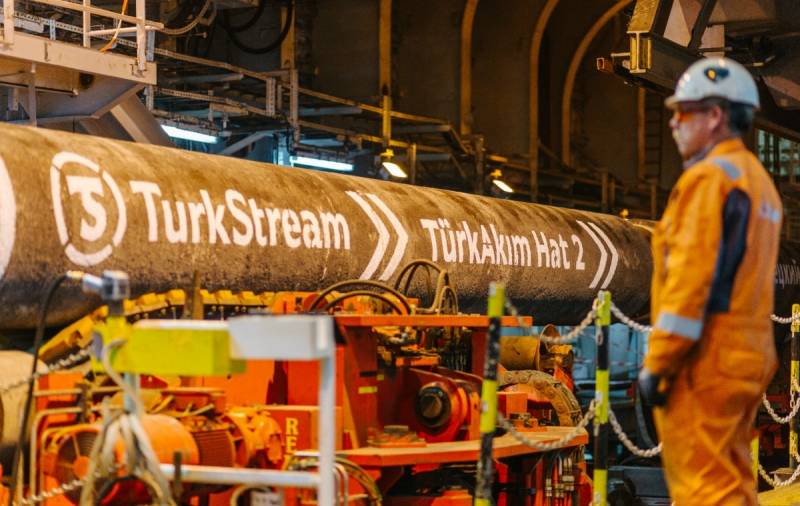 While everyone's attention is riveted on yet another forced pause in the construction of the Nord Stream 2 gas pipeline, problems with another domestic energy project, the Turkish Stream, have temporarily faded into the background in the information flow. Nevertheless, the situation in this direction, alas, is not much different from the "great construction" permanently stopped in the Baltic Sea.


A more thoughtful consideration of it, one can come to the conclusion that things are even worse here. Why is that? Let's try to figure it out.

And the gas is still there ...

I am sure everyone remembers quite well the numerous frictions that have arisen recently between Moscow and Sofia due to the disruption of the latter of all conceivable and inconceivable terms of laying the Bulgarian section of the pipeline connecting Turkey and the countries of Southern and Southeastern Europe, where the Russian "Blue fuel". I will clarify - all work on the territory of this country should have been completed on May 31 of this year. However, a lot of things, that is, excuse me, gas is still there ... The Bulgarian Prime Minister Boyko Borisov, perhaps, put to shame both the Grimm brothers and all the other famous storytellers of world literature, inventing more and more reasons for the unfinished trenches that were not laid in time for pipes and pits at the site of compressor stations, which should have cheerfully pumped gas to consumers for a long time. The culprit in all this, according to him, was either the coronavirus pandemic, because of which it was not possible to recruit workers abroad (the Bulgarians themselves, apparently, had forgotten how to build something), or the archaeologists, who forbade laying pipes in areas where in the land was supposedly hidden reminders of antiquity, then something else ...

In fact, it was perfectly clear to everyone that the real reason lies elsewhere. Borisov, who visited Washington about a year ago, received absolutely clear "instructions" there, including regarding participation in joint energy projects with Russia. In the White House, he vowed to "diversify" and "reduce the country's dependence on Gazprom supplies." So, apparently, he is fulfilling these promises conscientiously, despite the fact that they were actually given to the former President of the United States.

At the same time, Bulgaria itself, despite the fact that its Energy Minister Temenzhuka Petkova, even during the American voyage, threatened to “halve purchases of Russian gas”, has been receiving “blue fuel” quite regularly since the beginning of 2020. Moreover, she managed to literally "squeeze" a very decent discount on this energy carrier out of Moscow, resorting to elementary blackmail: "Do not lower the price, we will turn to the European Commission with a demand for an antimonopoly investigation." In short, one can hardly describe the cooperation between Moscow and Sofia in the field of energy supplies other than the word “failure”. For our country, of course ... However, Gazprom had sincere hopes that sooner or later, the Bulgarian side will nevertheless fulfill its obligations - it will complete the construction, launch it, put it into operation. They thought: "We would only be able to reach Serbia, but it will be easier there - gas will go to Hungary, Slovakia, the Balkans!" We got it ...

As it became known the day before, problems regarding the continuation of the "Turkish Stream" began with "Gazprom" already with its Serbian partners. By God, there is a feeling that there is some kind of championship in betrayal among those countries that, shall we say, owe something to Russia and are almost the most “friends” with her. (The same Borisov, no one was pulling his tongue about the "older brother" who "always forgives.") Specifically, we are talking about the fact that the President of the Serbian Association of Natural Gas Vojislav Vuletic said: about the launch of gas along the route specified above, provided for the construction of the pipeline , earlier than the middle of next year and there can be no question! Bulgaria, it seems, has finally become a “final stop” for Russian energy carriers. And for how long is already extremely difficult to say.

Or maybe we have enough "streams"?

And this is despite the fact that the start of gas transit to Serbia and further was originally planned for the first half of this year. The Bulgarians failed. Nevertheless, the head of the Serbian state-owned company Serbiyagas, Dusan Bayatovic, argued back in November that the already overly protracted work would be completed by the end of 2020. Will not. The reason is simple: the Serbian side expects to commission the compressor station necessary for pumping "blue fuel" no earlier than May 2021. How so? After all, the same Bayatovic cheerfully reported that the joint venture of Serbiyagaz and Gazprom Gastrans had completed the laying of all 403 kilometers of pipes required to ensure the operation of the Serbian section, back in December last year! Generally speaking, this segment of the "Turkish stream" does not pull the "construction of the century" in any way - "entering" the country from Bulgaria in the town of Zajecar and moving to the Hungarian territory in Khorgosh, according to the project, it should have included, in addition to pipes, the named above the length, one compressor station and 4 metering units. Was it really impossible to manage in a year? Displaying more than strange sluggishness, Belgrade blocks the transportation of more than 3 billion cubic meters of gas a year.

However, the whole point is that these are, by and large, Russia's problems. The Serbs will not be left without "blue fuel" - only Gazprom will have to supply it using the Ukrainian GTS. Many, I remember, said that the transit agreement concluded between Moscow and Kiev is not only a bondage, but also a trap for the future. It looks like their gloomy predictions are starting to come true. Let me remind you that according to the terms of the agreement, in 2020 Russia pays “non-cash” for pumping 65 billion cubic meters of gas. Starting next year, the volume should have dropped to 40 billion - and precisely thanks to the launch of our "streams", But it didn't work out ...

Now, for any additional volume passing through Ukrainian pipes, our country will have to pay extra. There is no doubt that Kiev, taking this opportunity, will push the price beyond all possible limits. Gazprom will face a not very pleasant choice: to disrupt supplies and pay fines, or to fulfill the predatory conditions of the Ukrainian side. And it's good if they limit themselves exclusively to monetary requirements. The situation, which is quite unpleasant in itself, looks even more unpleasant in the light of the recent actions of the Serbian side. Such, for example, as the refusal to participate in the exercises "Slavic Brotherhood", which followed after the first shout of Brussels, a sharp increase in cooperation with the United States and the like. It is quite possible to assume that in this case, too, the matter is not at all in some problems that actually arose with the construction (especially since there was more than enough time for its completion), but in the teams received by Belgrade - either from the EU, or from USA. No matter how bitter it is to admit it, the Serbian side may well prove its loyalty to the “new friends” in this way. Yes, in fact, taking into account all the details, it is difficult to find another explanation. And if this is so, then the Turkish Stream project, by and large, can be given up.

What did Russia gain in reality from its implementation? Deliveries to Turkey? It's a strange thing - the volume of Russian "blue fuel" purchased by Ankara fell from 29 billion cubic meters in 2017 to 15.5 billion in 2019. The situation with Bulgaria is described in detail above - it also intends to reduce consumption, and even at the same time extorts extortionate discounts. Was it worth building a garden? And the moments described above are far from all and not even the main problems of Gazprom in the South direction. There are others - and much more serious.

While the Bulgarians and Serbs were portraying "stormy activity", in fact, a competitor entered the ranks of the Turkish Stream, quietly burying it and discrediting it as such. The press service of the TAP AG consortium announced last month that the Trans-Adriatic Gas Pipeline (TAP) is not only fully technically ready for launch, but is already filled with gas in the section from the Greek-Turkish border to the receiving terminal located in southern Italy. There was little left to do - "the completion of preparations for the launch of commercial operations." This pipeline, which has a length of about 880 kilometers, is to ensure the supply of initially 10 billion cubic meters of gas from Azerbaijan to Europe with the prospect of doubling this volume.

It must be said that the implementation of this project, the shareholders of which are British BP, Azerbaijani Socar, Italian Snam, Belgian Fluxys, Spanish Enagás and Swiss Axpo, was carried out without those annoying hesitation and delays that stubbornly pursue Turkish Stream, becoming moreover with each time everything is more irresistible. It seems that we were once again beaten in the gas "race" and it will now be extremely difficult to do anything about it. And what can be done here at all - apart from calculating the inevitable losses?

This, however, is also not all. We are going to be crowded not only in Europe. Not so long ago, the general director of such a serious company as Saudi Aramco, Amin Nasser, announced his intention to "provide" blue fuel "to one of its largest consumers - China. This is a very real prospect, which can have very, very unpleasant consequences for Russia. Today, despite all the efforts made to this, our country has not turned into its main supplier for the Celestial Empire with its colossal level of gas consumption (more than 300 billion cubic meters per year). In the field of pipeline energy supplies in the Chinese market, Turkmenistan is ahead of us. In terms of LNG, the first are the Australians. If Saudi Arabia is also involved with its proven reserves of 7 trillion cubic meters of "blue fuel" and an extremely bad habit of dumping ...

Taking into account all of the above, as well as the desire of the same European Union to maximize "decarbonization" of its own economics and habitat, which also does not promise positive prospects for domestic energy exports, it would probably be worthwhile to think not even about the day after tomorrow, but literally about what is about to happen. Even defeat may not be a failure - but only if you draw the right conclusions from it in time.
Ctrl Enter
Noticed oshЫbku Highlight text and press. Ctrl + Enter
We are
US slows down the completion of Russian gas pipelines: why is this in the hands of Moscow
Peace enforcement operation. Russia inflicts a preemptive strike on Kiev
Reporterin Yandex News
Read Reporterin Google News
8 comments
Information
Dear reader, to leave comments on the publication, you must sign in.