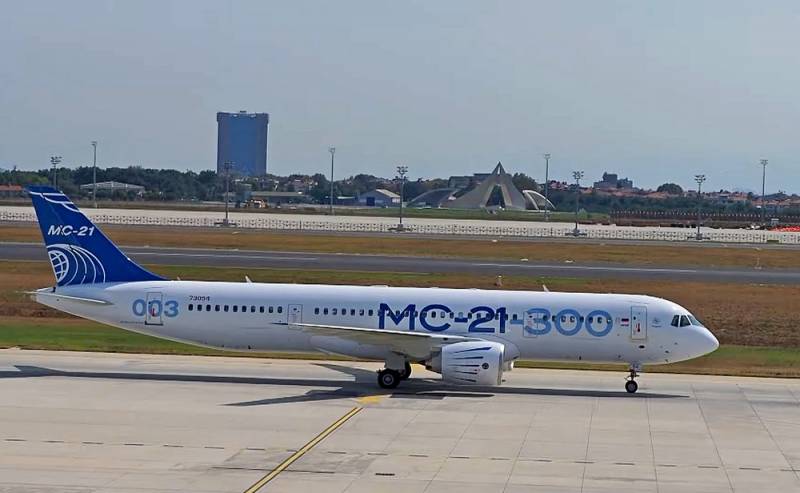 The Trump administration, which is either leaving or not, has dealt a powerful sanctions blow against 89 Chinese defense companies. At the same time, 28 Russian enterprises, noticed in cooperation with the PRC, also "flew in". Everyone got it: the Ministry of Defense of the Russian Federation, and Roskosmos, and Rosatom, and the civil aircraft industry. Now it is not clear, in particular, when the promising MC-21 airliner will be launched into series and will fly.


I would like to remind you that we warned about the upcoming problems for aircraft manufacturers back in ARTICLES dated October 1, 2020. The unique market situation and gigantic problems faced by two of the world's leading aircraft manufacturers, Boeing and Airbus, give Russia a rare chance to return and occupy, albeit a small, but its own niche with the MS-21 airliner. This narrow-body medium-range aircraft is quite competitive with American and European counterparts. The bottleneck of this project, like the Superjet, was the close international cooperation in their creation.

Both liners have a high percentage of imported components. Dependence on substandard French aircraft engines has already played a cruel joke on the Superjet, which is forced to stand idle, waiting for the delivery of parts for repair, instead of flying. The use of imported composite materials in the design of the MS-21 wings also threw this medium-haul liner far back after the US imposed sanctions on its sale to Russia. We seem to have coped with setting up the production of analogs of composite materials, but the story, alas, does not end there. Both MS-21 and Superjet remain critically dependent on foreign electronic systems and mechanical components. The United States hit this weak spot.

In early October, the representative of the Ministry of Industry and Trade, Vasily Shpak, complained that foreign manufacturers of aircraft components had warned about the impossibility of continuing to fulfill their obligations to Russia. At that time, the United Aircraft Corporation found a temporary solution by purchasing in bulk for the future in bulk the maximum number of components and assemblies. It is quite obvious that it is impossible to revive the civil aircraft industry using the purchased stocks, therefore import substitution is necessary. And now with this additional difficulties will arise.

The new US sanctions target, in particular, a group of enterprises operating in the aircraft construction sector: manufacturers of aircraft engines and other components, as well as helicopters. Among them, for example, Aviazapchast JSC and Elekon Plant JSC. The latter specializes in the development of radio and electronic products that are used in the aviation and space industries. Note that the United States began to aim at everything that is high-tech that still remains in our country: space, nuclear energy, the military-industrial complex, aircraft construction.

I would like to mention space separately. As we said earlier, the share of foreign electronic components in Russian space is 20%, and in the defense industry - all 40%. These are the natural consequences of the vicious economic policy under the slogan "we will buy everything we need abroad for petrodollars." Now you have to pay dearly for this. But will the right conclusions be drawn? You can, of course, take a simple path and jump on the same rake a second time by starting to buy electronic components in China, but, by the way, our Chinese friends immediately raised the prices for their products. Nothing personal just business.
Ctrl Enter
Noticed oshЫbku Highlight text and press. Ctrl + Enter
We are
Promising MS-21 should not repeat the mistakes of the "Superjet"
Peace enforcement operation. Russia inflicts a preemptive strike on Kiev
Reporterin Yandex News
Read Reporterin Google News
15 comments
Information
Dear reader, to leave comments on the publication, you must sign in.