"Nothing is over yet": Armenia is being dragged into a new war 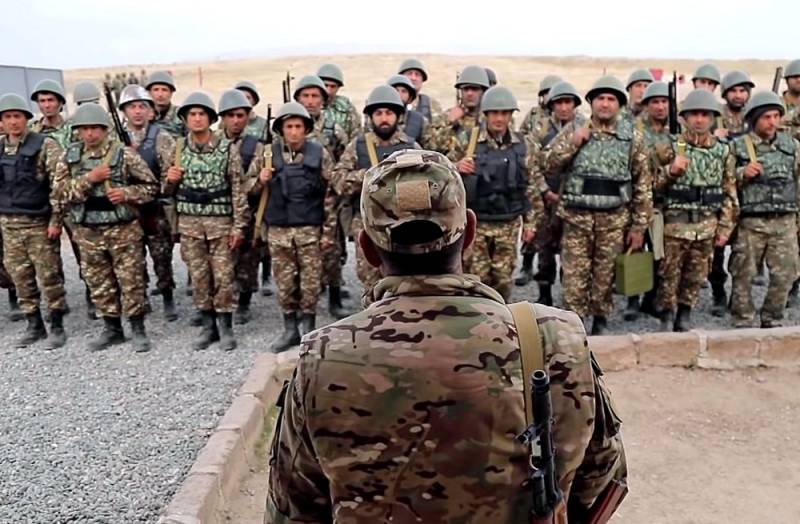 The Armenian parliament flatly refused to cancel the martial law introduced in the country. And this is despite the fact that hostilities in Nagorno-Karabakh have been completely stopped, and the Russian peacekeeping contingent has stood between the warring parties. What is the reason? Most likely, it lies in the fact that too many people think that "nothing is over yet."


At the same time, we are talking not only about the moods of a large number of Armenians themselves, but also about external forces, which did not like the current version of resolving the crisis at all. Paradoxical as it may seem, however, it is precisely by abandoning the restrictions and severity of the martial law introduced in the country on September 7 that Yerevan risks facing such problems and instability that can easily end in a crisis much larger and deeper than Nagorno-Karabakh.

Save Pashinyan? No, to keep Armenia over the abyss ...

Obviously, proceeding from the principle: “whatever happens,” 56 deputies of the Armenian parliament during its extraordinary meeting, the main issue on the agenda of which was the country's transition to a “peaceful regime”, voted against such a step. 36 were in favor, and 33 elected representatives of the people generally preferred not to appear at the fateful session. The ruling Our Step party, which supports the incumbent Prime Minister Nikol Pashinyan, justifies its own position quite simply: the new border with Azerbaijan, formed as a result of the peace agreements signed in Moscow, with a length of more than half a thousand kilometers, is now reliably "covered" with no one and nothing. Based on the first point, the danger of a resumption of hostilities still exists, so it's too early to relax and talk about the end of the war. It sounds quite logical, but at the same time everyone understands perfectly well that the obstacle to the new Azerbaijani-Turkish offensive is not at all the "military" status assigned to itself by Yerevan, but the position of Moscow. Rather, the specific presence of its peacekeeping forces in the region.

In fact, the real reason for the decision of parliamentarians lies in a completely different plane, purely internal. The abolition of martial law will automatically mean the lifting of bans on any mass events, including protest rallies, which have already been pacified with great difficulty. Undoubtedly, consolidated after the conclusion, to put it mildly, unfavorable for the Armenian side of the world, the local opposition uses this freedom to sharply intensify its own activity, aimed today at one goal - the removal of Nikol Pashinyan from the post of Prime Minister.

For example, the leader of the “Prosperous Armenia” party Shake Isakian, who called the martial law “purely declarative”, stated her firm intention to achieve his removal from power. Support her and policy from the party "Enlightened Armenia", also belonging to the opposition camp, as well as many other public figures, as well as ordinary citizens. The incumbent head of state is unlikely to be able to wash away the stigma of a “capitulator” and almost a “traitor of national interests”, despite the vigorous activity he has developed today and the “road maps” presented to the public, in which we are talking about intentions to settle many issues in the near future: from assistance to the families of the victims before strengthening the country's defense capability.

At the same time, the same "Prosperous Armenia" and many other ardent opponents of Pashinyan are a priori called by some media (mainly in the West) nothing but "pro-Russian politicians." One cannot agree with such an extremely simplified and unreasonable approach. It is not without reason that Vladimir Putin not so long ago quite clearly characterized any attempts to change the government in Armenia (especially of a revolutionary nature) as "suicide", which the country, which is in danger of a renewed war, simply "cannot afford." The position is expressed very specifically: of course, Pashinyan is absolutely not the person Moscow would like to see at the head of Armenia, but the problem is that any other option is fraught with too great a risk. According to the laws of big politics, those who will overthrow him, playing on the feelings of Armenians, who are deeply experiencing "shameful surrender", should call for alternative actions - that is, following elementary logic, for a "war to a victorious end", which will inevitably end in disaster not only for Karabakh, but for the whole of Armenia. And also - big problems for Russia ...

"Great French Resolution" - "peacekeepers" who were not called

It is not for nothing that the representatives of the Our Step party, who are diving with their opponents, stated that, casting doubt on the actions of the current prime minister, the opposition should, first of all, declare that they reject Moscow's mediation in resolving the crisis, refuse the help of its peacekeepers and, at the same time, present a clear and realistic plan for the continuation of hostilities ... It is clear that no one wants to assume political responsibility of this level. Much more real (and more dangerous) may be another scenario in which the “revolutionaries” will decide to resume hostilities without any plan or real possibilities, hoping at a critical moment to “hide behind the back” of Russia. Do you think no one has such plans? Let me disagree - there are historical precedents, alas. The same Serbia in 1914 would not have behaved so defiantly with Austria-Hungary if it had not been firmly convinced that the Russian Empire would enter the war on its side. It just ended very badly for everyone ...

There is another option - no less, however, suicidal. Today, to "unfreeze" the conflict in the Caucasus, which was settled with such difficulty by our country, certain forces in Armenia have begun to push the West. What is the only resolution of the French Senate with a loud title "On the need for the recognition of the Nagorno-Karabakh Republic"! All the time, when shots rang out in the mountains and the blood of Azerbaijanis and the same Armenians, who were now remembered in Paris, flowed like a river, they sat there quietly and did not interfere. However, now, when the peace, albeit fragile, has been established, they "came to their senses." In fact, the document, which, by the way, has already been called (and quite rightly) in Baku "an empty piece of paper" is nothing more than incitement and an attempt to "replay" the agreements reached without any participation of the French side.

Okay, "providing humanitarian aid" - no one argues with that. Prove your right. Would you like to "investigate Turkey's involvement in the military conflict" is also not a question. If someone, of course, will let you do it. But with what joy is it to talk about "protecting Armenia with the help of an international contingent"? The contingent is already there, if you, Monsieur and Madame, did not notice it. Are you going to expel? In fact, the French senators' demarche is directed against Russia to about the same extent as against Turkey, with which Paris is now in perhaps the most severe confrontation in all recent decades. In the European Parliament, the French have already achieved their goal - this body has officially called on the European Commission to impose "the most severe sanctions" against Ankara, but why try to drag Armenia into these "showdowns"?

The situation is somewhat mitigated by the statement of the French Foreign Ministry that no recognition of Nagorno-Karabakh will follow at the governmental level. However, in this case, as the saying goes, "a chain reaction has started" - the German parliament has suddenly become sharply concerned about the fate of this region. Most of the deputies of the Bundestag, members of the so-called "grand coalition", just yesterday supported the official statement, which says that "Germany should take an active part in the settlement of the Karabakh crisis." Realized in time ... The document also contains reproaches against Turkey and, of course, Russia, which, it turns out, "with the help of separate agreements, promote the interests of individual parties in the region", and even "pursue their own political goals." The cynicism and hypocrisy of the West's "double standards", as usual, have no limits.

What is the real danger of this kind of "signals", which are more and more animatedly sent to Armenia by the "world community", who did not put a finger on their fingers for the sake of its salvation and support during the most difficult stages of the "hot" phase of confrontation with Azerbaijan? First of all, they are playing into the hands of those forces in the country that take not a far-fetched, but a very real anti-Russian position, and dream of using the current military defeat of Yerevan to completely and completely "tear" it away from Moscow. The reasoning in this case is very simple: “You see, the Russians agreed to our defeat, so that the“ ancestral lands of Artsakh ”would again be in the power of Baku. And the "real friends" of Armenia from Paris (Berlin, Brussels and so on) are ready to stand up for us like a mountain, and not only against Azerbaijan, but also against Turkey! Let's terminate the shameful agreements imposed on us by Russia and turn to the West for help! " Well, yes, everything is according to the classics: "abroad will help us" ...

At the same time, the side avoids the extremely important moment that Turkey, like all the countries listed above, is a member of NATO and, therefore, no European country will actually resist its belligerent inclinations in the Caucasus. Maximum - they will express "deep concern", "sincere indignation" and send a plane or two of "humanitarian aid". Or maybe they won't - they themselves have a crisis.

No matter how difficult the current agreements are for Armenia and Nagorno-Karabakh, any attempt to revise them, any deviation from their strict implementation will mean only one thing - war. Yerevan cannot win it under any circumstances. And this, by the way, is quite clearly understood in the local Ministry of Defense, which supported the refusal to lift martial law precisely because of the "threat of internal destabilization in the country", which will most likely result in the resumption of fighting.

Worst of all, our country is unlikely to have a chance this time to avoid being drawn into hostilities. And this must be prevented at any cost - even by preserving for some time the political power in the country that is not the most acceptable for Russia. The current prime minister will still have to leave sooner or later, but it will be extremely difficult to stop a new war in the Caucasus.
Reporterin Yandex News
Reporterin Yandex Zen
10 comments
Information
Dear reader, to leave comments on the publication, you must sign in.